Despite the strengthening of the British pound against the US dollar by 0.33%, the future prospects of the GBP/USD currency pair remain in doubt. We will talk in detail about this and other nuances in the technical part of the analysis of the pound/dollar pair, but for now, briefly about the external background and macroeconomic indicators that can and have already affected the price dynamics of the trading instrument in question.

To begin with, the data last Friday on the US labor market showed a mixed trend. Let me remind you that the number of newly created jobs in the non-agricultural sectors of the American economy fell slightly short of the forecast value of 50 thousand, and came out at the level of 49 thousand. In principle, the same applies to wage growth, which in the first month of the new year was 0.2%, even though the average hourly wage was expected to grow by 0.3%. The only thing that really impressed me was the sharp drop in the unemployment rate from 6.7% to 6.3%. Thus, we can conclude that the US economy is not recovering as fast as many economists expected. Although there is nothing unusual or extraordinary not because Fed Chairman Jerome Powell and several other high-ranking officials of the U.S. Central Bank has repeatedly noted that the pace of recovery in the world’s largest economy fell slightly, and maybe the recovery from the negative effects of the pandemic COVID-19 will require a longer period of time. The more that the United States was hit by the epidemic of coronavirus, what is called, in full and keep the sad leadership in the number of deaths from COVID-19.

It is worth remembering that last Thursday, a regular meeting of the Bank of England was held, following which no changes were made to the monetary policy. The key interest rate, as expected, remained at 0.10% and the volume of bond purchases did not change and remained at 875 billion pounds. Since the accompanying statement and the speech of the head of the Bank of England, Andrew Bailey, did not have a pronounced “dovish” tone, which many market participants expected, the British currency received support and, largely due to this, ended last week with an increase against the US dollar 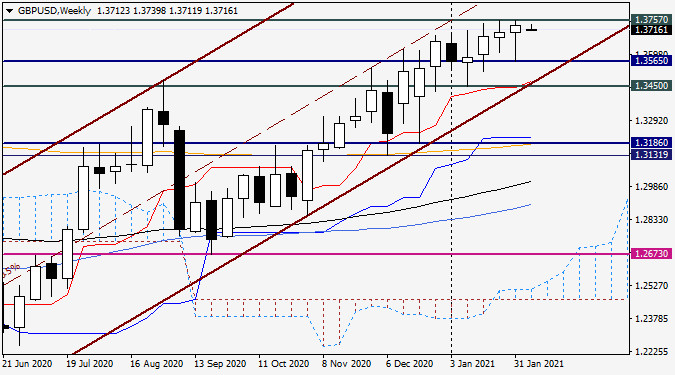 Immediately it is worth noting that the last weekly candle, which was drawn on the corresponding time frame does not give a clear understanding for the further price direction of the pound/dollar currency pair. Despite the small bullish body of this candle, its shape is very close to the reversal pattern of the “Hanged” or “Hanged” Candle Analysis. In addition, it appeared at the very top of the upward trend and the strong resistance of sellers at 1.3757 remained unbroken. On the other hand, the last weekly candle can be viewed from a different angle. A long lower shadow (or tail) with lows at 1.3565, clearly demonstrated the reluctance of market participants to continue moving the quote in the south direction. As of this moment, the pair is trading in the range of 1.3757 to 1.3565, and the further direction of GBP/USD will depend on which side the exit from the designated range will take place, possibly even in the medium term. A confident close of the current weekly trading above the resistance level of 1.3757 will indicate the subsequent pull of the pair to growth. If the bears on the pound manage to update the previous lows at 1.3565 and close the week below this level, it is likely that the British currency will decline further against the US dollar. 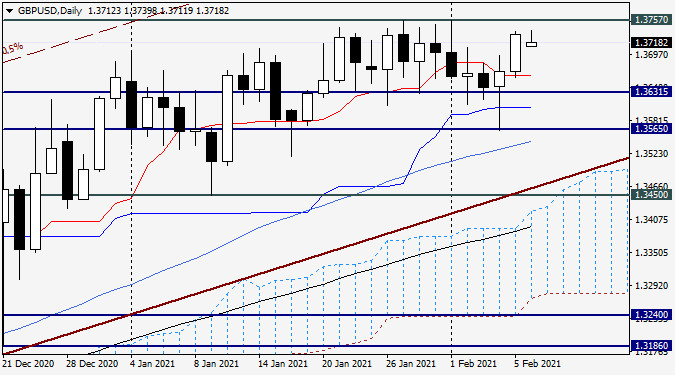 As we can see on the daily chart, it is very clear that the pair found strong support near the red line of the Tenkan Ichimoku indicator last Friday, after which it showed an impressive growth. Trading on the first day of the current five-day trading period, the quote also began with a strengthening. At least, at the end of this article, the pair is trading with a fairly good increase, near 1.3737, and, apparently, it will once again test the resistance level of sellers at 1.3757. Once again, I want to draw your attention to the fact that the closing of one daily candle above 1.3757 will be clearly insufficient reason to consider this level truly broken. But the consolidation of three consecutive daily candles above 1.3757 and the subsequent pullback to the price zone of 1.3760 – 1.3750 will be a good reason to open a pair of long positions. Since if this happens, which is clearly not today, I suggest that we take a pause to open a new position in the pair. You will agree that buying under the resistance is not the best trading idea. Although, those traders who use a breakout strategy can try to buy on the breakout of the resistance level of 1.3757, but with small goals, from 20 to 45 points. Another option for purchases looks technically justified and at more favorable prices after a short-term decline in GBP/USD in the price zone of 1.3700 – 1.3685 and the appearance of bullish candlesticks on smaller time intervals, to a detailed analysis of which we will return in tomorrow’s article on the pound/dollar pair. For possible sales, it is also worth waiting for the corresponding signals that will appear under 1.3757 on the hourly and (or) four-hour charts.