Only one long entry signal was generated last Friday. Let’s take a look at the 5-minute chart and break down the entry point. We can see how even before the US labor market report was released, the bulls are trying to break through and consolidate above the resistance of 1.3688. Being able to test this level from top to bottom leads to forming a signal to open long positions. As a result, after the report was released, one could observe the strengthening of the GBP/USD pair. The pound’s gain came even against the backdrop of the strong non-farm employment report and a decline in overall US unemployment, as many large traders took advantage of this moment and took long positions in the dollar. For the sake of fairness, it should be said that I personally did not leave long positions in the pound before this report came out, as I was confused by the breakdown of 1.3688. I left long positions after returning to this level. 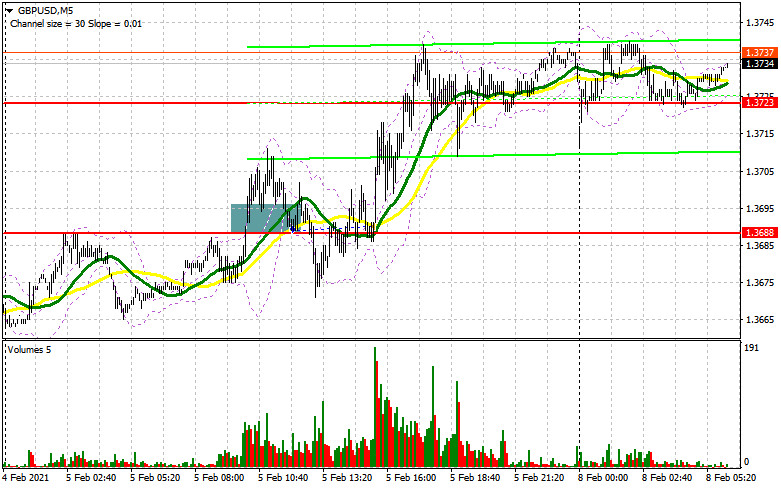 Bank of England Governor Andrew Bailey will speak today, and if he does not touch upon the topic of negative interest rates, then buyers will initially aim for resistance of 1.3757, on which a lot depends. A breakout and being able to surpass this level, along with a downward test creates an excellent buy signal in sustaining the bull market. Surpassing 1.3757 will also allow the quote to leave the wide horizontal channel, which will hit a number of stop orders of major sellers above this level and, accordingly, lead to a larger rally in GBP/USD. In this case, you can count on updating the high at 1.3791 and an exit to resistance at 1.3825, where I recommend taking profits. If the pound is under pressure after Bailey’s speech, then forming a false breakout in the 1.3723 area will be a signal for you to open new long positions. If buyers are not active in this range, it is best to wait for a downward correction to the support area of 1.3688, where the moving averages pass, playing on the side of buyers. You can open long positions on a rebound in that area, counting on an upward correction of 20-25 points within the day. Bigger support comes at 1.3645.

The bears will count on forming a false breakout in the resistance area of 1.3757. This scenario will limit the upward potential of the pound and create a new signal to sell. A more important task is to regain control of support at 1.3723, which they missed in today’s Asian session. We can expect the pound to be under pressure if Bailey raises the topic of negative interest rates, leaving the possibility of their introduction in the future if necessary. In this case, a breakout and consolidation below 1.3723 can be seen. Testing this level from the bottom up creates a good signal to sell GBP/USD in order to renew support at 1.3688, where I recommend taking profit. The low of 1.3645 is a distant target. If GBP/USD does not rapidly fall after a false breakdown in the resistance area of 1.3757, then it is best not to rush to sell, but wait for a new wave of growth and an exit to a high of 1.3791, from which you can open short positions immediately on a rebound, counting on a downward correction in 20-25 points within a day. The next major resistance is seen at 1.3825. 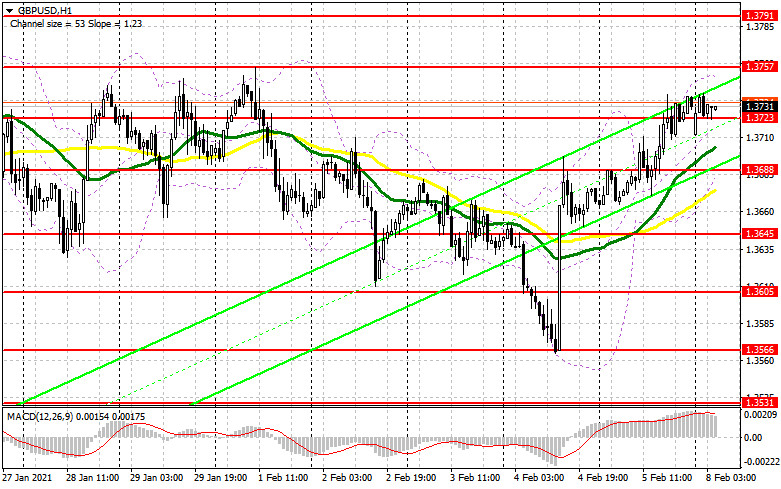 Trading is conducted above 30 and 50 moving averages, which indicates a succeeding recovery for the pair.