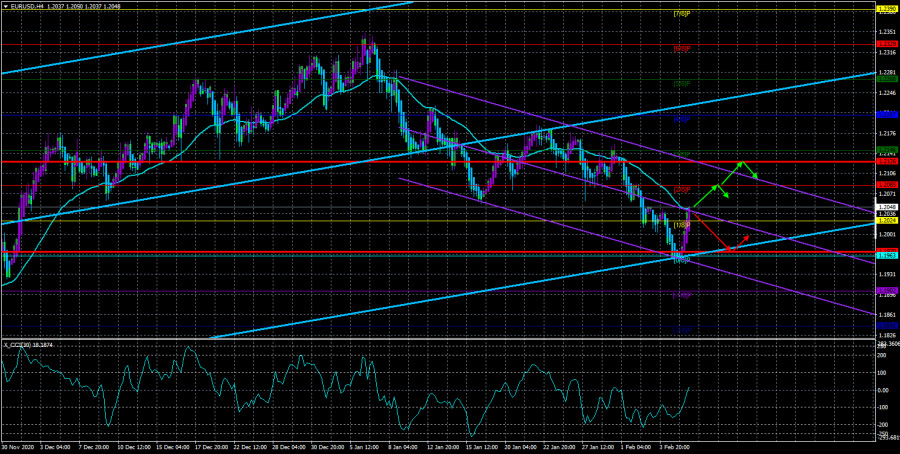 The EUR/USD currency pair on Friday, February 5, began an upward correction and worked out the moving average line by the end of the trading day. Thus, despite the growth of the pair by 90 points, the downward trend remains relevant, as the price remains below the moving average. Therefore, in the event of a price rebound from the moving average, the downward movement may well resume (according to the “Linear Regression Channels” trading strategy), however, overcoming the moving average line will open a further path for quotes to the north. So, on Monday, everything will depend on overcoming or not overcoming the moving average. As for the “foundation” and “macroeconomics”, in previous articles, we have already concluded that 90% of macroeconomic statistics continue to be ignored, and among the fundamental factors, we distinguish two that presumably have a long-term impact on the euro/dollar pair. Some readers might argue that the dollar was falling on Friday and the Nonfarm Payrolls report was weak, however, we once again draw your attention: the dollar was falling all day, and the report was released only in the afternoon.

Meanwhile, on Sunday, February 7, ECB President Christine Lagarde gave an interview to the French edition of Le Journal du Dimanche. The head of the ECB said that due to the global coronavirus pandemic, the economic recovery will not begin until mid-2021. “We hope that 2021 will be a year of recovery,” Lagarde said, “But we must recognize that uncertainty remains. Everyone is looking forward to the economic recovery, however, we are not immune to new, unknown risks. Let’s be honest with each other: we will not return to pre-crisis levels until mid-2022.” According to Christine Lagarde, GDP growth is expected to be around 4% or slightly lower in 2021. “Much will depend on the vaccination of the world’s population. The faster all countries vaccinate a large part of their population, the faster the whole world will be able to return to normal life. Also, much will depend on the measures of the authorities, which will be a response to the events in the health sector,” Lagarde said. The head of the ECB also said that the European Parliament has not yet ratified the recovery fund for 750 billion euros. Accordingly, the European Commission is not yet able to borrow funds, as planned in June last year. The European Commission can not distribute the funds, respectively, the beneficiary countries are still on starvation rations.

At the same time, Bloomberg writes that the European economy is recovering from the crisis more slowly than the American or Chinese. Even though the US economy lost a record 31% in the second quarter of last year, Bloomberg experts believe that the US economy can fully recover by the end of 2021, and the Chinese economy has already reached pre-crisis levels. In the eurozone, however, the economy began to contract again this winter due to quarantine restrictions, so it is likely to reach pre-crisis levels no earlier than the end of 2022.

But the topic of “coronavirus” for Europe means a lot now. And for the whole world. The latest forecasting models show that the whole world may be overwhelmed by the third wave of COVID-2019, although now we are talking about its more contagious strains. For example, the “British” strain is 1.5-1.75 times more contagious than the usual virus. This means not only that more people may get sick than during the first two waves, but also that tougher restrictive measures will be required to contain the spread of the virus. Thus, countries that are fully attentive to the health sector can introduce new “lockdowns” and “strict” quarantines, which will undoubtedly again negatively affect their recovery and GDP.

And the president of the European Commission, Ursula von der Leyen, said that the authorities underestimated the difficulties with the use of vaccines and their production. The head of the EC said that not enough funds were invested to increase production capacity. For example, official figures show that nine times as much money has been invested in the US to build up vaccine production capacity. Also, von der Leyen responded to criticism of the EU regarding the too slow process of vaccination of the population. The head of the European Commission compared some countries, in which the vaccination process is much faster, while the European Union is a tanker. Naturally, it is moving much more slowly, but the European approach in this matter is the right approach and guarantees the receipt of vaccines by all participating countries, even the poorest. At the moment, according to official data, only 3.22% of the population of the European Union has been vaccinated, while the UK has already vaccinated 15% of the population and Israel – 60%. “We focused more on getting the vaccine out there at all – on developing it. At the same time, we should have thought more about the issues of its mass production,” von der Leyen said. Because of the underestimation of potential problems, many in the European Union have high expectations about vaccination. “If I could turn back the clock, I would try to explain to people that we are moving forward, but this is a slow movement. We will face problems, delays because this is a completely new procedure for everyone,” the head of the European Commission concluded.

As for the prospects of the euro/dollar pair, they remain the same. As it turned out, the recovery fund in the European Union has not yet been ratified, but in the United States, Joe Biden’s “plan to save the economy” can be approved by Congress in the coming weeks. Thus, as we said earlier, $ 2 trillion can flow into the markets and the economy, which will provoke a new fall in the US currency. Thus, if we take the perspective of the next few months, we believe that the fall of the US currency will resume. At the beginning of the new trading week, we expect to overcome the moving average and move up at least another 100 points. However, we should not forget that a rebound from the moving average can trigger a new round of downward movement. 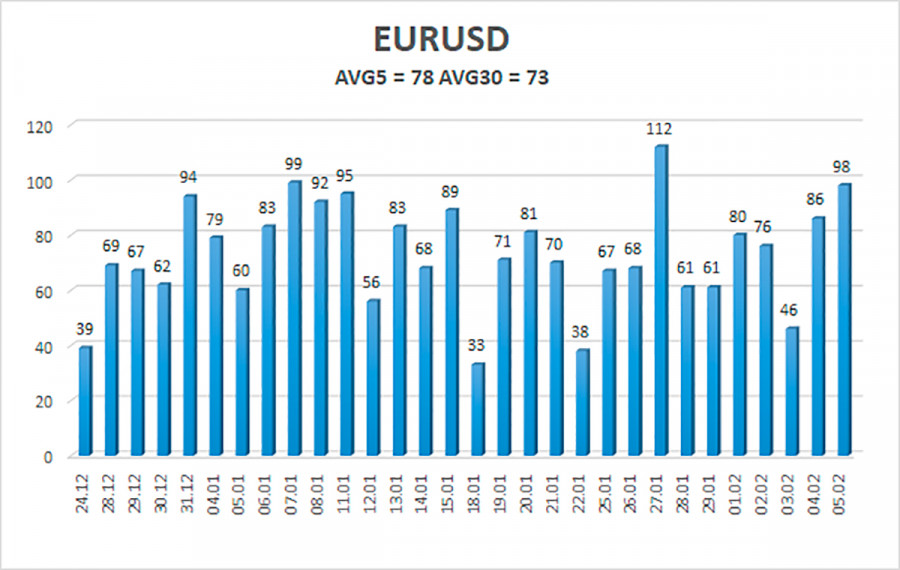 The volatility of the euro/dollar currency pair as of February 8 is 78 points and is characterized as “average”. Thus, we expect the pair to move today between the levels of 1.1970 and 1.2126. A reversal of the Heiken Ashi indicator downwards may signal a new round of downward movement.