Bitcoin is flirting with the 40,000 psychological level after ending its minor retreat. The rate came back down only to retest the static support, an obstacle, before resuming its major uptrend.

Technically, it indicated that its corrective phase was over and that buyers could take the lead driving the rate at least until the 41,986 all-time high. Also, fundamentally, it remains strongly bullish, so further growth should not be a surprise. 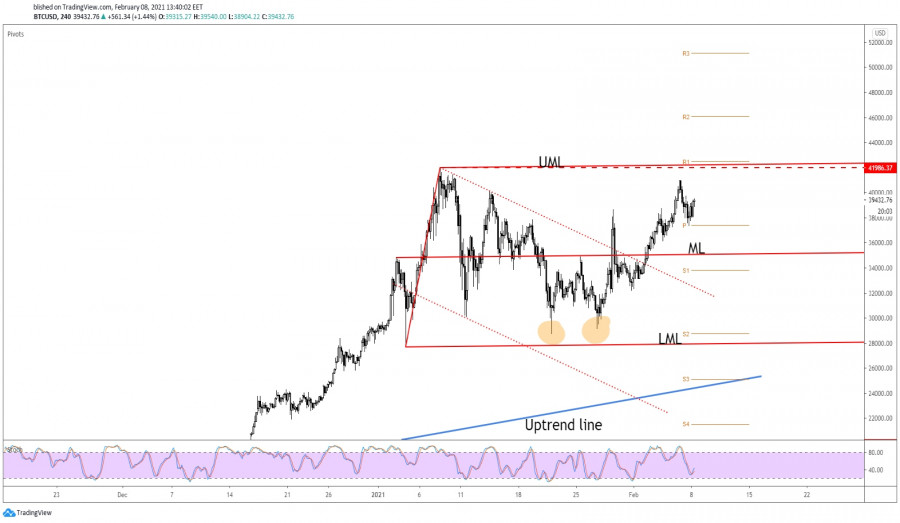 Breaking above the 38,769 level confirmed bulls’ power and announced that BTC/USD could climb above the 41,986 historical high. The price slipped lower to retest the Pivot Point (37,409) before trying to take out the resistance represented by the upper median line (UML) and by the R1 (42,480).

Closing above the 38,664 high represented a long signal. The temporary retreat could help us to go long as well. Also, the rate’s incapacity to reach the lower median line (LML) indicates an upside breakout through the upper median line (UML). Such a breakout to a new higher high could bring a new long opportunity.

Personally, I believe that the upside scenario is safe as long as BTC/USD is located above the pitchfork’s median line (ML) and above the S1 (33,820).