EUR/USD increased again during Friday’s session due to worse than expected Non-Farm Payrolls data. The NFP indicator reported only 49K jobs versus 85K expected, while the Average Hourly Earnings increased only by 0.2% compared to 0.3% estimated by specialists.

Surprisingly, the US Unemployment Rate dropped from 6.7% to 6.3%. Economists had expected the rate to remain steady at 6.7%. Still, the rebound could be only a temporary phenomenon before it drops deeper. 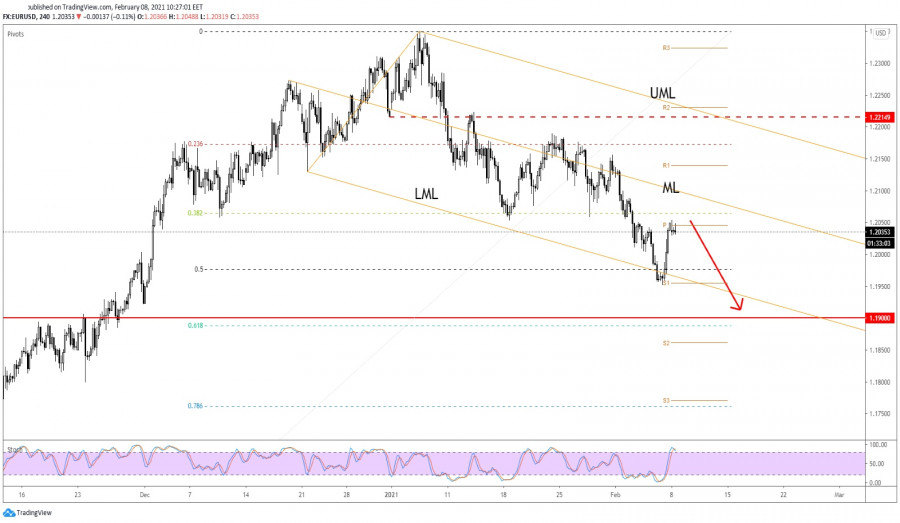 EUR/USD returned tp the level above the 1.2 psychological level as the USDX slipped lower in the short term. The pair found support right on the S1 (1.1955), just under the 50% retracement level, and below the descending pitchfork’s lower median line (LML).

The price reached the Pivot Point (1.2045) and now, it is trading in the red again. Last week I told you that the outlook would remain bearish as EUR/USD stayed under the descending pitchfork’s median line (ML).

Personally, I’m expecting to see a broader drop in the upcoming period after reaching and dropping through the descending pitchfork’s lower median line (LML).

A false breakout with great separation through the immediate resistance levels or a major bearish engulfing brings a new selling opportunity. Also, a drop and fixation under the 1.1952 former low and below the lower median line (LML) indicates a bearish movement towards S2 (1.1861) or lower.