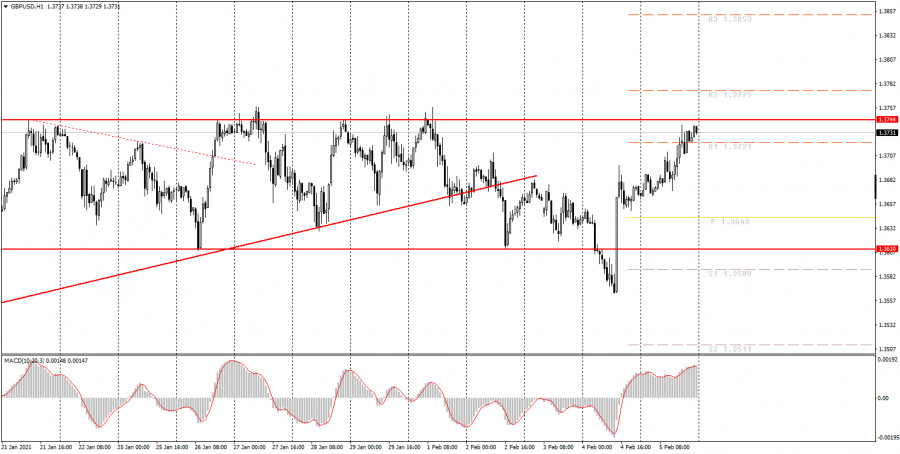 The GBP/USD pair started and continued its upward movement on Thursday and Friday. It began after summing up and announcing the results of the Bank of England meeting. Thus, the price returned to the 1.3744 level by the end of the last trading day of the week, although it did not work out it for the seventh time. In our last review on the pound, we did not recommend trading bullish and warned that trading down is associated with increased risks. In fact, any positions on the pound are now associated with increased risks. We have repeatedly said that the pair is now moving in different directions and there is no logic in its movements. As a result, the pair’s quotes continued to grow. The MACD indicator turned down several times at once during Friday, but there is no downward trend at this time. Moreover, the upward movement continued throughout Friday, so the downward reversals of the indicator are the uncorrelation between its readings and the price movement. In general, you shouldn’t have traded that day. As for the future prospects, we only see one opportunity to open positions on the pound. This is the 1.3745 level and a possible rebound from it or overcoming it. In the first case, as you might guess, it will be possible to trade for a fall, in the second – for an increase.

No macroeconomic report from the UK on Friday, February 5, and Bank of England Governor Andrew Bailey did not report anything interesting to the markets. Therefore, traders did not have much to react to during the day. It was reported in America that the US Congress may approve a new stimulus package for the economy in the near future, which includes payments to the unemployed and simply all Americans as part of anti-crisis measures. We believe that this may cause the US dollar to resume its decline in the medium term. No more important news.

No major macroeconomic report or event scheduled in either the UK or the European Union on Monday, February 8. We believe that on this day everything will depend on technical factors, so we advise you to pay attention to them. The British currency will storm the 1.3744 level again for the seventh time. The pound’s succeeding prospects depend on being able to surpass them.

1) Long positions are no longer relevant, since the price has broken the upward trend line and cannot overcome the 1.3744 level. However, if the price settles above this level, then beginners are advised to open long positions with targets at 1.3775 and 1.3820 and keep them open until the MACD indicator turns down.

2) Short positions are more relevant at the moment. However, the price cannot overcome the 1.3610 level in any way, so there is a high probability of returning to the 1.3744 level. We still recommend considering short positions, but you need the MACD indicator to discharge to zero and turn down. So far, the target is 1.3610. If the price settles below the 1.3610 level, it can also serve as a signal to sell with 1.3561 as the target.