In the first article, we figured out what awaits the euro/dollar pair in the new week and concluded that technical factors will be in the first place. Now it’s time to figure out what awaits the pound/dollar pair. We have repeatedly said that the GBP/USD pair is one of the most difficult and inconvenient pairs to trade at this time. One has only to look at the illustrations in this article to understand that this is indeed the case. In one illustration, a 4-hour timeframe and we see a “swing” on it. The price is constantly jumping from side to side without forming trends. The level of 1.3745 cannot be overcome for more than two weeks, which stops the formation of an upward trend. On the 24-hour timeframe, this upward trend is just visible and there are no “swings” on it. On the contrary, we see a clear trend on it, not strong, but almost recoilless. Well, as for the “foundation”, everything is difficult here. We have already drawn the attention of traders that the “foundation” is interpreted very ambiguously by the markets. Simply put, only in favor of the British currency. “Macroeconomics” is completely ignored. And it would be fine if there were no problems in the UK right now. If only its economy was recovering slowly. However, in practice, everything looks completely different. More and more experts agree that the British economy will contract in the first quarter of 2021 and the fourth quarter of 2020. Two “lockdowns” this winter can not pass without a trace. Accordingly, the US economy continues to recover, and the British economy is falling again. We remember the global factor of “stimulating the American economy”. However, there is not even a noticeable correction for the pound in recent months. All this complicates the process of analyzing and predicting the movement of the pair.

In the new week in the UK, there will be few fundamental events. Bank of England Governor Andrew Bailey will give a speech on Wednesday. A large package of macroeconomic statistics will be published on Friday. Reports on industrial production, GDP, and trade balance will be published. We believe that the GDP data may have an impact on the movement of the currency pair, however, the markets quite calmly ignored the GDP data in the Eurozone last week. Thus, the British GDP can also be ignored. But the speech of Andrew Bailey is much more important than the speeches of Christine Lagarde or Jerome Powell. If only because Bailey’s last speech after the Bank of England meeting caused a reaction, but the reaction is not entirely logical. We assume that the markets will again try to find positive notes in Bailey’s speech, and all the negative ones will be ignored. Or they will try their best to interpret everything that the head of the BA will say in favor of the British pound. On the 4-hour chart, most likely, the “swing” will continue.

We also draw the attention of traders to the fact that the pound sterling can collapse almost at any time. The fact is that the pound is very overbought, and the bulls have no strength for new purchases. Therefore, the pound is hanging around its 2.5-year highs and can not continue to move up. This is because buyers do not want to take profits on long positions yet. However, when they start doing this, the pound will almost inevitably fall. It is important not to miss this moment, or at least to be ready for it.

As for the common “foundation”, many experts remain skeptical and pessimistic about Britain’s break with the EU. There are a huge number of problems that the country and the government have already faced, as well as more to face in the next year or two. We have already talked about the “Scottish question” many times, but this is not the only problem of the Kingdom. Experts note epidemiological problems (Britain suffers from the “coronavirus” much more than many European countries), economic (“lockdowns”, losses associated with Brexit), labor (not all areas of activity and business are defined by the agreement with the European Union), social and so on. For example, it has become more difficult for many British manufacturers and households to sell their products to EU countries, despite the existing trade deal. The service sector is generally not affected by the trade deal, so a huge number of companies are left to their own devices. It is also noted that the government does not have a clear strategy on how to live outside the European Union. This, of course, is to blame for the pandemic, which emerged just as Britain and the EU were in the final stages of breaking up. Therefore, the British authorities were simply busy with other things instead of devoting all their time to developing a clear plan for life outside the alliance. There are also very weak prospects for Boris Johnson to conclude a trade agreement with the United States. After all, Johnson was promised a deal by his friend Donald Trump, who lost the election with a bang. But Joe Biden didn’t promise Johnson anything. Moreover, Biden was very unhappy with the actions of London, when it threatened to unilaterally violate some of the points of the Brexit agreement, which defined the order on the border between Northern Ireland and Ireland. Biden, who has Irish roots, loves the country of the Celts, so Johnson’s incomprehensible position upsets him.

And of course, the “Scottish question”, which is increasingly worrying London. Nicola Sturgeon and her party are unlikely to abandon the idea of leaving the United Kingdom and returning to the European Union. Now even the options of holding an independence referendum outside London’s control are being considered. After all, Johnson does not want to permit to hold it. Moreover, Johnson cut off any Scottish hopes of holding this referendum in a year, two or five years, saying that such events are generational events and can occur no more often than once every 50 or 100 years. But that’s hardly going to stop Edinburgh. And if the Scottish National Party consolidates its power following the May 6 parliamentary elections, the pressure on London will increase even more. 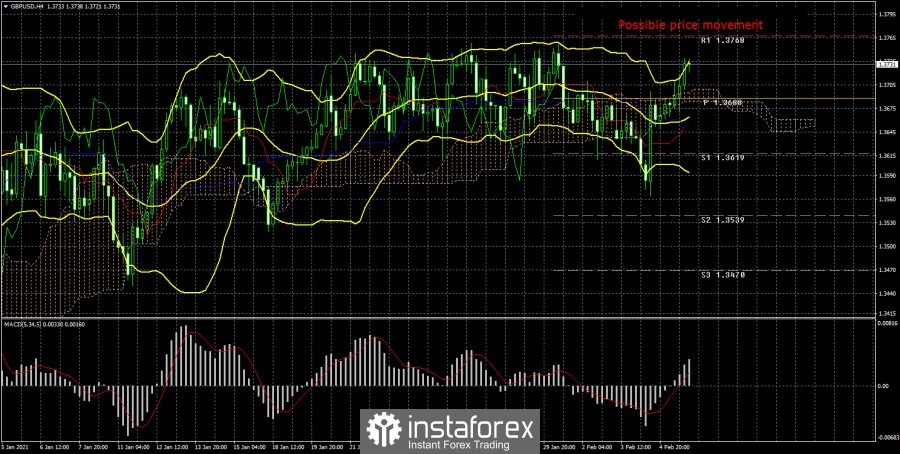 The pound/dollar pair continues to trade near its 2.5-year highs. At the same time, the 4-hour timeframe retains the “swing”, so you can not give the recommendation to trade for an increase or a decrease at this time. We recommend that if you trade the pair, then use the lower timeframe, where at least short-term trends are formed.