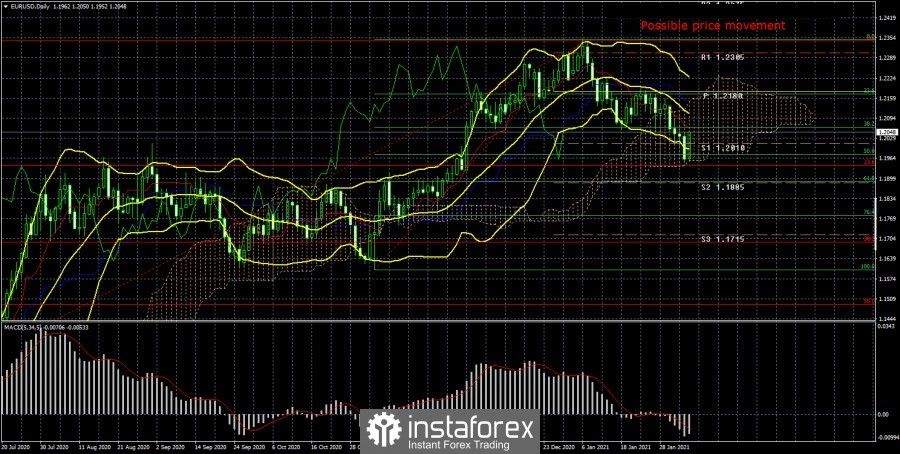 A new week begins and we can figure out what we can expect from it in terms of macroeconomics. We all witnessed how traders still worked out the macroeconomic statistics from America last Friday. We are talking about a relatively weak report on NonFarm Payrolls in the United States. Of course, there are also doubts here. There is no doubt that before this, the markets ignored the same Nonfarm Payrolls report and they ignored much more serious deviations and values of this indicator. On Friday, nonfarm came out worse than expected. At the same time, it should be answered that this is the first time in the last five or six months that Nonfarm has increased relative to the previous period. Other reports did not suggest a strong fall in the US currency at all. The unemployment rate did not change, and the changes in wages were not so strong that the dollar fell by 90 points. However, traders interpreted everything in their way. We believe that Nonfarm is not even the main reason for the fall of the US currency at the end of last week. The main reason is again technical, and several proofs can be given in favor of this. First, the fall of the US currency began early in the morning and lasted all day, and the US statistics came out in the afternoon. Secondly, after a fairly long fall (the last segment began on January 25), a correction was simply needed. Third, we have already said that according to the “global fundamental factors”, the US dollar is prone to fall in the long term, which means that its entire growth during January can be interpreted as a correction against a long-term upward trend. Therefore, this trend may resume, especially because the price has adjusted by 50% on the Fibonacci from the last three-month growth area of the pair. In general, it seems that nonfarm only slightly helped the dollar to fall, but did not cause it. As for the European statistics last week, and in general all statistics, it was ignored. What’s in store for us next week?

There is not much to say about the Eurozone. ECB Chief Christine Lagarde is scheduled to make two speeches, on Monday and Wednesday. Naturally, at the moment, it is impossible to say what the ECB president will talk about and whether she will even touch on monetary policy or the economy in her speeches. So, potentially, these events are not important. In the States, the situation will be more interesting. No major publications are scheduled for Monday and Tuesday. On Wednesday, the inflation rate for January will be known, however, there will be no major changes and the consumer price index will remain at the level of 1.4% in annual terms. In the evening of the same day, Federal Reserve Chairman Jerome Powell will give a speech. On Thursday, standard report on jobless claims. On Friday, nothing. Thus, we would say that traders will only be able to pay attention to the speeches of the ECB and Fed chairmen, as well as to the inflation report, throughout the next week. And then, Powell and Lagarde, most likely, will not tell the markets anything new and interesting, so these will be passing speeches. And US inflation should surprise, encourage, or disappoint market participants enough for a reaction to follow. We remind traders that most of the macroeconomic statistics continue to be ignored by the markets.

So it turns out that the new week will be passable in fundamental terms (and macroeconomically), and the main attention of traders should again be directed to technical factors. We remind you that the price bounced from the 50.0% Fibonacci level on the 24-hour timeframe and this is a strong enough signal for the resumption of a long-term upward trend. Of course, it is recommended to trade on lower timeframes and you need to form your trends. For example, on the 4-hour timeframe, the price has just crossed the Kijun-sen line. Consequently, even an upward trend has not even formed yet. In our forecasts of a new future fall in the US currency, which may have already begun, we rely on the fact that a new package of stimulus measures may be approved in the United States in the near future. This means that an additional $ 2 trillion or so will flow into the economy, which will affect the balance of supply and demand of the US currency. However, as we have already said, any hypothesis needs specific technical confirmation. If they are not present, then the hypothesis is not confirmed. Based on all of the above, the new week should show whether traders are ready for the resumption of a long upward trend for the euro/dollar pair. In theory, the pair should not be affected by any external factors, and it will move according to the laws of the market. Accordingly, if the mood of traders has already changed back to “bullish” or is just beginning to change, then this will become clear next week. Of course, the latest COT report is very confusing, which showed that the mood of major market players has become more “bearish” by 34 thousand contracts. Recall that COT reports also require specific confirmations from technical factors. 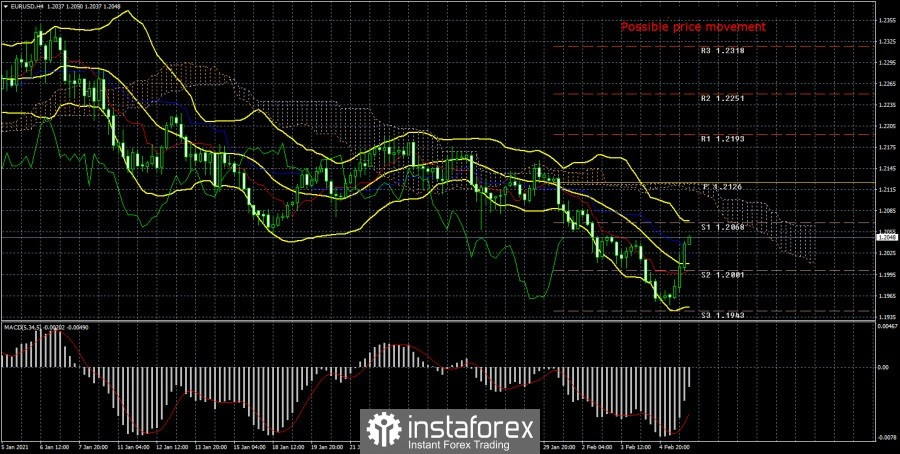 The technical picture of the EUR/USD pair shows that the pair on the 24-hour timeframe bounced off important supports in the face of the Senkou Span B line and the 50.0% Fibonacci level. Thus, a new round of upward movement is expected. And until the price fixes below the Senkou Span B line, this option will be the main one. Thus, on the 4-hour chart, it is now recommended to trade for an increase. Most likely, the movement will be progressive and a small pullback may follow on Monday. On such pullbacks and corrections, you can buy a currency pair if you use the Ichimoku trading system. The nearest target is the Senkou Span B line on the 4-hour chart, lying at the level of 1.2120.