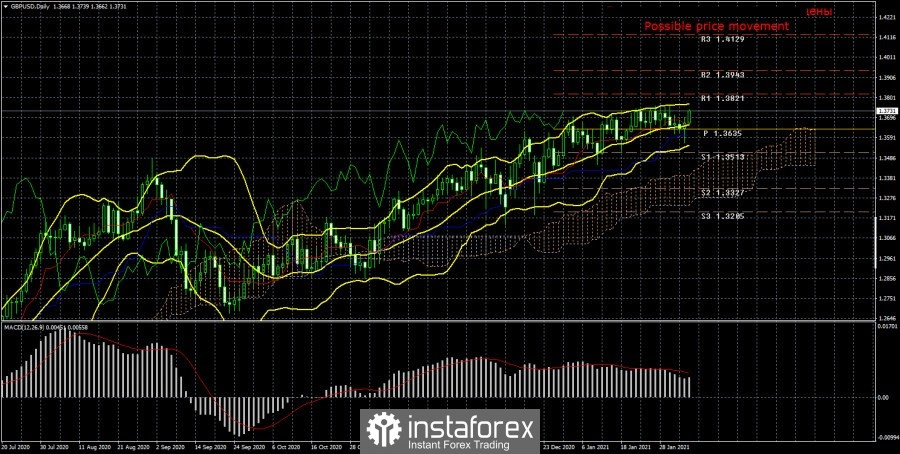 The GBP/USD currency pair has made pathetic attempts to start a downward movement in the long term during the current week. The price managed to fall to the critical Kijun-sen line, which was already located near the price. It was not possible to overcome this line, so the rebound from it signaled the resumption of the upward movement. The illustration clearly shows that the upward trend continues, but has been weakening recently. The amplitude of the pair’s movement decreases, corrections and pullbacks become smaller and smaller. The Bollinger bands have narrowed almost to a minimum. Thus, there are no new bulls on the market willing to buy the pound sterling. Therefore, for purely technical reasons, the upward movement loses its momentum and may soon end. However, given the “global factors”, the demand for the US dollar may fall again, which will lead to a new strengthening of the British pound. In general, the technical picture for the pound remains extremely ambiguous. On the 4-hour timeframe – “swing”, on the 24-hour – weak, recoilless upward movement. Thus, the pound/dollar pair remains one of the most unattractive pairs to trade at this time. And there is nothing to say about its prospects. 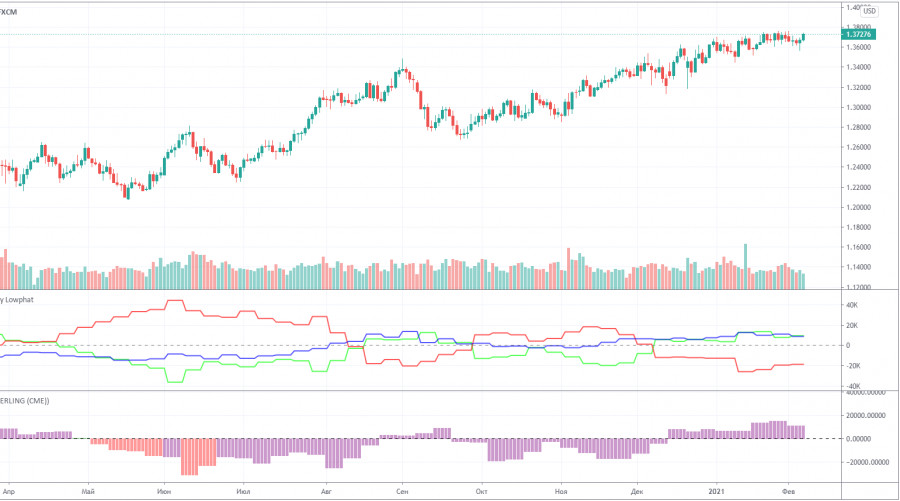 During the last reporting week (January 26-February 1), the GBP/USD pair fell by 20 points. Even though the price changes of recent weeks are almost zero, the upward trend continues to persist and is visible to the naked eye. Although the latest reports do not speak unequivocally about the growing interest of professional traders in the British currency, the growth of this currency persists. A paradoxical situation. Paradoxical and difficult to explain. The latest COT report showed that a group of “Non-commercial” traders opened 5.5 thousand buy contracts and almost 5.5 thousand sell contracts during the reporting week. Thus, the net position for this group of traders has not changed, and the mood of the major players has not changed. In principle, this conclusion coincides with the scale of price changes for the reporting week. As for the longer-term prospects, it is still impossible to draw a clear and logical conclusion. The total number of open buy contracts for professional traders is still higher than sell contracts, however, the advantage is not too large (55 thousand against 44 thousand). The indicators, which are designed to visualize changes in the mood of large traders, continue to show the absence of a single party line”. The mood of non-commercial traders is constantly changing, as indicated by the green line of the first indicator. The mood of commercial traders is also constantly changing, as indicated by the red line of the first indicator. And in technical terms, everything generally looks as if the pound will collapse tomorrow down by 500 points, however, the fundamental background contradicts this hypothesis. An extremely confusing situation.

It still doesn’t make much sense to talk about the fundamental background, especially for the pound/dollar pair. On Friday, the pair reacted to weak (but not disastrous) data from the US, however, a day earlier, it reacted inadequately to the results of the Bank of England meeting, and before that, for three days (and this is only this week), it ignored the macroeconomic background in principle. Moreover, how can we talk about the impact of “macroeconomics” or “fundamentals” on a pair that is growing steadily, despite the huge number of problems for the UK and its economy? Thus, the whole “foundation” is now very conditional. Much of the “macroeconomics” continues to be ignored. The pound sterling is already walking on the edge of the abyss. There are no new buyers, the currency is stuck around 1.3744 and has not been able to move further up for more than two weeks. But at the same time, the demand for it does not fall, so there is not even a downward correction. So now the question sounds like this: how long will buyers keep their long positions open? As soon as they start closing them, the pound is likely to crash down. The drop may be about the same as in September when the pair went down about 800 points in three weeks.

Trading plan for the week of February 8-12:

1) The price keeps the upward trend without any problems. Thus, on the 24-hour timeframe, the formal targets remain the resistance levels of 1.3821 and 1.3943. However, in recent weeks, there has also been a certain similarity of flat, so it is better to trade using lower timeframes, which can more quickly track changes in the mood of traders. It should also be remembered that the pound can collapse down at any time. It should also be remembered that without overcoming the level of 1.3744, the upward trend will not continue.

2) Sellers are still extremely weak, and the initiative in the market continues to be in the hands of buyers. Recently, the bears do not even have enough strength to form a correction. Thus, in the 24-hour timeframe, there is no question of trading for a decrease. On the hourly time frame, when forming a downward trend, you can consider trading on a decline, but very carefully. If the price is still fixed below the Kijun-sen line on the 24-hour timeframe, then it will be possible to consider short positions in small lots with a target of 1.3327.