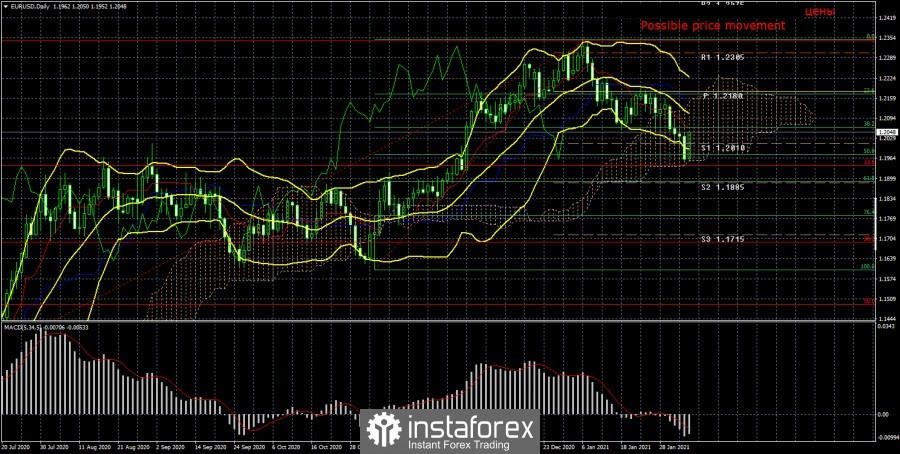 During the past week, the EUR/USD pair fell by 120 points, however, this is not the most important thing. The main thing is that the pair has worked out the level of 50% of the last growth area. Thus, at this time, we can safely say that the quotes have adjusted by 50% from the last growth and now, therefore, can resume the upward trend. We do not take into account the 10-month growth area yet, as it looks like it will continue. Also, a very important factor is the working out of the lower border of the Ichimoku cloud of the Senkou Span B line. The price just worked it out perfectly and bounced off it. Thus, we received several signals on the 24-hour timeframe about the possible resumption of the upward trend. As we have repeatedly said, at the moment, we are inclined to the option of continuing the long-term decline of the US dollar. Thus, from the current positions, the euro/dollar pair can rush, at least, to the Kijun-sen line, overcoming which will open the way to new highs. At the same time, if the bears manage to lower the pair below the Ichimoku cloud, then we can talk about the continuation of the downward movement and even the formation of a short-term downward trend. 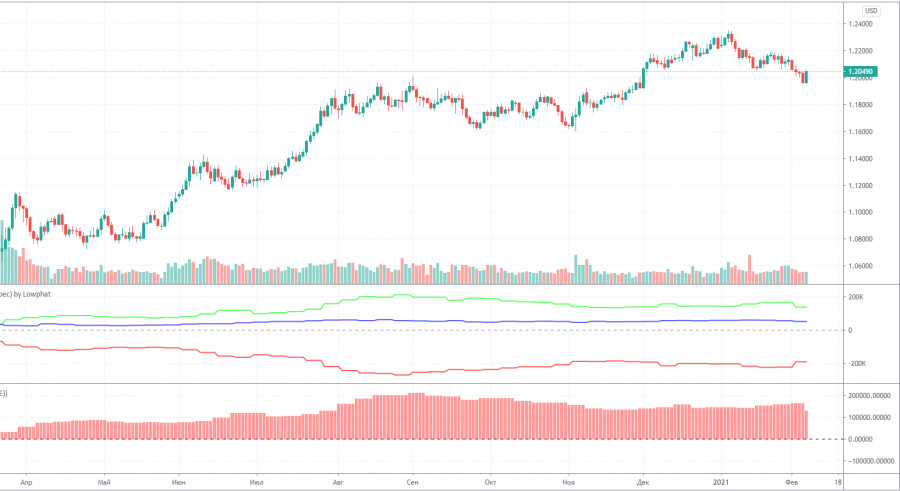 During the last reporting week(January 26-February 1), the EUR/USD pair fell by 80 points. Thus, it could be expected that professional players slightly lowered the demand for the euro currency, as the US dollar has been growing for 4 weeks in a row. However, the new COT report was a real surprise, which will now need to fit into the overall picture of things for the euro/dollar pair. During the reporting week, the most important group of Non-commercial traders opened almost 11 thousand sales contracts and closed 23 thousand purchase contracts. Given the fact that we have concluded that the upward trend is very likely to continue, this behavior of the major players does not fit with it at all. However, as we have already said, any assumption or hypothesis must be supported by technical factors and signals. So for now, these are just numbers. Figures that indicate a drop in the net position of non-commercial traders by 34 thousand at once. This means that their mood has become dramatically more “bearish”. But does this mean that the euro currency will continue to fall? Is the demand for the US dollar falling in parallel, which is not taken into account in the COT reports? We believe that this is exactly the case when the report data should be compared with the technical picture. For example, at this time on the 24-hour timeframe, there was a rebound from the Senkou Span B line and the 50.0% Fibonacci level. Thus, the chances of growth for the pair are high, and the COT report contradicts this, so we do not take it into account yet. But if the Senkou Span B line is overcome, then the data from the “technique” and COT reports will coincide and a new long-term downward trend can be expected.

This week was held under the flag of American statistics. During the week, several important macroeconomic reports were published in the euro area, however, traders still reacted to the US data. At the same time, there was no way to guess before the beginning of the current week which reports would arouse the interest of traders and which ones would not. The NonFarm Payrolls report has been ignored in recent months. Therefore, it may well have been the case that the last report would not have aroused any interest. However, it still caused it, even though it is impossible to conclude about its frank weakness. Yes, the actual value was lower than the forecast, but not much and still positive. Thus, as we have already said, in general, the growth of the European currency on Friday is logical. But why the equally important reports on GDP and inflation in the European Union were ignored at that time will remain a mystery. Thus, 90% of the macroeconomic background continues to be ignored by market participants and this should be taken into account. On Friday, no statistics were published in the European Union. In general, the advantage of “global factors” remains in favor of the euro currency. Therefore, from a fundamental and technical point of view, the European currency has an excellent chance of resuming growth.

Trading plan for the week of February 8-12:

1) The pair’s quotes continued their downward movement over the past week and only on Friday, bouncing off the Senkou Span B line and the 50.0% Fibonacci level of 1.1975, began to move up. Thus, we would recommend at this time to buy the pair in small lots in the expectation of the formation of a new upward trend. In the future, you can buy more when you receive confirmation of the beginning of a new upward trend. The nearest target on the 24-hour timeframe is 1.2147 (Kijun-sen), which almost coincides with the Senkou Span B line (1.2120) on the 4-hour timeframe. This area is 1.2120-1.2147 and is now the target area.

2) The downward trend will now have a chance to resume only if the bears manage to overcome the Senkou Span B line on the 24-hour timeframe. If this happens, we will recommend new sales with targets of support levels of 1.1885 and 1.1778. Much will depend on “global fundamentals”.