Quite a lot of signals to enter the market appeared yesterday. Let’s take a look at the 5-minute chart and break them down. You can clearly see how the bears are trying to surpass support at 1.3612 and so it was tested from the bottom up, which then created a signal to open short positions in the pound. To be fair, that one point was not enough before this level was tested, so whoever ignored this entry point and expected a clearer signal did everything right. Then the pound was bought on the rebound from support at 1.3575. An upward correction took place when this level was initially tested, which brought the expected 25 points of profit.

Everything is exactly as I predicted. Those who did not leave the market could get a fat profit, since the pound jumped after the Bank of England meeting. This happened after the central bank announced that the topic with negative interest rates was not “close”. In the afternoon, I paid attention to the 1.3632 level and advised you to open long positions from it after a breakout and consolidation at this range. And so it happened. This level was tested from top to bottom and created a good entry point for long positions, afterwards the pair grew by around 45 more points and stopped at the resistance area of 1.3679. After returning below this level by the end of the US session, the bears achieved a slight downward correction by 2-0 points. 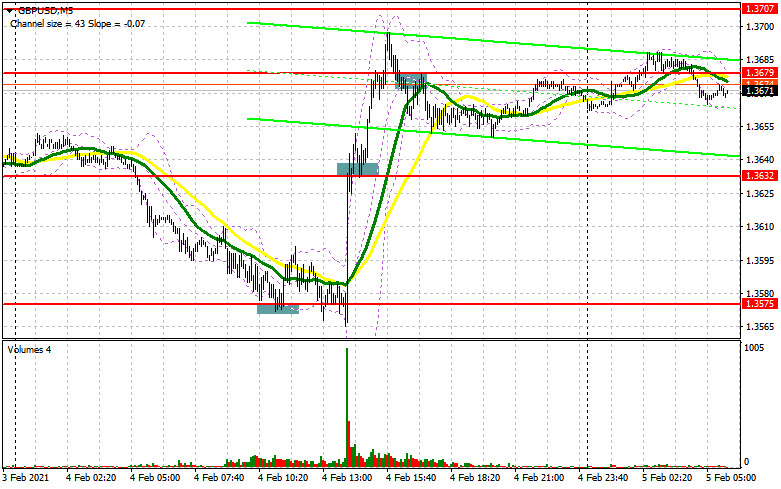 Like yesterday, the buyers’ initial target will be resistance at 1.3688. A breakout and consolidation above this level along with being able to test it from top to bottom creates an excellent buy signal in sustaining the bull market. In this case, you can count on an update of the new high around 1.3723, where I recommend taking profits. The succeeding target will be the annual high of 1.3755, which will be possible only after Bank of England Governor Andrew Bailey’s speech, provided that he does not raise the issue of negative interest rates again. A more optimal scenario for opening long positions would be a downward correction to the support area of 1.3641, where the moving averages pass, playing on the side of the pound buyers. You can buy GBP/USD from this level immediately on a rebound, at least counting on an upward correction of 20-25 points within the day. A larger support level is seen around 1.3605.

Once again, the bears will form a false breakout in the resistance area of 1.3688. Such a scenario will lead to a downward correction to the support area of 1.3641, where I recommend taking profit. The pound might be under pressure if Bailey raises the topic of negative interest rates, leaving the possibility of their introduction in the future if necessary. In this case, the pound might settle below 1.3641. Testing this level from the bottom up creates a good signal to sell the pound in order to update support at 1.3605. If GBP/USD does not rapidly move down after a false breakout forms in the resistance area of 1.3688, then it is best not to rush to sell, but wait for a new wave of growth and an update of the 1.3723 high, from which you can open short positions immediately on a rebound, counting on a downward correction at 20 -25 points within the day. The next major resistance is seen around 1.3755. 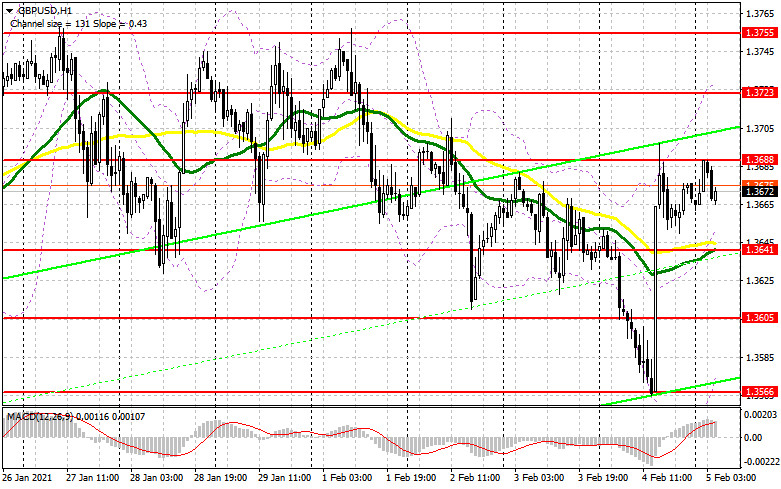 Trading is conducted above 30 and 50 moving averages, which indicates a succeeding recovery in the pair.