Several signals to enter the market appeared yesterday. Let’s take a look at the 5-minute chart and break down the entry points. We can see that nothing sensible happened at the 1.2005 level. We also couldn’t wait for a normal false breakout and the quote to return to 1.2005. The pair was under pressure after the release of weak statistics on the volume of retail sales in the eurozone. The fact that the price settled at the 1.2005 level and it was tested from the bottom up had created a good entry point for short positions. Subsequently, the bears managed to update the low of 1.1965, where I recommended taking profits. To be fair, it was quite difficult to wait for this level to be tested, since there were problems with the euro’s fall in the support area of 1.1985 during the first half of the day. Buying on the rebound from the support at 1.1965 resulted in a slight upward correction by 13 points, and afterwards the euro was under pressure again. 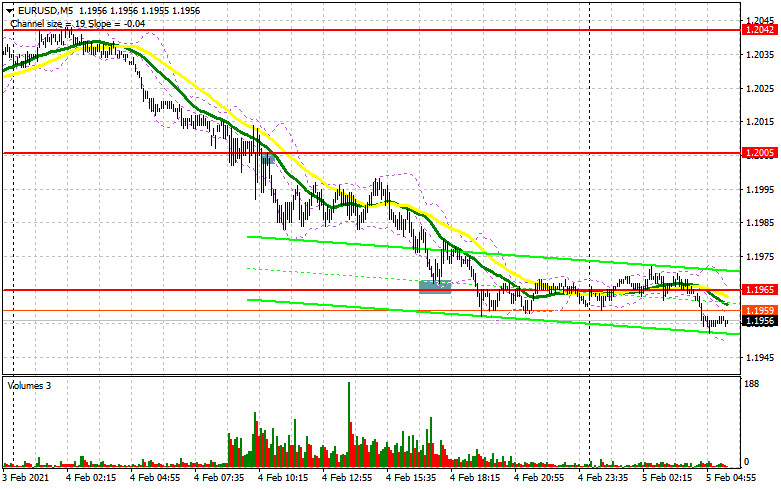 Nothing interesting for the European economy this morning, so the euro will be under pressure until the US labor market report is released, which will set the direction of the market at the end of the week. Data on changes in the volume of orders in the German industry and changes in the number of people employed in the private sector of the French economy may garner attention. Buyers of the euro need to focus on protecting a new support at 1.1952, on which the succeeding upward correction of EUR/USD depends. The lower border of the descending channel is below this level, the breakdown of which will only increase the pressure on the pair. A good fundamental report on the eurozone, indicating an improvement in the economic situation, will allow a false breakout to form in the support area of 1.1952, which will then create a good entry point into long positions. If buyers are not active at this level, I recommend postponing long positions until the test of the next low of 1.1921, from where you can buy the euro immediately on a rebound, counting on an upward correction by 15-20 points. A larger support can be seen in the 1.1885 area, from which the euro can also be bought on a rebound. An equally important task is to return to resistance at 1.1997, where the moving averages pass, playing on the side of the sellers. A breakout and consolidation above this level, along with a disappointing report on the US economy, creates a good signal to buy the euro in order to return to the high of 1.2042, where I recommend taking profit. The next target will be the 1.2084 area.

Selling at current lows can be dangerous. Therefore, I recommend opening short positions only after an upward correction to the resistance area of 1.1997, which is where the moving averages are. Forming a false breakout in this area creates a signal to sell the euro in order to sustain the current bear market. Weak data on the eurozone will certainly allow the bears to return EUR/USD to the support area of 1.1952, as the pair’s succeeding direction depends on whether the quote will go beyond it or not. A breakout and being able to test this level from the bottom up will create a new entry point for short positions in order to sustain the downward trend, which will pull down EUR/USD to a new annual low in the 1.1921 area, where I recommend taking profit. The succeeding target will be support at 1.1885. If we observe an upward correction of the euro in the first half of the day, and the bears are not active in the resistance of 1.1997, then it is best to postpone short positions until the 1.2042 high has been tested, from where you can sell EUR/USD immediately on a rebound for the purpose of pulling it down by 15- 20 points within the day. 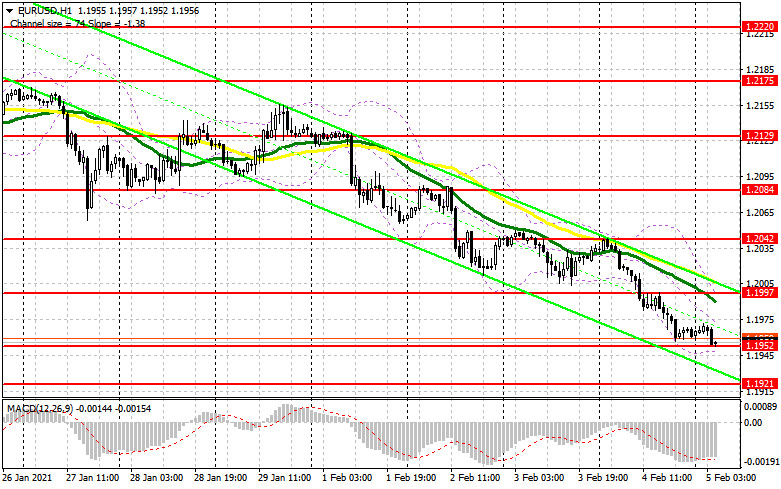 The Commitment of Traders (COT) report for January 26 recorded a sharp increase in long positions and a reduction in short ones. The incoming data is limiting the euro’s upward potential, as is the fact that vaccinations in the euro area will proceed at a slower pace than expected. This will certainly affect the GDP for the first quarter of 2021, but it is unlikely to be able to seriously affect the medium-term prospects for the EUR/USD recovery. With each significant downward correction in the pair, the demand for the euro returns, and the lower the rate, the more attractive it will become for investors. The prospect of canceling quarantine will clearly keep the market upbeat in the future. However, the risk of extending quarantine measures in February is still a restraining factor for euro growth. The COT report indicated that long non-commercial positions rose from 236,533 to 238,099, while short non-commercial positions fell from 73,067 to 72,755. Due to continued growth in long positions, the total non-commercial net position rose to 165,344 against 163,466 a week earlier.

Trading is carried out below 30 and 50 moving averages, which indicates the pressure on the euro.