EUR/GBP is trading lower at 0.8744 level versus 0.8838 yesterday’s high. The Pound has taken full control around the BoE monetary policy meeting. As you already know, the Bank of England maintained its Official Bank Rate unchanged at 0.10%, the MPC members have voted unanimously for this decision. Moreover, the Asset Purchase Facility remains steady at 895B.

The pair plunged as the Euro was weakened by the Euro-zone retail sales lower increase of 2% versus 2.4% expected. Unfortunately, the German Factory Orders dropped unexpectedly by 1.9% more versus 1.2% estimated bringing more pressure on EUR/GBP. 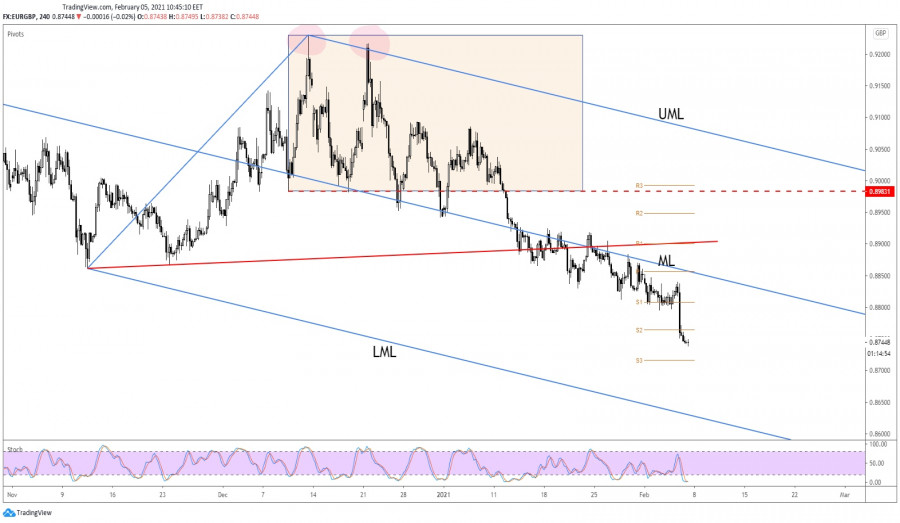 Taking a look at the H4 chart you’ll notice that the pair has dropped and stabilized under the median line (ML) of the descending pitchfork indicating a larger drop ahead. The price has tested and retested the S1 (0.8807) level and it was poised to return to the median line (ML), but yesterday’s aggressive sell-off signals that the downside movement is far from being complete.

Now is traded under the S2 (0.8764) broken static support. Even if the selling pressure is high, EUR/GBP could try to recover a little after yesterday’s bearish momentum. A temporary rebound could help us to catch a new downside movement.

Technically, the price is expected to drop to the S3 (0.8716), 0.87, or lower towards the lower median line (LML) of the descending pitchfork.

The descending pitchfork’s lower median line (LML) could attract the price in the coming weeks despite any temporary rebound. Testing and retesting the S2 (0.8764), or a false breakout with great separation above this static resistance followed by a strong drop brings a selling opportunity.

EUR/GBP’s failure to retest the median line (ML) signaled a selling pressure, so the current drop was imminent.