The interaction of people in social networks has created a new successful concept of building a business – a personal brand. Communication with the services takes place not only through advertising, but also through conditional communication with the creator of the brand, its main beneficiary. Most of all, the genius, billionaire, playboy, philanthropist, and Iron Man of our time – Elon Musk – succeeded in this.

The owner of Tesla and SpaceX has repeatedly shown the greatness of his power, raising the shares of different companies in one social media post. The most recent example is the “pump” of GameStop shares, which began to rise in price with double force after Elon Musk’s tweet. The billionaire did not stop and today, February 4, posted on Twitter a picture of the Falcon 9 rocket taking off and added the caption “Doge.” Just 50 minutes later, the value of Dogecoin soared by 47%.

Thanks to Musk’s Twitter account, the altcoin set a local high, stopping at $0.059. We see another juggling of the financial markets performed by the owner of Tesla and SpaceX. This was already observed a week ago, when Elon posted on Twitter about the rising price of bitcoin. As a result, the position of the first cryptocurrency has strengthened and increased in price by 15%. 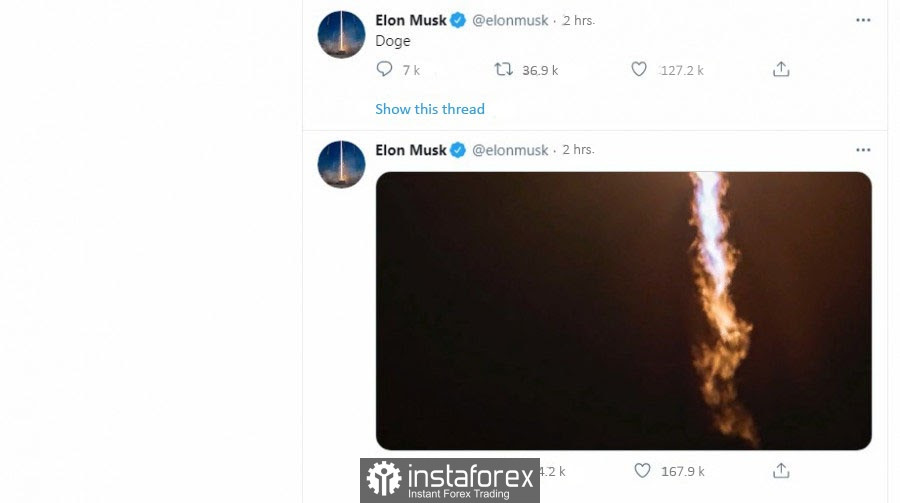 The posts of media and influential people on Twitter, the well-coordinated work of Reddit traders show how much influence social networks continue to receive. Such actions already cause loud resonances in the financial markets and may soon become the strongest tools for influencing the value of certain assets and become opponents of large manipulative investors. Given the digital nature of cryptocurrencies as an instrument of the financial market and its dependence on such shares may have a defining character.

We should not forget the news that the Visa payment system is preparing software for the interaction of bank customers and cryptocurrencies. This can increase the capabilities of the community and its individual personalities, and can influence the processes of the cryptocurrency market. Most likely, such changes are inevitable, and they can turn out to be a manipulative tool for some, and a completely unpleasant surprise for other participants in the cryptocurrency market.