Yesterday’s trading on the main currency pair of the Forex market was similar to the previous one, that is, uneven and nervous. It is possible that such market sentiment was influenced by the situation with vaccination of Europeans, which is significantly behind the initial calculations. As of last night, about two million people have been vaccinated in the euro area countries. For example, in the UK, where the population is much smaller, this figure already reaches six million. Now, regarding yesterday’s statistics and what data market participants expect today. The main macroeconomic reports from the eurozone yesterday were consumer price indices, which indicate the degree of inflationary pressure in the region. I should immediately note that the data on consumer prices came out quite ambiguous. If every month, the indicator was weaker than the previous indicator of 0.3% and amounted to 0.2%, then in annual terms, as well as the base value of the index exceeded the expectations of experts.

As for the American statistics, the change in the number of employees from ADP was significantly better than the previous indicator of minus 123 thousand and showed an increase of 174 thousand. The difference, as you know, is very significant. If we take into account that ADP data is often a leading indicator of Nonfarm Payrolls, then on Friday, we can expect very positive reports from the US Department of Employment. However, there is still time until Friday, and today all the attention of investors will be focused on data on retail sales in the euro area, as well as on US reports on initial applications for unemployment benefits and production orders. The release time, as well as forecasts for this and other current data, can be seen in the economic calendar. 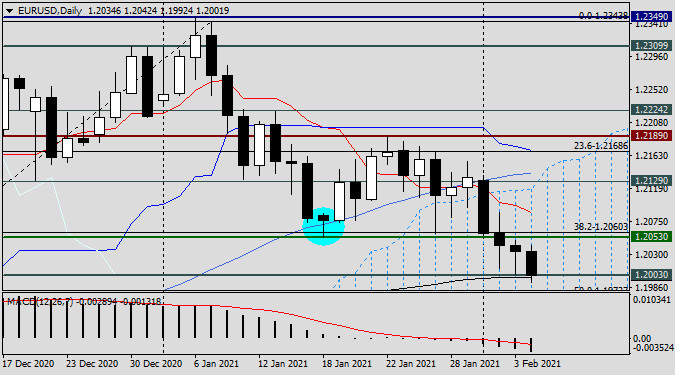 At yesterday’s trading, the euro bears continued to put pressure on the quote, however, having reached the area where the black 89 exponential moving average passes (this is near 1.2000), the pair found strong support and quite predictably began to recover the losses incurred before. As a result, yesterday’s candle formed with a long lower shadow (or tail) and a small bearish body, and the closing price on February 3 was 1.2034. Thus, two consecutive daily candles closed below the important support zone of 1.2060-1.2050. If today’s candle closes at 1.2050, then the breakdown of this strong price zone, which for a long time kept the pair from moving in the south direction, can be considered broken.

On the other hand, Friday’s data on the US labor market may turn everything upside down and radically change the technical picture for the main currency pair. However, something suggests that the weakening of the US dollar across a wide range of the market is complete and now the US currency has changed the trend and will strengthen. Conclusions about this can be made only after Friday’s closing of daily and weekly trading. Now, at the moment of writing, the bears for EUR/USD are not calming down and continue to put quite aggressive pressure on the quote. The pair has again dropped to 89 EMA and is re-testing this strong moving trend for a breakdown. 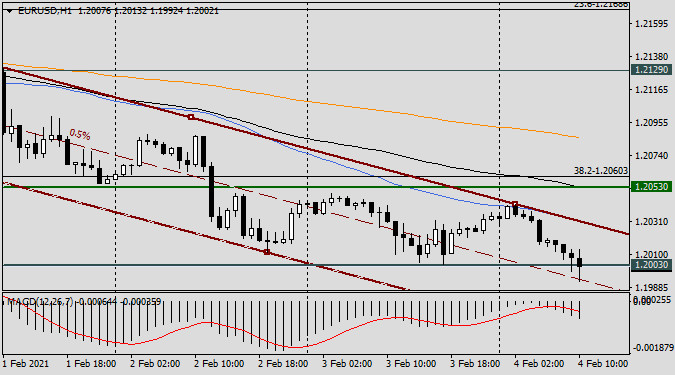 On the hourly chart, the euro/dollar pair is trading in a descending channel and is trying to fall below the average dotted line of this channel. At the same time, the downside players are trying to rewrite yesterday’s lows, shown on 1.2003, and lower the rate below the most important psychological level of 1.2000. I’ll assume that they can do it. However, the mark of 1.2000 is precisely psychological, and not a strong technical one. According to long-term observation, the level of 1.2000 very rarely had an impact on the price and turned it in the opposite direction. Bounces or reversals occurred from 1.2060, 1.2050, 1.2030, 1.2011, 1.1980, 1.1960 , 1.1940. You can list it further, however, it is from 1.2000 that the pair very rarely radically changed its price direction. Despite the above-mentioned factors, this does not mean that the level of 1.2000 should be ignored, it is just better to open positions above or below this mark.

Given the current ambiguous situation and the upcoming release of tomorrow’s labor reports from the United States, I recommend considering positioning in both directions, while giving priority to the pair’s sales. So, to open short positions at more favorable prices, you can look closely after the short-term rise of the pair in the price area of 1.2030-1.2055. In turn, those who want to buy EUR/USD can do so from the price zone of 1.2000-1.1975. At the same time, in both cases, it would be nice to enlist the support of the corresponding candle signals on this or four-hour charts.