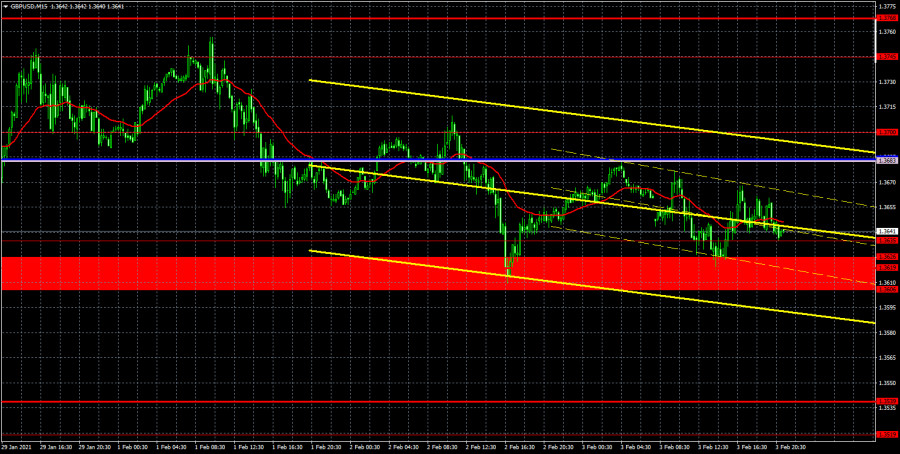 Both linear regression channels are still pointing down on the 15-minute timeframe. Thus, we conclude that the downward movement prevails in the market in the short-term. However, the 1.3606-1.3626 area is of greatest importance now. The pair will remain inside the horizontal channel until the bears manage to overcome this area. 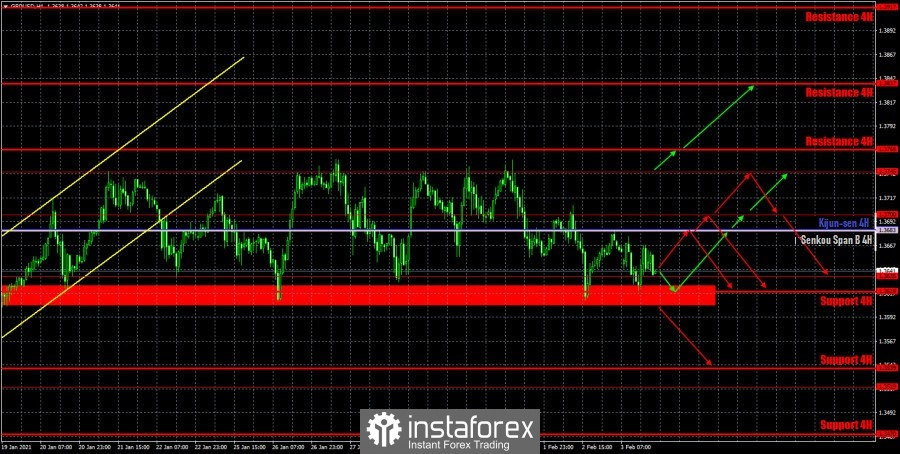 The GBP/USD pair reached the support area of 1.3606-1.3626 once again, from which it rebounded and provoked a new round of upward movement. Thus, the pound/dollar pair remains within the horizontal channel, limited by the levels of 1.3620 and 1.3745. The pound is still trading according to its own rules and does not react to either macroeconomic statistics or fundamental background. There is a hope that today market participants will no longer be able to ignore the Bank of England meeting and the speech of Andrew Bailey, but there is no certainty about that. Therefore, technical factors remain in first place. In the last review for the pound, we recommended trading bullish if the price rebounds from the 1.3606-1.3626 area with targets at 1.3700 and 1.3745. The rebound happened, but the targets were not reached. Thus, traders could leave this trade either at a minimal and insignificant profit, or at zero. We recommended trading bearish in case the price rebounds from one of these levels: 1.3700 and 1.3745. However, no such signal was generated over the past day. Thus, at the moment, all that remains is to continue trading within the horizontal channel or wait for the price to leave it. 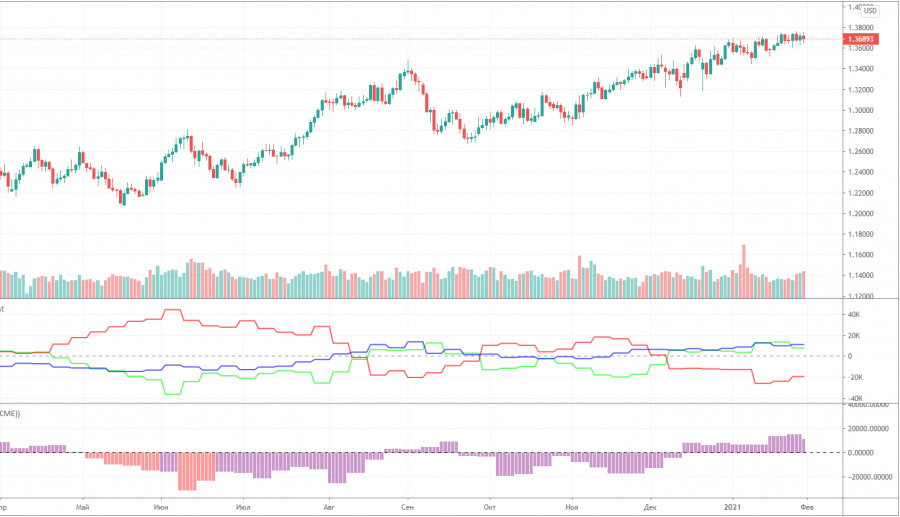 The GBP/USD pair rose by 80 points during the last reporting week (January 19-25). It doesn’t seem like a lot, but the growth is stable. But the latest Commitment of Traders (COT) report was disappointing again. Recall that over the past two to three months, the vast majority of reports indicated minimal changes. At the same time, it cannot be said that the mood of large traders has been stable all this time. The green and red lines of the first indicator, which graphically reflect the change in the net positions of the “non-commercial” and “commercial” groups, clearly indicate frequent changes in mood. These lines are constantly changing their direction of movement, which means that the big players themselves do not know what to do with the pound now. We also said earlier that the issue is not only about the demand for the pound, but also the demand for the dollar, which the COT report does not reflect. If, in theory, the demand for the pound falls, but the demand for the dollar falls, then this does not cause the pound to fall. We have seen approximately the same picture in recent months. Professional traders are rushing from side to side, and their mood cannot be called stable bullish, however, the pound is growing steadily and has grown by 10 cents only in the last 3-4 months. During the reporting week, commercial traders opened 2,500 new buy contracts (longs) and 6,500 sell contracts (shorts). Therefore, their net position decreased by 4,000, and the mood of non-commercial traders became more bearish. However, this still has no effect on the pound.

Wednesday was boring. Volatility was low, and trading signals were at a minimum. The UK released a report on business activity in the services sector, which slightly rose, but still remained not even below the 50.0 level, but below the 40.0 level. However, the pound was not particularly upset about this. Just as the US dollar did not cheer up when the ISM report on business activity in the US was published, which exceeded forecasts and reached 58.7. Perhaps the markets had a minimal reaction, 20 points, but we are not interested in a 20 point move…

The UK will host the key event of the week – the announcement of the results of the Bank of England meeting. As we have already mentioned in the fundamental articles, the balance of power in the voting among the members of the monetary committee to change the key rate, as well as the speech of BoE Governor Andrew Bailey, will be of key importance. Bailey’s rhetoric can garner interest, because market participants will seek to find at least some hints of a possible decrease in the key rate to the negative area. If found, the pound may finally start a tangible downward movement, if not, the pound may return to 2.5-year highs.

We have two trading ideas for February 4: