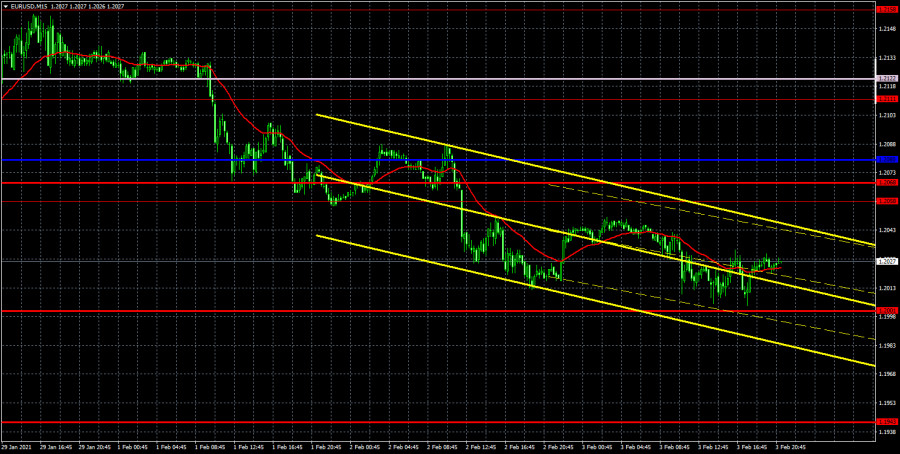 Both linear regression channels are directed to the downside on the 15-minute timeframe, which eloquently signals a downward trend in the short term. The sell signal, formed on Tuesday, did not require any clarification on the lower timeframe. There are no new signals at the moment. 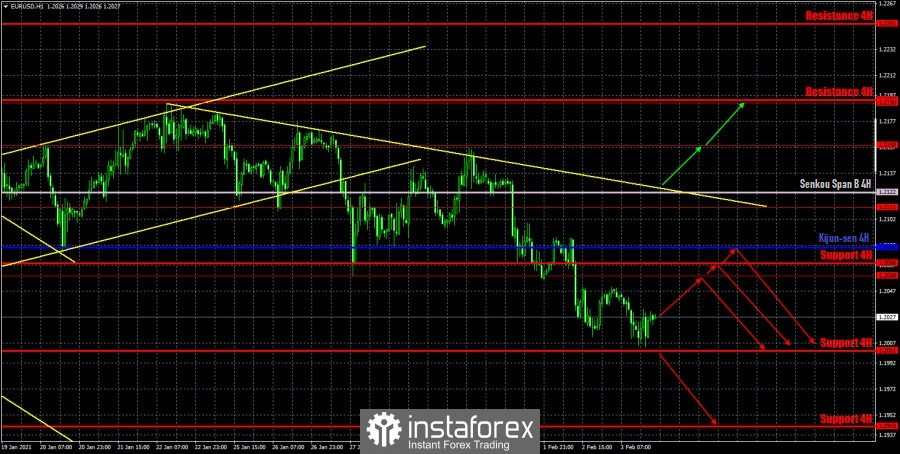 After a marginal correction, the euro/dollar pair resumed its downward movement on the hourly timeframe on February 3. Thus, the downward trend persists, and it is recommended to trade mainly for a fall, since the downtrend line is also preserved. The price is far enough from it. By the end of the day, the pair had reached the target level of 1.2001. Thus, traders who opened short positions a day ago still made a profit on them. Take note that in the previous reviews, we have advised you to trade down with 1.2001 as the target. According to our recommendations, traders should not open new short positions, since there was no rebound from the Kijun-sen line or from the levels 1.2058 and 1.2068. Long positions are irrelevant at the moment. We recommended long positions only if the price settles above the trend line, which, of course, did not happen over the past day. Thus, the trading strategy has not changed yet. Therefore, the priority is to sell the pair on Thursday. 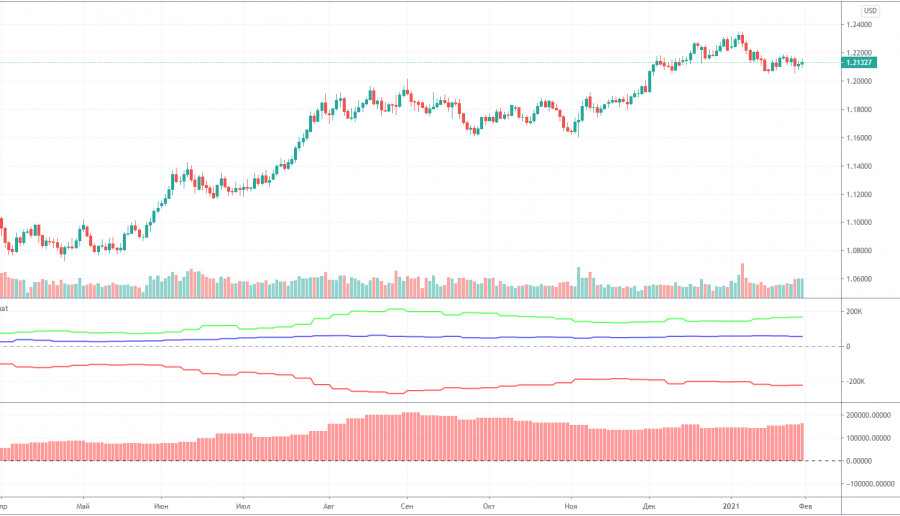 The EUR/USD pair rose by 60 points during the last reporting week (January 19-25). Thus, in the long term, an unambiguous conclusion is made: the upward trend persists and can resume at any time. The Commitment of Traders (COT) reports, which shows the sentiment of major market players, could indicate a decline in interest in the euro. However, they do not testify to this. On the contrary, the penultimate COT report showed a sharp increase in bullish sentiment among the non-commercial group. They opened as many as 8,000 new buy contracts (longs). The latest COT report, which just came out, did not show crucial changes, but it did show a bullish mood again. This time, non-commercial traders opened 3,300 buy contracts (longs) and closed 1,200 sell contracts (shorts). Thus, the net position for professional traders has grown again, by 4,500. Not too much, but not too little. And most importantly, such figures do not allow us to conclude that the upward trend is over. Of course, this does not mean that until major players begin to reduce the number of Buy-contracts, the euro will not fall. But if we evaluate only the COT report, then we can not make a conclusion about the end of the upward trend.

The European Union published an index of business activity in the service sector. This indicator surprisingly increased compared to December and had reached 45.4 points. However, this value is still below the 50.0 level, below which the sector is considered to be contracting. Also, the EU published its inflation report, which sharply jumped to 0.9% in annual terms from the previous -0.3%. This is a huge growth, but again, it did not help the euro. Market participants continue to ignore most of the macroeconomic statistics. There is no other way to explain the lack of reaction to the inflation report. It would be understandable if the real and predicted values were almost the same. In such cases, there is usually no reaction either. But 0.9% y/y is a complete surprise. Thus, we are still leaning towards the version that the pair’s movements were influenced by two global factors, which we have already mentioned several times – “the balance of power between the EU and US economies” and “a new stimulus package for the American economy.”

The European Union is set to release its retail sales report, but it’s partly obvious that traders will not react to this report either. The United States will also release a report on applications for unemployment benefits, and if their number does not grow above 1 million, then, most likely, this report will not have an impact on the pair’s movement. Thus, technical factors remain in the first place, and so you should pay attention to them when opening any positions.

We have two trading ideas for February 4:

1) Buyers still do not have the initiative as the price continues to be below the downward trend line. Thus, we recommend buying the pair if the price settles above the downward trend line with targets at the resistance levels of 1.2158 and 1.2190. Take Profit in these cases can be up to 60 points. However, now there are no prerequisites for changing the trend.

2) Bears continue to hold the initiative and pull down the pair. Therefore, we continue to recommend trading bearish while aiming for the support level of 1.1943, if the price settles below the 1.2001 level. Take Profit in this case can be up to 50 points. You can also open short positions while aiming for 1.2001, if the price rebounds from the Kijun-sen line (1.2080) or the 1.2058-1.2068 area.

Correction In Copper Or Another Buying Opportunity?

Dow up 200 points. Nasdaq extends back above its 100 day moving average

European shares end lower on the day but close higher this week.