Litecoin (LTC/USD) is trading lower at 148.33 level versus 158.99 today’s high. Still, this could be only a temporary drop before the rate jumps way higher. Technically, it has turned to the downside to test and retest some former resistance levels.

Technically, the price was into a short-term correction which has ended after the price’s failure to approach and reach the 111.04 lower low. It has moved sideways on the H4 chart developing a triangle pattern. Now the rate has escaped from this continuation pattern suggesting that the major uptrend should resume. 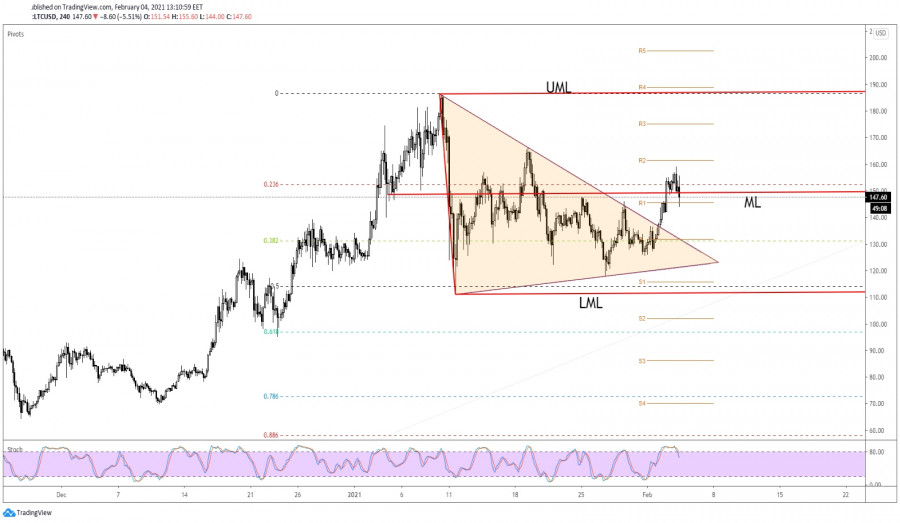 So, LTC/USD increased as much as 158.99 and now it has slipped lower to retest the R1 (145.55) and the median line (ML). The price has registered an aggressive breakout through these levels, so the current retreat could be natural.

Stabilizing above the median line (ML) and beyond the 23.6% Fibonacci level indicates a potential upside movement towards the 186.00 historical high. Actually, further growth will be activated and validated by a new higher high, jump above 158.99 today’s high, and if it closes above the R2 (161.40).

From the technical point of view, LTC/USD could resume its current bearish momentum if it stabilizes under the median line (ML) and if it closes below the R1 (145.55).