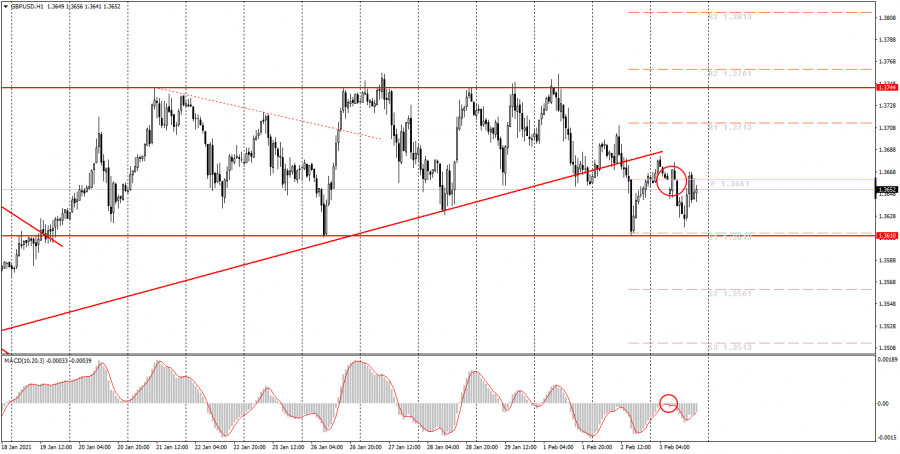 The GBP/USD pair traded in different directions all day. On higher timeframes, we call it a “swing” movement: when the price is constantly jumping from side to side, but at the same time it can keep the trend. Such movements are extremely inconvenient to work out, since the indicators constantly react to them with reversals. This is exactly what happened today. Not only that, the pound/dollar pair passed only 60 points for the whole day, which is very little, since there was also a gap in the middle of the day. This is an absolutely unprecedented phenomenon, absolutely not typical for the foreign exchange market. The “gap” is the gap between quotes. This is normal in a stock market that does not operate 24/7. Gaps connect trading sessions. In the foreign exchange market, the gap can only be seen between Friday and Monday. But not in the middle of a working day! Today we saw this. A sell signal was also formed during the day, but thanks to the same gap and swing, it turned out to be false and led to losses. Thank God it was small, no more than 10 points. Therefore, it is not the most favorable day for trading, but it could be worse. In general, there is no trend now. The pair continues to trade between the 1.3610 and 1.3744 levels. So now we have a flat. It is always inconvenient to trade in a flat, so beginners can stay outside the market for some time and wait for a new trend to form.

The UK Services PMI was released on Wednesday, which remained extremely low and was not interesting. And in America, in addition to the ISM index, which we talked about in the euro/dollar article, the ADP also released an important report regarding the change in the number of employees in the US private sector. It is considered to be quite important and its value significantly exceeded forecasts. +174,000 workers instead of the predicted +47,000. But both of the most important pairs ignored it too.

The UK will host the main event of this week and possibly this year (for the pound). The Bank of England meeting, during which the markets will try to understand whether the central bank intends to reduce the key rate in the negative area in the coming months. If such hints are received or the Governor of the Bank of England, Andrew Bailey, directly states this, then the pound may finally surpass the 1.3610 level and continue to fall. Otherwise, the pair’s quotes are likely to remain in a horizontal channel.

1) Long positions are no longer relevant, since the price has broken the upward trend line. So now you need to wait for the upward trend to resume in order to be able to trade bullish again. The most interesting thing is that there is no downward movement right now either. By and large, the pound/dollar pair is flat.

2) Short positions are more relevant at the moment. However, the price cannot overcome the 1.3610 level in any way, so there is a high probability of returning to the 1.3744 level. We still recommend considering short positions, but you need the MACD indicator to discharge to zero and turn down. So far, the target is 1.3610. If the price settles below the 1.3610 level, it can also serve as a signal to sell with 1.3561 as the target.