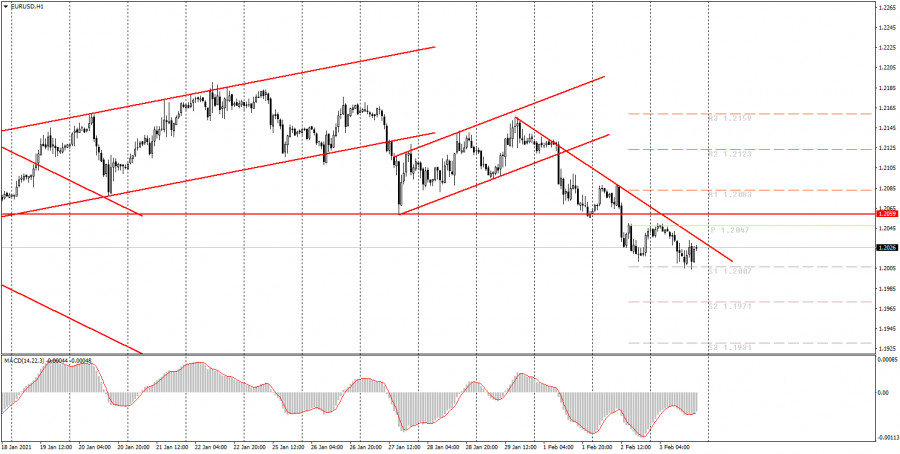 The EUR/USD pair corrected minimally to the support area of 1.2047 and resumed the downward movement on Wednesday, having reached the support level of 1.2007 by the end of the day. As you might guess, from the high to the low of the day, the pair passed around 40 points, which is very little even for it. Not a single trading signal was generated during the day. The MACD indicator turned down, however, it did not discharge to the zero level beforehand. The trend line remained in effect, but the price did not retrace it and did not bounce off it. Thus, following yesterday’s recommendations, novice traders should not have opened either short or long positions today. In general, the downward trend remains in effect, however, the price is located very close to the trend line, therefore, it may settle above it by Thursday, which will change the current trend to an upward one. In this case, beginners can consider long positions. Rebounding from the trend line can provoke another round of the downward trend.

The macroeconomic background was very, very interesting on Wednesday. The European Union published a report on business activity in the service sector for January, but since it did not change much compared to December, there was no reaction to it. But the inflation report for January unexpectedly turned out to be much stronger than forecasted and amounted to + 0.9% y/y, although the previous value was -0.3%. However, the euro was unable to extract any dividends for itself from this report. An important index of business activity in the US service sector ISM was also published, which also exceeded the forecasted values, but traders did not pay much attention to it. Thus, we conclude that traders are simply ignoring macroeconomic publications again, so technical factors remain in the first place in terms of importance.

Only minor reports will be published in the European Union and the United States on Thursday. And if today the markets ignored important data, then there is no hope that they will pay attention to tomorrow’s report on retail sales in Europe or the number of new claims for unemployment benefits in the United States. Most likely, this data will also be ignored. Thus, everything will depend on the trend line and technical factors in general. This somewhat facilitates the process of trading the EUR/USD pair.

1) Long positions are currently irrelevant, since the price is below the trend line. Thus, you are advised to consider new long positions on the pair if the price settles above the downward trend line with targets at resistance levels 1.2083 and 1.2123.

2) Trading for a fall remains relevant at the moment. However, we recommend trading bearish only after the next round of correction, the MACD indicator is discharged to zero and a new and strong sell signal is formed. Or if the price bounces off the trend line. The targets are 1.2007 and 1.1971.