The news that the former president of the European Central Bank, Mario Draghi, was entrusted with the rescue of Italy, affected only the Italian market, while the European currency continues to decline with the same previous confidence in pair with the US dollar amid expectations of another reduction in interest rates in the eurozone. 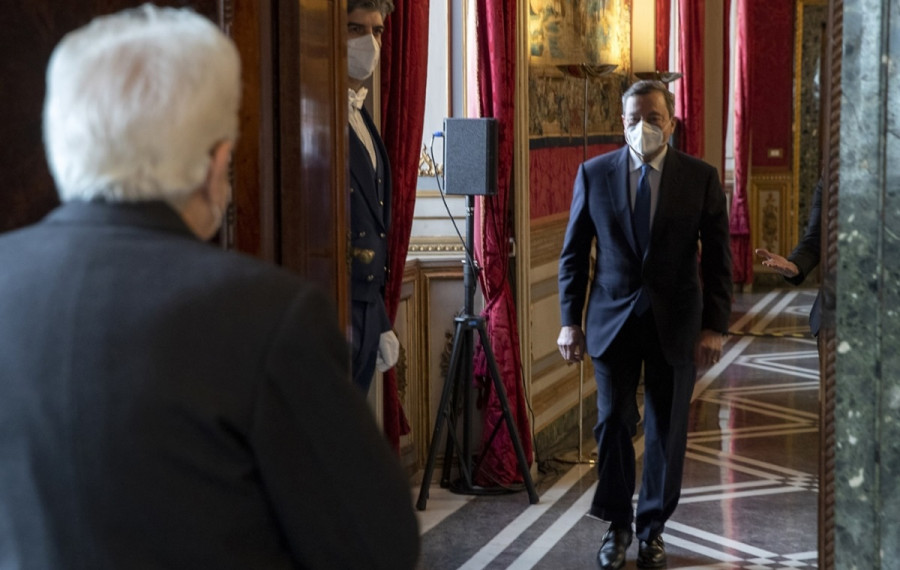 Italian President Sergio Mattarella met with Mario Draghi today after another round of talks failed to reach an agreement between the parties on a new government led by Giuseppe Conte, who had hoped to return to lead the administration. Instead, the Italian president formally asked former European Central Bank President Mario Draghi to help form a government.

Draghi will be given complete freedom to form a new administration, which will help to reach a compromise and conclude a political alliance between the parties. The broad powers also indicate that Mattarella is not happy that the party leaders have provoked another political crisis and failed to resolve it in a short time.

At the time of the news, the spread of Italian and German 10-year bond yields, a key risk indicator, had fallen to its lowest level since 2016 and was close to falling below the psychological threshold of 100 points. The FTSE MIB share index rose by 2.3%, becoming the best indicator among the main stock markets in Europe.

As noted above, Mario Draghi was forced to invite Mattarella after a crisis in the ruling coalition led to the resignation of Italian Prime Minister Giuseppe Conte.

Mario Draghi is also hoped for as a politician who can lead the country out of the economic crisis. Let me remind you that the Italian economy shrank by almost 9% in 2020, which is one of the largest recessions in Europe. The COVID-19 pandemic and prolonged lockdowns have dealt a serious blow to Italy. Public debt has risen to 160% of gross domestic product, the second-highest in the EU after Greece. In a recent speech, Mario Draghi said that Italy needs stronger economic growth to cope with its debt. This will require a very careful approach to the allocation of funds for 200 billion euros that can be allocated from the EU reconstruction fund.

The involvement of such a major political figure as Mario Draghi will have a positive impact on the Italian economy, but only if all the tasks set will be fulfilled, and not ignored and revised in every possible way. We all know how Italy likes to spend money. Not the desire to save, but only to increase spending and increase the huge national debt – in the blood of the political Italian elites, so Mario Draghi will have a difficult time coping with the tasks assigned to him.

The European currency continued its decline in pair with the US dollar, completely ignoring all indicators and fundamental data. Although it was already clear that the private sector of the eurozone will continue to shrink in January this year amid the COVID-19 pandemic. According to the IHS Markit survey, the final composite PMI for the eurozone fell to 47.8 points in January from 49.1 points in December 2020. IHS Markit expects a decline in the eurozone’s GDP in the 4th quarter of last year, and most likely, with current trends that persist during the period of partial lockdown, it will not be possible to avoid it in the 1st quarter of 2021.

The service sector is the main drag on the European economy, with activity contracting for the fifth month in a row.

The German composite PMI index fell to a seven-month low of 50.8 points, completely coinciding with the preliminary estimate. In December, the indicator was at the level of 52.0 points. The service sector continued to contract for the fourth month. The PMI index fell to 46.7 points from 47.0 points in December.

As for France, the composite PMI fell to 47.7 points in January from 49.5 points a month earlier. The index of business activity in the service sector was 47.3 points against 49.1 points in December.

The main question for traders in the first half of the day was whether prices in the eurozone will be able to show growth in January this year or not. Today’s report shows that consumer prices in the euro area rose in January for the first time in six months. According to EU data from Eurostat, the EU-standardised consumer price index rose by 0.9% year-on-year in January after falling by 0.3% in December. Economists had forecast growth of 0.5%.

Core inflation, excluding energy and food prices, accelerated by more than 1.4% from 0.2% in December. Economists had forecast growth of 0.5%.

As for the technical picture of the EURUSD pair, it remained unchanged. An important target for buyers of risky assets is the resistance of 1.2055. Its breakout will quickly strengthen demand for the euro and open a direct road to the highs of 1.2090 and 1.2130. The key task of the bulls until the end of the week will be to regain control over the level of 1.2185. We can talk about maintaining pressure on the euro after a confident breakthrough of the support of 1.2015, which sellers of risky assets still cannot do. In this scenario, the pair can quickly fall to the minimum of 1.1970 and then get to the larger support of 1.1925.

The British pound continued to decline against the US dollar after yesterday’s attempt by the bulls to reverse the downward trend. However, until the trading instrument goes beyond the side channel, it will be wrong to count on a certain directional movement in any of the sides. A break of the upper limit of 1.3755 will certainly open up prospects for strengthening the pound in the area of the 38th figure, and higher to the highs of 1.3880 and 1.3960. It will be possible to talk about the formation of more serious pressure on the pound only after the breakout of the minimum at the base of the 36th figure, which will push the pair into the area of 1.3530 and 1.3460.

As for today’s figures for the UK, the pressure on the pound was formed after the release of a report indicating that the service sector continued to contract at the fastest pace in the last eight months. The temporary closure of businesses in the face of the third national lockdown of the economy was enough for IHS Markit data to point to a decline in the purchasing managers’ index for the services sector. The indicator fell to 39.5 points from 49.4 points in December. Let me remind you that finding the index below 50 points indicates a reduction in the activity. The UK economy is expected to contract sharply in the 4th quarter of 2020 and the 1st quarter of 202. After that, more or less steady growth will begin, which will be supported by deferred demand due to the easing of quarantine measures and restrictions.