In the first half of the day, there were no signals to enter the market. According to the classics of this week – after the release of good fundamental data, the euro fell, however, the bears failed to push the support level of 1.2018. A few tests and a return to this level also did not lead to the formation of a good buy signal, as trading continued mainly above and below the level of 1.2018, completely confusing all the players’ cards. All the emphasis is now placed on the second half of the day and on the data that will be published. 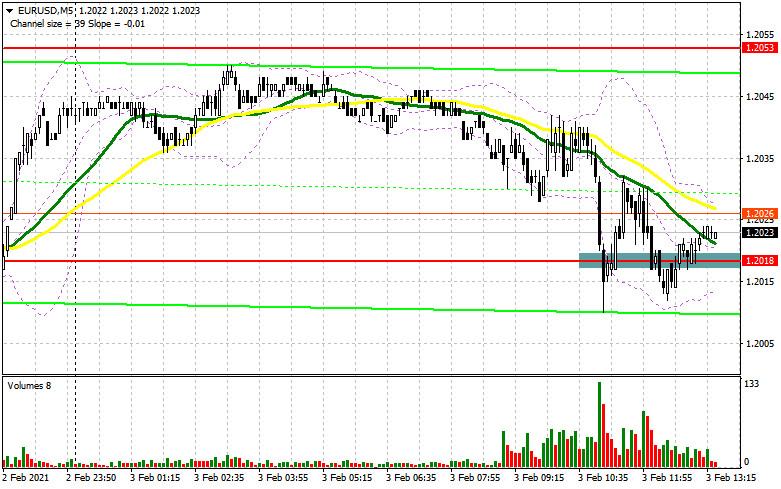 The goal of the bulls, during the US session, will be the return of the resistance of 1.2053, which they missed yesterday and on which quite a lot depends. However, before talking about the growth of the euro, the bulls will need to make every effort to prevent the breakdown of the new low of 1.2015. Only weak fundamental data on the US economy, together with the formation of a false breakdown at the level of 1.05, will lead to the formation of a signal to buy EUR/USD. However, only a return and consolidation at the level of 1.2053 will build a more powerful momentum, which will lead to the recovery of EUR/USD already in the area of the maximum of 1.2088, where I recommend taking the profits. In the event of a further fall in the euro and a lack of activity in the support area of 1.155, I recommend postponing long positions until the test of the minimum of 1.1986. A larger support level is seen in the area of 1.1923, from which you can buy the euro immediately on the rebound with the expectation of an upward correction of 20-25 points within the day. The probability of an upward correction is also indicated by the MACD indicator, on which a bullish divergence is formed. Updating the lows of the day did not lead to the same update of the lows on the indicator.

Sellers returned the euro to the support area of 1.05, however, it is not possible to gain a foothold below this range yet. In the second half of the day, the bears will try to maintain control over the level of 1.2053 and in the case of growth, only the formation of a false breakdown there will form a signal to sell the euro in the continuation of the bear market. A more important goal is to break the low of 1.05, where all the downward movement stopped today. A break and consolidation below 1.155 with a test of it from the bottom up forms another signal to sell the euro with an exit to the support of 1.1986, where I recommend fixing the profits. A longer-range target for sellers at the end of the week will be a minimum of 1.1923. In case of recovery of EUR/USD after weak US data and lack of activity in the resistance area of 1.2053, I recommend not to rush to sell. The optimal scenario is to open short positions after the resistance update at 1.2088. However, from this level, you can only expect a small downward correction of 15-20 points within the day. 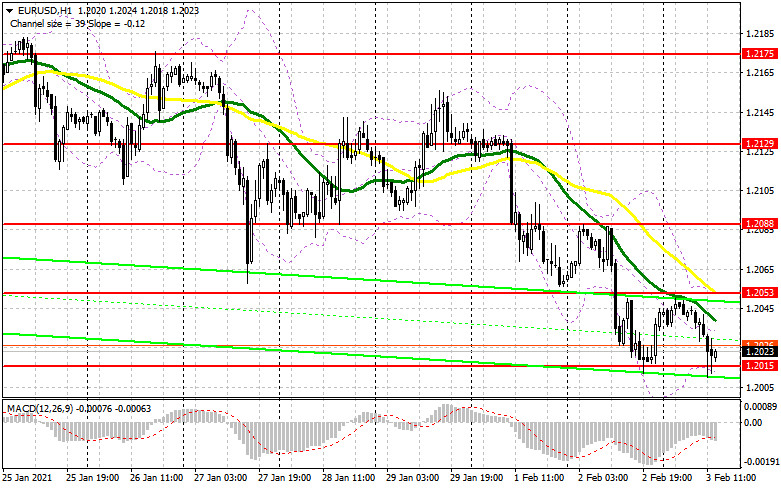 Let me remind you that the COT report (Commitment of Traders) for January 26 recorded a sharp increase in long positions and a reduction in short ones. The incoming data limits the upward potential of the euro, as does the fact that vaccination in the euro area will take place at a slower pace than expected. This is sure to affect GDP for the 1st quarter of this year, however, it is unlikely to seriously affect the medium-term prospects for the recovery of EUR/USD. With each significant downward correction of the pair, the demand for the euro returns, and the lower the rate, the more attractive it will become for investors. The prospect of lifting the quarantine will keep the market positive in the future. However, the risk of extending the quarantine measures in February of this year is still a deterrent to the growth of the euro. The COT report shows that long non-profit positions increased from the level of 236,533 to the level of 238,099, while short non-profit positions decreased from 73,067 to the level of 72,755. Due to the continued growth of long positions, the total non-commercial net position rose to 165,344 from 163,466 a week earlier.

Trading is below 30 and 50 daily moving averages, which indicates a fall in the euro in the short term.

US stocks open lower across the board

US stocks set to open lower