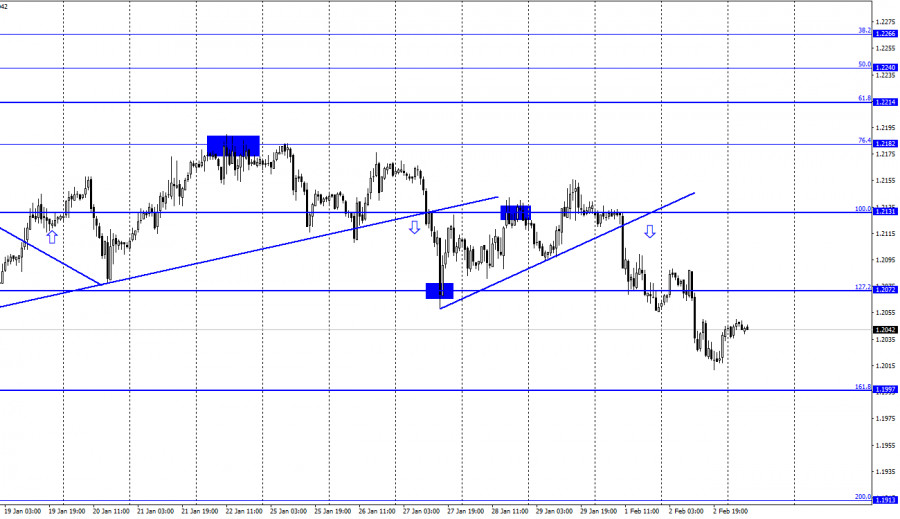 On February 2, the EUR/USD pair continued the process of falling after a close was made under the ascending trend line. Thus, the mood of traders is now characterized as “bearish”, and the process of falling can be continued in the direction of the corrective level of 161.8% (1.1997). It is impossible to say that there has been a lot of important news in recent days. I would even say it differently. It is precise because there are no important topics and important news right now that the US dollar has started the growth process. Of course, the fact that the euro currency has been growing for a long time and bull traders just needed a pause, and no one canceled the correction, also played a part. However, I cannot conclude that the dollar is growing at this time for any specific reasons related to the information background.

Yesterday, the report on GDP in the fourth quarter in the European Union was released. It showed a smaller drop in the indicator than traders expected, however, the euro currency continued to fall. It seems that traders are now paying little attention to economic reports. In the United States, negotiations are continuing between representatives of the two ruling parties – the Democrats and the Republicans – on a new package of assistance to the economy. There is still no mutual understanding, so either the Democrats will have to find workarounds to adopt Joe Biden’s $ 1.9 trillion “economic rescue plan”, or they will have to bargain for several more months with the Republicans, who offer a package of only $ 0.6 trillion. Everyone understands that such serious disagreements can be cleaned up within a few months. 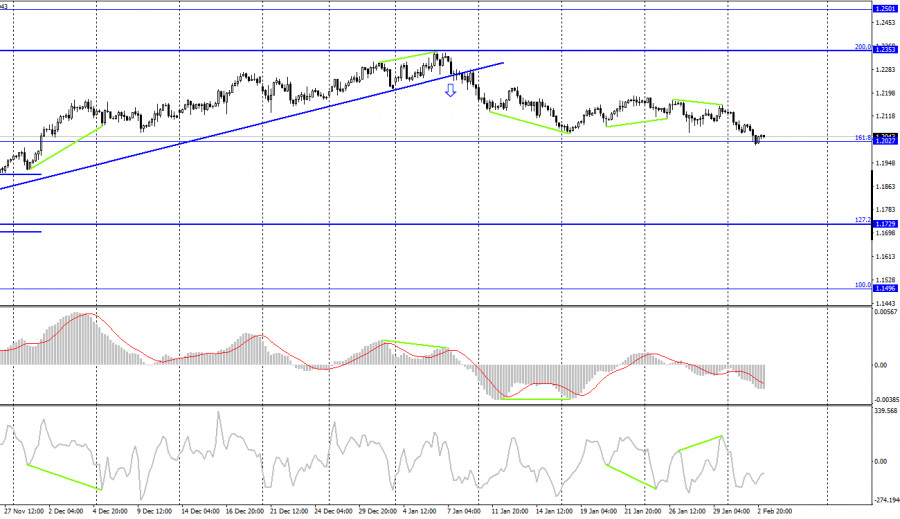 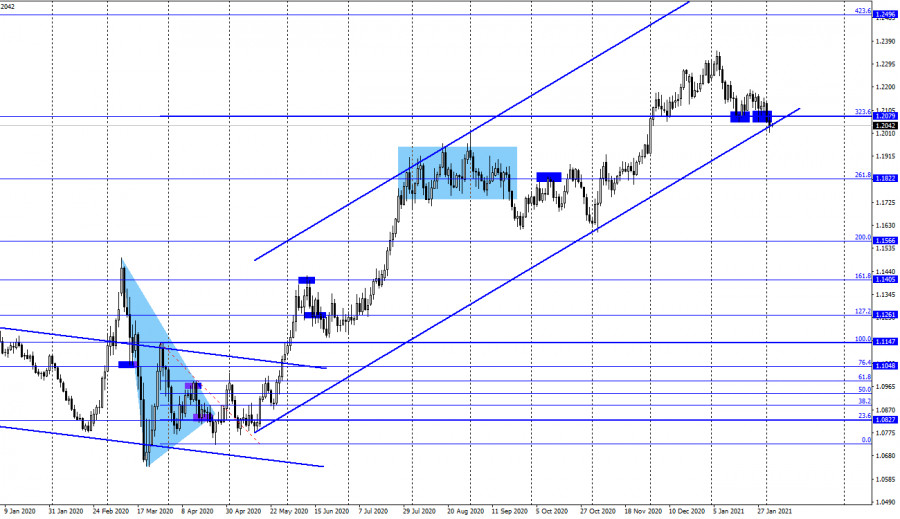 On the daily chart, the quotes of the EUR/USD pair performed a fall to the lower border of the upward trend corridor. A rebound from this line will work in favor of resuming growth in the direction of the corrective level of 423.6% (1.2496). Closing the pair under an upward trend corridor will increase the probability of a fall in the medium term. 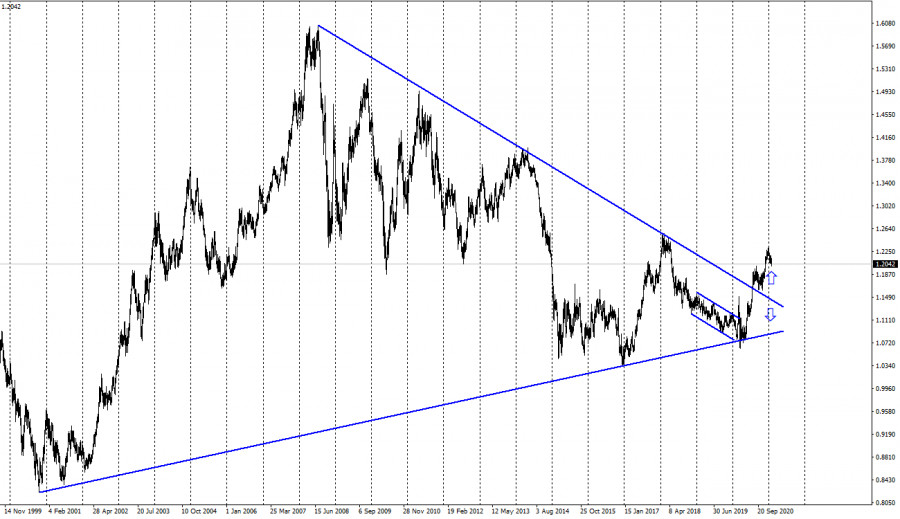 On February 2, the calendar of economic events in the United States was empty. In the European Union, an important report on GDP was released, which was not taken into account by traders.

US – ISM composite index for the non-manufacturing sector (15:00 GMT).

On February 3, the European Union and the United States will release data on business activity in the service sectors. And the EU will also release an inflation report, and in the US – the ADP report on changes in the number of people employed. They are more important than business activity data. 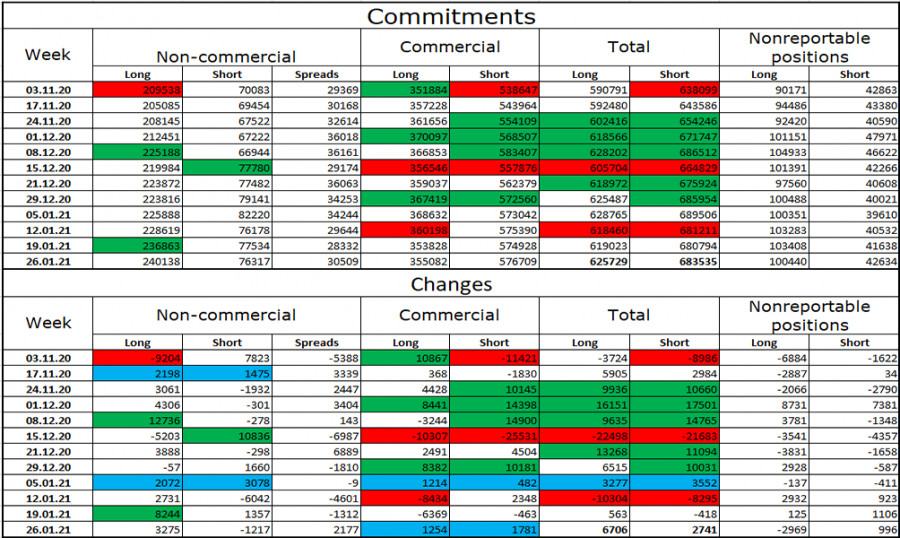 Last Friday, another COT report was released, which was intended to help answer the question, what are the prospects for the euro currency? At the beginning of 2021 (in its first month), the quotes of the euro currency fell more than they grew. However, as 3 out of 4 COT reports show during this time, the “Non-commercial” category of traders is once again increasing the number of long contracts on their hands. This means that speculators continue to believe in the growth of the euro currency. During the last reporting week, major players opened more than 3 thousand long contracts and closed more than 1 thousand short contracts. Thus, their mood was again more “bullish” than a week earlier. Are we waiting for the new growth of the European currency?

EUR/USD: Powell’s statements raised the US dollar up, but brought down US stock and bond markets.

Powell did not want to make false promises to the market