Several signals to enter the market appeared yesterday. Let’s sort them all out. In my morning forecast, I paid attention to short positions in the resistance area of 1.3706, provided that a false breakout was formed there, which happened. Since there weren’t any significant fundamental reports, buyers of the pound did not receive support after trying to surpass resistance at 1.3706. Subsequently, the price returned to the area below this level, which resulted in forming a false breakout and a signal to open short positions in the pound during the downward correction. As a result, the downward movement brought more than 40 points of profit, as the pair quickly fell to the support area of 1.3657, where it stopped again. The breakout of the 1.3657 level was passed without a reverse test, so I missed the downward movement to the 1.3621 area. However, we managed to make money on being able to buy on a rebound from the support of 1.3621, which I recommended to do in my forecast for the US session. As a result, the correction has fully worked itself out and more than 25 points could still be taken from the market. 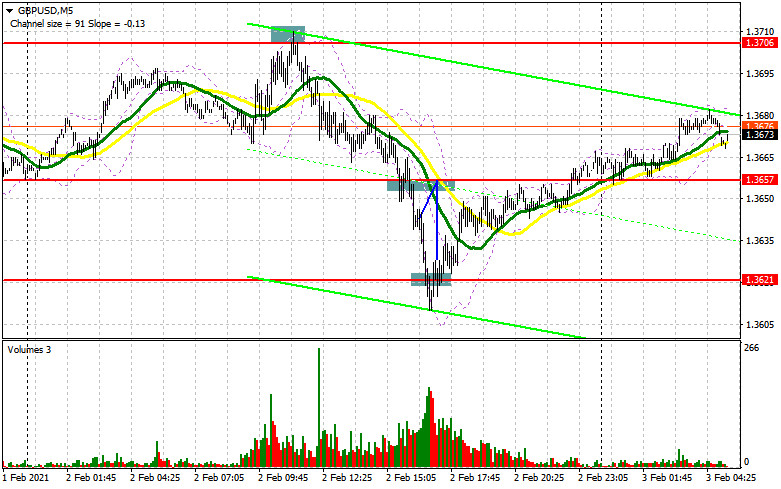 Despite the high volatility, the technical picture has not changed. Pound buyers need to work hard to regain control of the market. A breakout and consolidation above resistance at 1.3707 and being able to test it from top to bottom can create a good entry point into long positions. In this case, we can expect GBP/USD to return to the area of the annual resistance of 1.3755, where I recommend taking profits. Surpassing this level would open a direct path to the highs of 1.3825 and 1.3879. We can only count on such a large growth if we receive strong fundamental data on the UK services sector, which is unlikely to show a serious recovery in January this year, especially given the lockdown. If GBP/USD is under pressure in the first half of the day, and this may happen after an unsuccessful attempt to break through the middle of the channel, then the buyers must maintain control over the 1.3657 level, which will be quite difficult to do. Forming a false breakout there generates a signal to open long positions in hopes for the pound to recover in the short term. It is possible to open long positions immediately on a rebound after testing the low of 1.3612, counting on an upward correction of 20-30 points within the day.

You can act similar to yesterday. Forming a false breakout near the middle of the 1.3707 channel will weigh on the pair and lead to its succeeding decline. A more important goal is a breakout and being able to settle below support at 1.3657. A disappointing report on the services sector and the composite PMI index and being able to test this level from the bottom up can create a good signal to open new short positions in GBP/USD, for the purpose of falling to lows of 1.3612 and 1.3575, since the pair’s succeeding direction will depend on it. A breakout of these ranges will pull the pound out of the horizontal channel, creating a new downward trend. If the bulls manage to recapture the 1.3707 level in the morning, then it is better not to rush with short positions. The optimal scenario for selling the pound will be the renewal of the 1.3755 high. I also recommend opening short positions immediately on a rebound in the resistance area of 1.3825, counting on a downward correction of 30-35 points within the day. 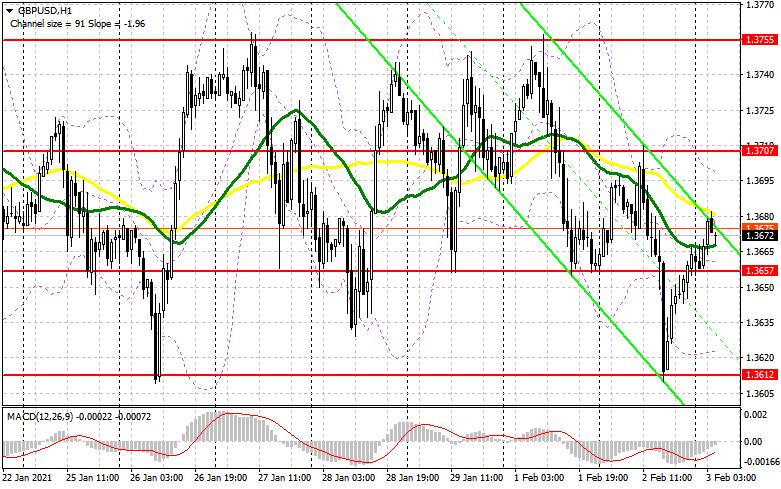