USD/CAD move in range on the H4 chart after failing to make a new higher high. The price has decreased a little developing a potential continuation pattern. The triangle formation could attract more buyers before resuming its upwards movement.

The pair needs some good US data during the week to be able to jump towards fresh new highs. Fundamentally, some positive US figures later today should boost USD/CAD, while poor numbers could add more selling pressure. 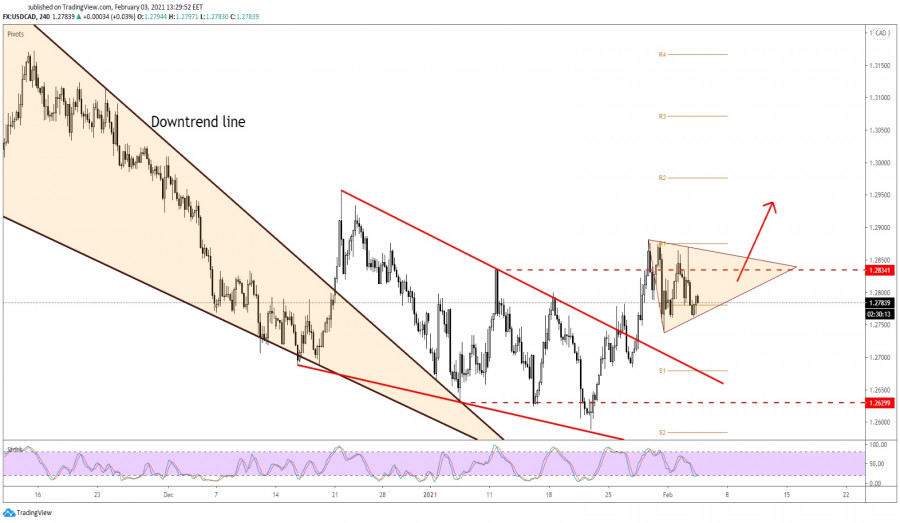 Technically, USD/CAD is expected to increase further after escaping from two Falling Wedge patterns. Unfortunately, the poor data reported by the US ISM Manufacturing PMI and by the Final Manufacturing PMI have weighted on USD’s performance.

An upside breakout from this symmetrical triangle and through the R1 (1.2875) represents a great buying opportunity, signal. USD/CAD has tested and retested the Pivot Point (1.2780) signaling that it could rebound from this level.

Buying Signal – if USD/CAD increases and makes an upside breakout from the current price formation. Closing above the former higher and beyond the R1 (1.2875) indicates a further growth towards the R2 (1.2976) or higher.

Selling Signal – could be represented by a bearish candle closed under 1.2763 today’s low.