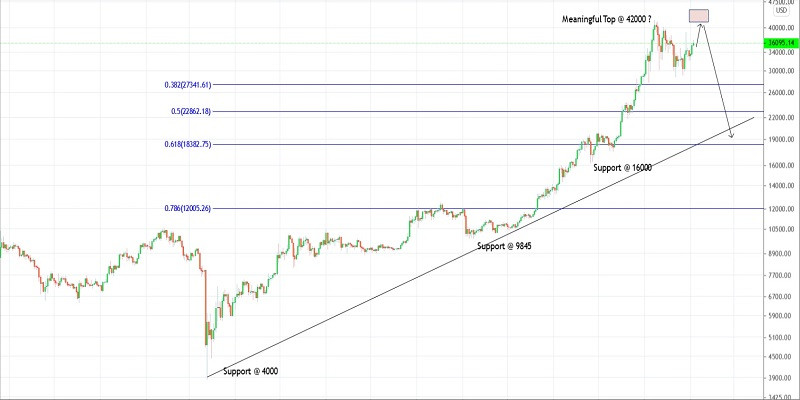 Bitcoin has managed to extend its pullback towards $36,100/300 mark and might be preparing to turn lower again. The crypto is seen to be trading around $36,150 levels at this point in writing and bears might be inclined to push towards $29,000 levels or continue consolidating in a range for few more trading sessions.

Bitcoin might have carved a meaningful top around $42,000 levels and since then has been consolidating within a potential contracting triangle. Immediate resistance is at $40,000, followed by $42,000 mark, while support is seen around $29,400 levels respectively. A break below $29,400 will confirm a bearish breakout and that Bitcoin should push lower towards $18,000 levels, which is fibonacci 0.618 retracement of the entire rally between $3,850 and $42000 respectively.

Also note that the trend line support is passing through $18,000-$19,000 range, which could provide enough support for a bullish turn. Only a consistent break below the trend line would indicate a major trend reversal ahead and the crypto might witness much lower levels, going forward.