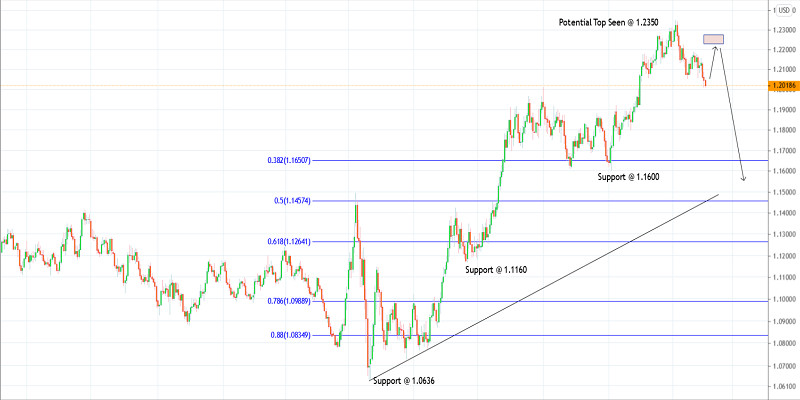 EURUSD continues to slide as bears managed to print 1.2010 lows today. It has now begun to show bullish divergence for RSI on lower time frames and probability remains for a pullback. The single currency pair is seen to be trading around 1.2018 levels at this point in writing and is expected to extend its counter trend rally towards 1.2230/40 levels in the coming sessions.

Immediate support is seen around the 1.2000 handle, while resistance is around 1.2190 levels respectively. The short term wave structure indicates a possibility for counter trend rally towards fibonacci 0.618 retracement levels, around 1.2230 levels (not shown on the daily chart here). The proposed corrective rally seems to be a complex wave but bulls might be poised to push higher in the near term.

Having said that, 1.2350 resistance should ideally stay intact as bears resume control from just above 1.2200 levels going forward. On the larger wave structure scenario, downside potential remains up to 1.1200/1.1300 mark, which is fibonacci 0.618 retracement of the entire rally between 1.0636 and 1.2350 levels respectively.