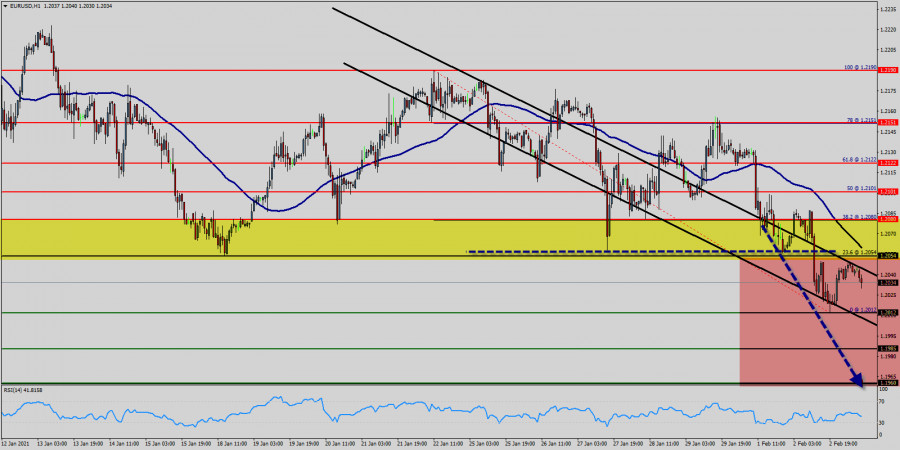 At the same times frame, the EUR/USD pair touches down to 1.2012 level of support which formes a bottom.

Yesterday, the euro currency lastly fell to the support level of 1.2012, testing the level more firmly.

The nearest resistance level for the EUR/USD pair is located near the 100 EMA at 1.2080. If the EUR/USD pair declines below this level, it will gain downside momentum and move towards the next support level at 1.1985.

The 100 EMA is located near 1.2080; for that the EUR/USD pair will likely get significant resistance at this level.

Amid the previous events, the pair is still in a downtrend, because the EUR/USD pair is trading in a bearish trend from the new resistance line of 1.2080ctowards the first support level at 1.1985in order to test it.

However, if a breakout happens at the resistance level of 1.2190, then this scenario may be invalidated.

On the H1 chart. the level of 1.2080 coincides with 38.2% of Fibonacci, which is expected to act as minor support today. Since the trend is below the 38.2% Fibonacci level, the market is still in a downtrend.

Thus, the market is indicating a bearish opportunity below the above-mentioned resistance levels, for that the bearish outlook remains the same as long as the 100 EMA is headed to the downside (1.2080).

The price spot of 1.2080 remains a significant resistance zone. Hence, the trend is still bearish as long as the level of 1.2080 is not breached.