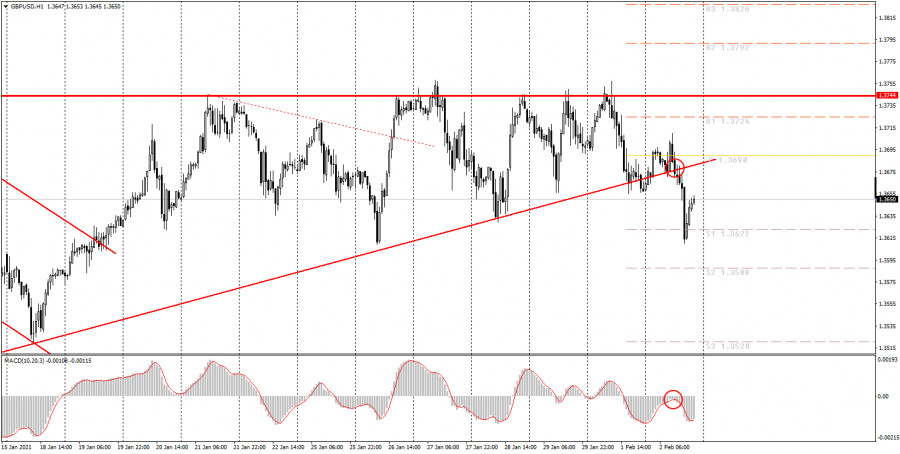 The GBP/USD pair tried to break through the upward trend line all day on Tuesday. The price tried to settle below it during the evening, but very quickly turned back to the upside, thereby forming a false sell signal. If novice traders opened short positions on this signal during the evening, they could lose around 14 points (the losing trade should have been closed at the close of the candle, which brought the price back above the trend line). However, during the daytime, the price settled below the trend line again and this signal has already become correct. We gave 1.3653 and 1.3607 as targets for bearish trading. The first target was reached with relative ease, while the price fell short of the second target by only three points. In any case, novice traders could earn around 20 to 50 points on this signal. Thus, even if a loss was received at night due to a false signal, it was still covered by a profitable trade during the day. In general, the pound/dollar pair crossed the rising trend line and failed to settle above the 1.3744 level. Thus, the chances of a further fall in the British currency sharply increased on Tuesday. Now you need to wait for a new sell signal from MACD.

No major report published in the UK or America on Tuesday, not a single major event. Thus, the dollar strengthened on Tuesday due to technical reasons, not fundamental ones. Five rebounds from the 1.3744 level still played a role.

There will be more interesting reports on Wednesday. First, the UK Services PMI. Secondly, a similar index for the US service industry. Third, a report on changes in the number of employees in the US ADP private sector. The first two reports do not raise any questions and it is unlikely that there will be major changes in them compared to the previous month. However, the report from ADP may provoke a reaction from market participants. Especially if the actual value differs greatly from the forecast. The forecast is +50,000 employees. Any value higher can help the dollar to continue to grow, lower – to provoke a pullback to the upside.

1) Long positions have ceased to be relevant, since the price still broke the upward trend line. So now you need to wait for the upward trend to resume in order to be able to trade bullish again. The most interesting thing is that the price bounced back from the 1.3610 level, from which it had already rebounded on January 26. Thus, further downward movement is not obvious.

2) Short positions have become relevant at the moment, since a new downward trend has formed. However, the price was unable to overcome the 1.3610 level for the second time, so there is also a possibility of returning to the 1.3744 level. However, we still recommend trying to work out the next sell signal (if it is generated at all). To do this, you need to wait for the MACD indicator to discharge as close to the zero level as possible and after that, a downward reversal. The targets in this case will be located near the levels of 1.3622 and 1.3610.

EUR/USD: Markets ectsatic, dollar under siege, but no one knows what will happen next