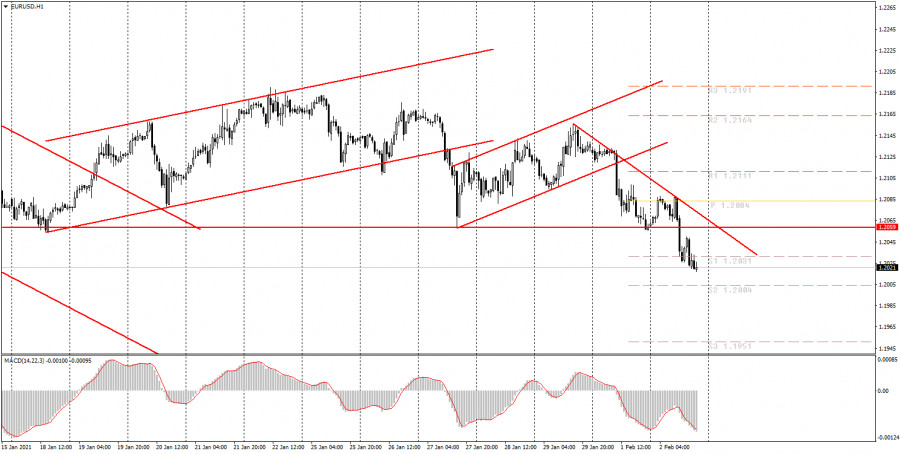 The EUR/USD pair resumed the downward movement without a proper correction on Tuesday. Due to the fact that the price only slightly retreated from the local lows, and the MACD indicator did not manage to discharge to the zero level. Therefore, a weak signal to sell from the MACD indicator was formed, but we advise you to consider only strong and clear signals. Those have not been formed at the moment. Therefore, according to our recommendations, one should not have opened trading positions. In general, the downward trend that has formed for the pair after the quote surprised the rising channel will remain. A downward trend line was also built today, which also supports bearish traders. Thus, in the current situation, you should either wait for a new sell signal from MACD, or to have the price settle above the trend line. The main thing is that the price managed to overcome the 1.2059 level, which significantly increases the likelihood of continued strengthening of the US dollar.

The entire macroeconomic background on Tuesday was reduced to a single report on the Gross Domestic Product in the European Union for the fourth quarter. Take note of the projected decline in GDP, from 1% to 2.2%. However, in reality, the decline was only 0.7% q/q. Thus, the report came out better than expected. However, it did not matter to the euro at all, as the markets continued to cheerfully ignore the statistics. In addition, it is too early to rejoice, there will be two more estimates of GDP for the fourth quarter, there may still be a deterioration or improvement in the indicator. The main thing that we can say is that traders are still ignoring the foundation and macroeconomics. Therefore, technical factors are a priority.

The indexes of business activity in the service sector of the US and the European Union will be published on Wednesday. And here, I must say, the differences are clearly visible. There is a 99% probability that business activity in the eurozone will remain below the 50.0 level, which will indicate a decline in this area, but in the US, on the contrary, there is a 99% probability that the index will be above the 50.0 level, which indicates growth. Thus, if traders suddenly decide to pay attention to statistics, then these reports can help the dollar rise. But the report on EU inflation has a very strange forecast for January, at +0.4%. Recall that deflation has been recorded in Europe in the last five months, that is, negative inflation. Not least because of the strong growth of the euro against the dollar over the past ten months. Now a sharp acceleration of inflation is expected. This is strange. But if the forecast comes true, then the euro could rise due to this report. If, again, the markets pay attention to statistics.

1) Long positions have lost their relevance at the moment, since the price left the second rising channel. You can consider new long positions on the pair if the quote settles above the downward trend line. You can aim for levels 1.2084 and 1.2111.

2) Trading for a fall is currently relevant. The 1.2059 level has been overcome, so the chances of further downward movement have increased. However, we advise you to trade bearish only after the next round of correction, the MACD indicator is discharged to zero and a sell signal is generated. Or if the price rebounds off the trend line. The targets are 1.2004 and 1.1951.