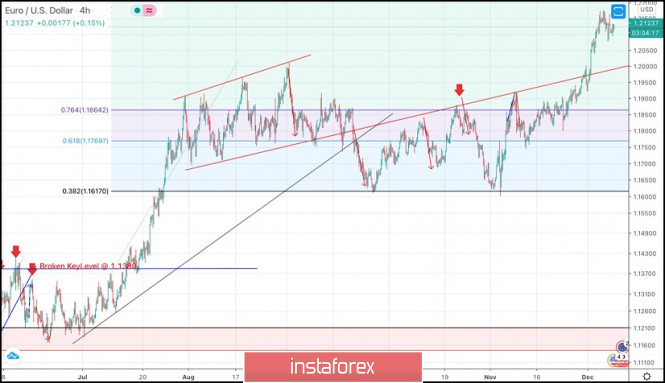 Hence, another bullish breakout was being demonstrated towards 1.1870 which corresponded to 76% Fibonacci Level.

Moreover, the recent bearish H4 candlestick closure below 1.1770 was mentioned in previous articles to indicate a valid short-term SELL Signal. All bearish targets were already reached at 1.1700 and 1.1630 where the recent bullish recovery was initiated.

However, The recent bullish pullback towards the price zone of 1.1950-1.1970 failed to find sufficient bearish rejection.

The EURUSD pair was trapped between below the previous key-level (1.1950) until bullish breakout occured to the upside. Further bullish advancement was expressed towards 1.2150 as expected.

Currently, bearish closure and persistence below 1.2050 then 1.1950 is needed to abort the ongoing bullish momentum to initiate a bearish movement at least towards 1.1860 and 1.1770. Otherwise, the intermediate-outlook for the pair remains bullish.