USD/CHF is trading in the red at the 0.8893 level right below the 0.8900 psychological level signaling a deeper drop. The poor NFP data reported on Friday has punished the greenback, which it has tried to recover.

CHF could resume its appreciation as the Switzerland Unemployment Rate remained steady at 3.4% as expected. On the other hand, the US is to release the Revised Nonfarm Productivity, Revised Unit Labor Costs, and the NFIB Small Business Index, but I don’t believe that these figures could change the sentiment. 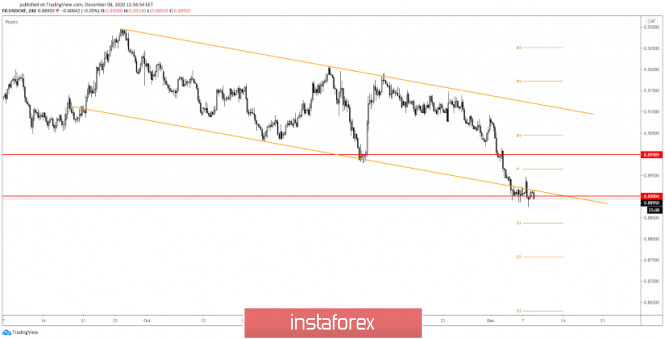 USD/CHF has stabilized under the channel’s downside line signaling strong sellers and massive pressure. Stabilizing under 0.89 could really signal that the downside movement will continue.

The most recent bearish engulfing suggests a potentially deeper drop. Still, a strong bearish momentum should be validated by a new lower low, drop under 0.8875 level. The bearish scenario could be invalidated by a big Pin Bar or by a major Bullish Engulfing pattern.

Buy a reversal pattern (Pin Bar, Bullish Engulfing) followed by a bullish closure above the 0.8946 former high. The target is seen at the channel’s upside line.