Friday’s release of the US employment report, which was weaker than expected, failed to defeat bullish enthusiasm in US stock markets and upward course of US bond yields recently. On the contrary, the data simply strengthened expectations that Congress will reach an agreement on a financial support plan very soon that could be adopted before this year ends.

The growth in the number of non-farm jobs in November was disappointing –245,000 jobs were created, which is lower than both the forecast and October values of 610,000. Moreover, the recovery from the April collapse is sharply slowing, which increases the chances of massive support measures for the economy.

The US dollar is actively selling again for the second week in a row on the futures market. The consolidated short position for the reporting week declined by 1.617 billion and fell to -27.099 billion. Therefore, investors are likely to prepare for another large-scale support measures. 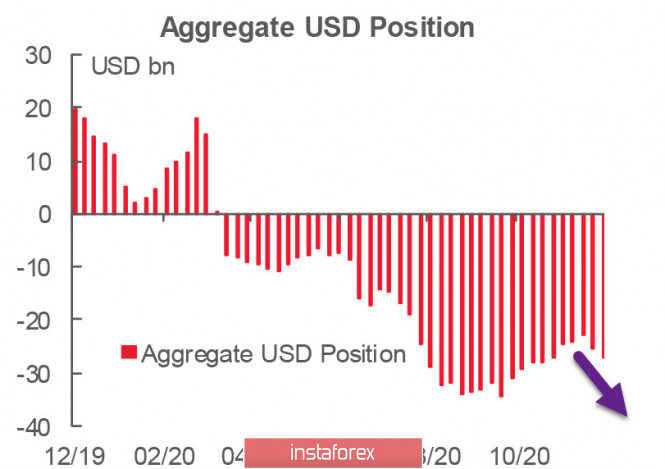 The indicated currency will remain under pressure as the markets simply do not see the reasons for its growth. At the same time, both Congress and the Fed are preparing large-scale measures and stock indexes are rumored to be updating records. Thus, there is no reason to believe that the trend will change.

According to the CFTC report, euro’s net long position rose by 557 million over the reporting week, but the estimated price lost momentum and moved in a horizontal direction. So, traders will most likely wait for Thursday, when the ECB will possibly make adjustments to its numerous stimulus programs. 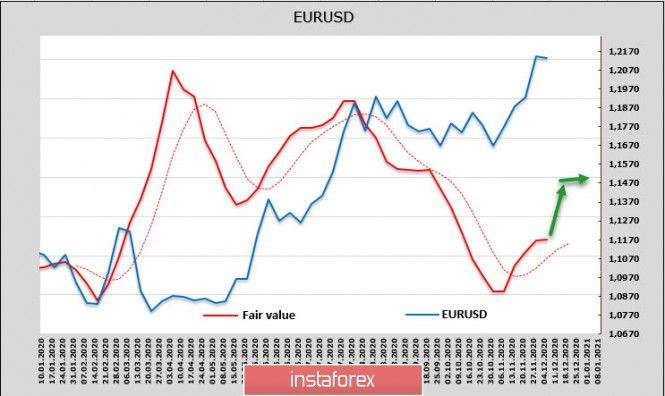 ECB members have repeatedly hinted that they are preparing a series of drastic measures. For example, it could be a one-year extension of the PEPP program (announced by the representative of the Bundesbank, Schnabel) with an increase in QE volumes from the current 1.35 trillion to 2 trillion. Accordingly, if the rumors are confirmed and the ECB meeting will be held next Thursday, then the euro will be under pressure for several days at least until December 16, when the Fed announces its new steps.

The ECB is rumored to be ready to vote in a consolidated manner, meaning the internal discussion will not be made public. Currently, the Eurozone economy looks confident, the latest retail sales report showed growth of 1.5% in October with a forecasted growth of 0.8%, consumer demand is also recovering, and emergency measures are not required.

Trading in a range in anticipation of the ECB’s decision will be the most likely scenario for the coming days. The upward momentum for the euro is still strong, but players will have to wait. In turn, a corrective decline is possible to 1.2030/40, where there will be a chance to buy. The second support is located at 1.20, but a decline to it is unlikely.

The pound was selling on Monday morning, as negotiations between UK Prime Minister Johnson and EU Ursula von der Leyen over the weekend, failed to lead to a breakthrough. On Friday, the probability of a deal being concluded was estimated around 60%, however, the situation has rolled back again today. Nevertheless, negotiations remain, and if there is any success, then EU leaders will gather for an emergency summit on Thursday.

The short position in the pound has significantly declined during the reporting week and the estimated price is sharply inclined upwards. In general, the market is in a positive mood, as calculations show that majority are waiting for a deal and a sharp growth in the pound. 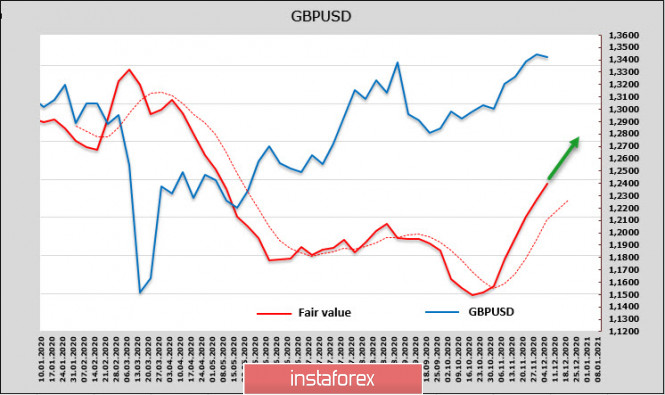 At the same time, we must assume that every hour of delay increases the probability of a general failure, so the pound will be under pressure until there is positive news from the negotiations. The market does not consider any other factors affecting quotes at this stage.

There was an attempt to break through the resistance level of 1.3479, but failed to consolidate above by the end of the day. This is a negative factor that increases the probability of a pullback and finding a local bottom. There are two supports – the most likely target for the bottom is 1.3330/40 in case of positive results from the negotiations, and 1.3110/20 if there is no time left for the summit.