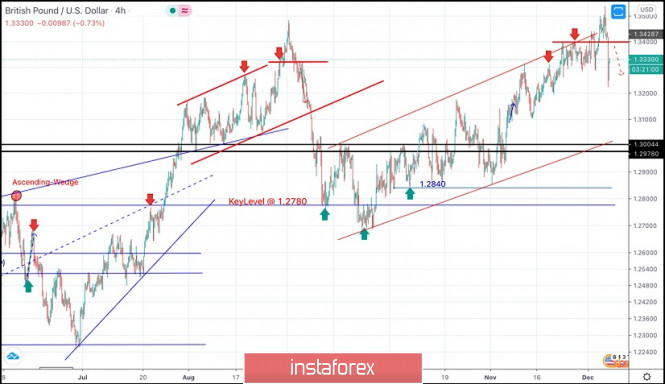 Back in August, the GBP/USD pair failed to pursue towards price levels around 1.3400 as a final projection target for the previous bullish pattern.

Instead, another bearish movement was targeting the price level of 1.2840 and 1.2780 where bullish SUPPORT existed allowing another bullish movement initially towards 1.3000 which failed to maintain sufficient bearish momentum.

Later on, further bullish advancement was expressed towards 1.3380-1.3400 where the pair looked overbought after failure of the previous price zone to offer sufficient bearish pressure on the pair.

Temporarily, bearish Price action was demonstrated around the price levels of (1.3380-1.3400) as a valid SELL Entry Signal.

Initial bearish target was reached around 1.3300. However, the pair has failed to pursue towards lower targets.

Instead, another bullish spike was expressed towards 1.3480-1.3500 where the upper limit of the depicted movement channel provided significant bearish pressure on the pair.

As the GBPUSD pair looked overbought around the price levels of 1.3500. Hence, intermediate-term turned into bearish when the pair returned to move below 1.3400.