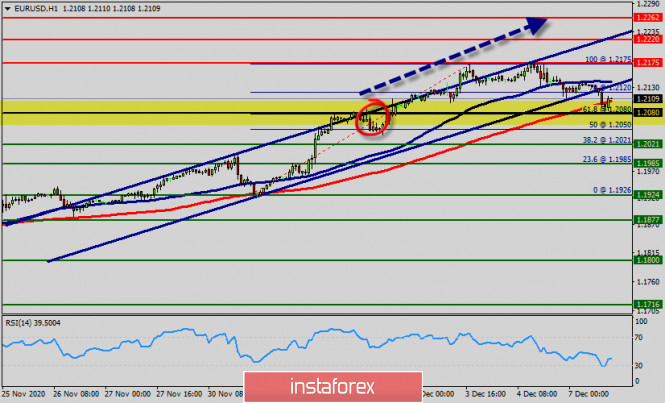 A move higher could take the pair until the double top at 1.2175, a challenging point over the last week. Higher resistance could next be found around the 1.2175 barrier, taken from the peak on September 3rd, 2020.

The pair is trading above its pivot point. It is likely to trade in a higher range as long as it remains above the pivot point (1.2080).

The RSI holds above 40, while the Moving average continues to strengthen in bullish territory above its trigger line.

Also, it should be noted that a daily pivot point has already set at the level of 1.2080. Equally important, the EUR/USD pair is still moving around the key level at 1.2080, which represents a daily pivot in the H1 time frame at the moment.

The EUR/USD pair will probably continue to move upwards from the level of 1.2080

Amid the previous events, the price is still moving between the levels of 1.2080 and 1.2220. In overall, we still prefer the bulish scenario as long as the price is above the level of 1.2220.

Moreover, in larger time frames the trend is still bullish as long as the level of 1.2080 is not breached.

On the other hand, in case a reversal takes place and the EUR/USD pair breaks through the support level of 1.2021, a further decline to 1.1924 can occur which would indicate a bearish market.

If the pair fails to pass through the level of 1.2080 (support, pivot, 61.8% Fibonacci) , the market will indicate a bullish opportunity above the strong support level of 1.2080.

In this regard, buy deals are recommended higher than the 1.2080 level with the first target at 1.2175. It is possible that the pair will turn upwards continuing the development of the bullish trend to the level 1.2220. The third resistance hasy already placed at the 1.2262 price.

However, stop loss has always been in consideration thus it will be useful to set it below the last bearish wave at the level of 1.2021 (notice that the major support today has set at 1.1985).