Gold is trading at $1,833 and it could drop deeper again in the short-term after the most recent rebound. the potential rally of the US dollar index could force the yellow metal to decline. Actually, XAU/USD is somehow expected to drop after making a new low and after decreasing under the $1,848 critical support.

Gold is trading in the red at the time of writing and it is trying to erase the latest gains, a major bearish engulfing could suggest selling. 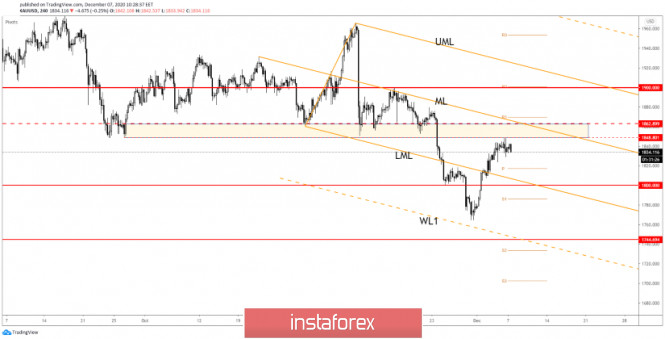 XAU/USD almost reached and test the $1,848 static resistance, former support. Its failure to hit this level signals strong sellers. I’ve told you in my previous analyses that bearish bias remains intact as long Gold is trading below the $1,848 level and under the median line (ML) of the descending pitchfork.

The $1,800 level and the lower median line (LML) represent the near-term targets, support levels. If it tumbles under these levels, bears could take the upper hand. The bearish scenario could be invalidated by a broader corrective phase.

Personally, I believe that the rate is located within a neutral zone, a drop below the $1,800 level will bring a selling opportunity, while a breakout through the $1,862 level represents a bullish signal.