In the most global terms, the construction of the upward trend section continues, however, the wave marking takes a complex form and may become more complicated more than once. The section of the trend that started on September 23 took a five-wave form, but not an impulse one. A successful attempt to break the previous peak indicates that the markets are ready for further purchases of the British pound. The supposed wave e has also assumed a five-wave form and may be nearing its end. At the same time, the level of demand for the pound and the news background is now a priority. 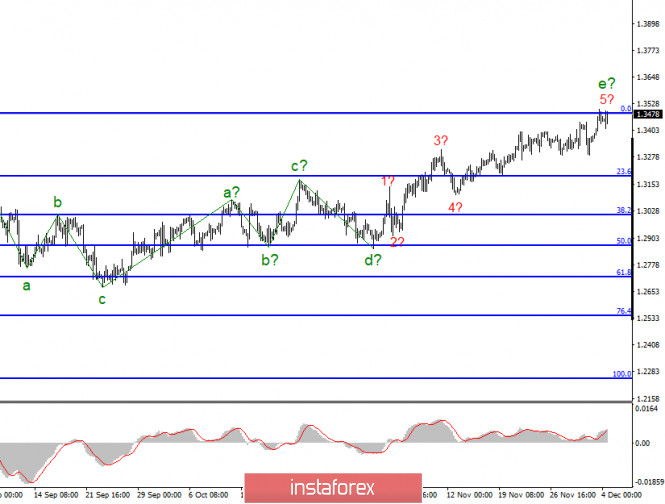 The lower chart clearly shows the a-b-c-d-e waves of the upward trend section. The assumed wave e took a five-wave form, which is also visible on the chart. However, even with this complication, it is nearing completion. Even if the entire upward section of the trend continues to build and complicate, now three waves should be built down since we see the top five on the chart. At the same time, demand for the British pound remains very high, which may lead to more extensions of the wave e.

The British pound continues to trade close to the previously reached highs. The key topic for the pound/dollar instrument remains the topic of negotiations between London and Brussels regarding future trade relations. Although the parties are still engaged in these negotiations, the markets continue to believe that a deal will eventually be reached. However, the British government said today that Brussels presented new demands, took a tougher stance than before, and set all progress in the negotiations a step back. Downing Street believes that the EU has destabilized the negotiations. According to one of the British MPs, Michel Barnier and his team introduced new points to the negotiation process. Progress is still possible in the coming days, however, this prospect is decreasing.

One of the most pressing issues now is the future access of French fishermen to British waters. French diplomats have repeatedly stated that they will not agree to any deal. The deal must take into account the interests of France. Emmanuel Macron believes that the approval of the deal should be postponed until 2021 and in no case rush to sign it.

Other news and reports don’t interest the markets at all right now. Yesterday in America, the index of business activity in the service sector was released, which fell slightly compared to October. However, we can hardly say that the decline in the US currency is somehow related to this index. More important reports on US unemployment and the number of new jobs created outside the agricultural sector will be released today. These reports may already trigger a reaction from the markets. An unsuccessful attempt to break through the 0.0% Fibonacci level will also indirectly indicate the readiness of the markets to sell the British dollar.

The pound/dollar instrument continues to build an upward trend, however, its last wave is nearing completion. Thus, now I recommend looking closely at the sales of the instrument, however, the British are not yet giving clear signals about the end of the upward section of the trend. At the same time, purchases of the instrument are now quite dangerous, given the uncertainty associated with the trade deal and the current wave markup.