The pound showed the greatest activity yesterday, and at first glance, I would like to say that it’s all about macroeconomic statistics. Business activity indices in the UK came out better than forecasts. However, this is far from the case. In fact, the pound completely ignored all sorts of statistics. Not only from Britain, but also from the US. The main driving force is the endless negotiations on Brexit, which are already going on around the clock. The negotiators have almost no time left. But it is precisely because the negotiations do not stop, and their intensity only increases, that provides hope that the parties will come to a mutually beneficial agreement any day now. This belief pushed the pound up. However, the mood of market participants dramatically changed closer to the end of the US session. The fact is that London suddenly announced that the negotiations were at an impasse, as the European Union suddenly put forward new demands. The funny thing about this whole situation is that EU representatives deny any new conditions. And the UK does not give explanations about these new requirements from Brussels. In any case, since there have been such conversations, it is obvious that the negotiations are extremely difficult. And this is the best case scenario. It is quite possible that they can’t get off the ground. So London’s statements may well be nothing more than another attempt to exert psychological influence in order to force Brussels to make serious concessions. Simply put, this is more like blackmail. And this is easy to believe, since the UK has tried to pull off such a trick more than once. Another thing is that in the best case, this allows them to buy time and extend talks. London has never been able to achieve anything else. This leads to a fairly simple conclusion that the final date of Brexit may again be pushed back. For example, in the middle of next year, or something like that. Delaying the process, which is already boring everyone, will no longer be able to support the pound. 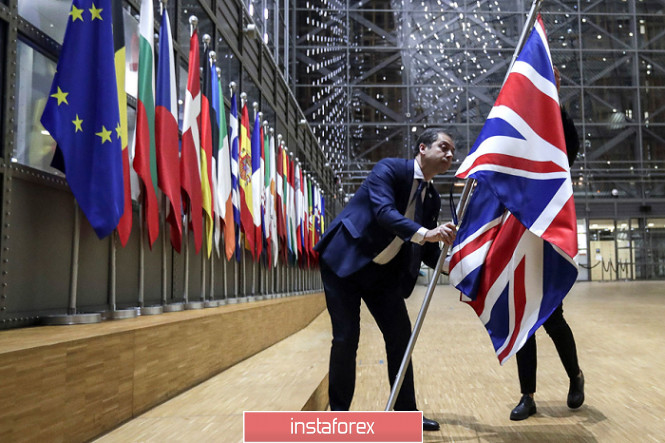 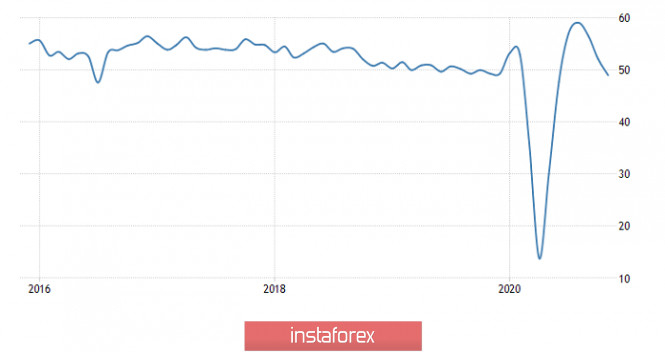 On the other hand, the US business activity indices really grew stronger than forecasted. In particular, the index of business activity in the service sector rose from 56.9 to 58.4, while, according to preliminary estimates, it should have risen only to 57.7. According to the same preliminary estimates, the composite PMI should have grown from 56.3 to 57.9, but not to 58.6. Where it actually ended up. A striking difference from what is happening in the United Kingdom. But what is much more important is that the number of repeated applications for unemployment benefits decreased from 6,089,000 to 5,520,000. It was expected to fall to 5,890,000. In addition, the number of initial applications for unemployment benefits fell from 787,000 to 712,000, not 774,000. What’s important here is the simple fact that the report of the United States Department of Labor will be released today, and there are strong fears that its content will reflect a sharp slowdown in the pace of labor market recovery. The data on the applications gives hope that the worst fears will never come true. However, the pound did not respond to all of this data. Brexit is the factor that causes it to worry. 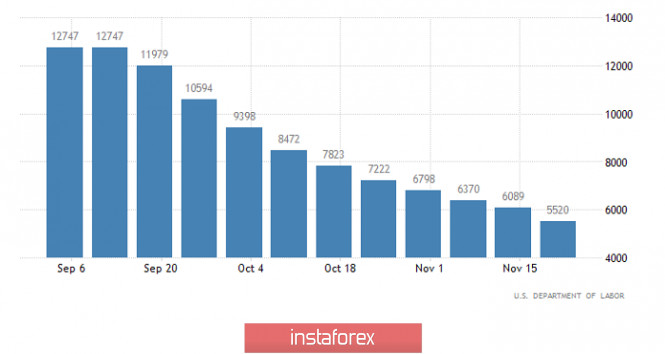 Investors will closely monitor any information regarding the progress of the Brexit talks, and this will be decisive. Given the fact that the parties have been standing still for several years, it is unlikely that any miracle will happen today. Rather, we are expecting disappointment. However, there is a high probability that the parties will take a pause today and try to minimize the number of public statements. If this happens, market participants will have no choice but to carefully study the contents of the report of the United States Department of Labor. And the forecasts for it, frankly, look frightening. From a formal point of view, everything is just fine, since the unemployment rate should fall from 6.9% to 6.8%, and 590,000 new jobs might have been created outside of agriculture. The thing is, if these forecasts are confirmed, it will indicate a sharp slowdown in the pace of labor market recovery. Consequently, the economic recovery process is also halted. And this is what Federal Reserve Chairman Jerome Powell is afraid of, gently hinting that it’s time for lawmakers to stop doing all sorts of nonsense, and finally adopt a program to support the economy. But Congress and the Senate did not listen to Powell’s words, and instead they continued to engage in the usual fuss of putting sticks in the wheels of their political opponents. Therefore, the Fed has no choice but to assume the role of the savior of the American economy on its own, through another program of quantitative easing, or its variations. And this is a softening of monetary policy, which is not very pleasant for investors. In general, if the forecasts are confirmed, the dollar may well weaken against the pound.

Number of new jobs created outside of agriculture (United States): 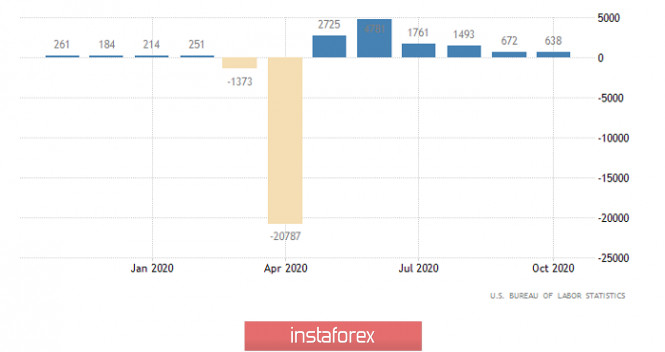 During an intense upward movement, the GBPUSD pair reached the 1.3480/1.3500 resistance area, where it immediately stopped and, as a result, pulled back. A sharp change in quotes in high speed led to the development of an overbought factor in the market, which may affect the volume of long positions.

As for volatility, acceleration has been observed for several consecutive days, which is confirmed by a high ratio of speculative transactions.

Based on the quote’s current location, you can see the consolidation process within 1.3432/1.3466.

Looking at the trading chart in general terms, the daily period, you can see that the medium-term upward trend has approached the 2019 high.

We can assume that the consolidation move within the 1.3432/1.3466 range will not last long on the market and a new acceleration will soon appear. Based on the overbought factor, the existing rollback can be replaced by a full-fledged correction in the direction of 1.3400-1.3350.

An alternative scenario of market development will be considered if the price stays above 1.3500.

From the point of view of a comprehensive indicator analysis, we see that the indicators of technical instruments unanimously signal a buy, due to the fact that the quote is at the conditional peak of the medium-term trend. 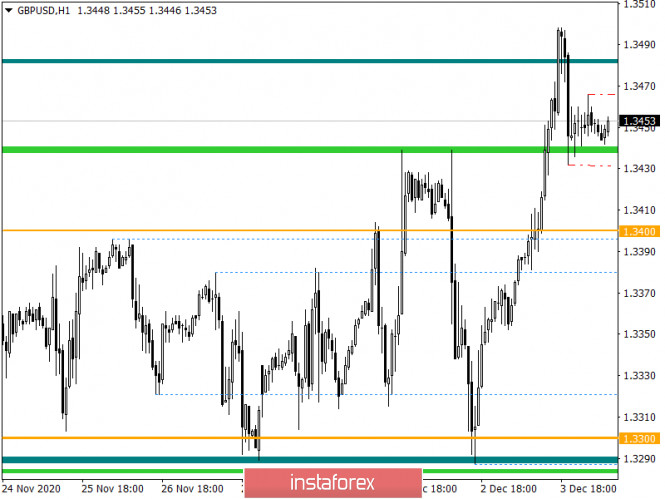