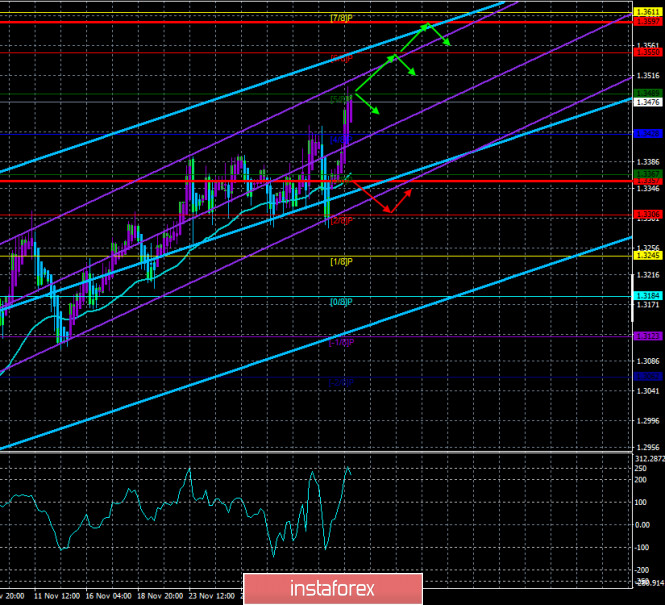 The British pound on Thursday, December 3, with new forces again rushed up. During the day, this currency rose again by more than 100 points. Thus, after a week of relative flat, the upward trend is resumed. At least that’s the conclusion we can draw right now. Well, I don’t want to talk about the fundamental reasons. By and large, the only thing that is currently available to traders is a whole bunch of rumors, comments, statements, messages that relate to the Brexit trade negotiations. And none of them are specific or official. Thus, the pound may continue to grow on the same hopes and faith of traders that a trade deal will still be concluded. Speculative growth is also possible, which is currently observed in the European currency.

In recent months, when trade negotiations between the UK and the EU began, the vast majority of media and experts have been skeptical about the trade deal and the negotiations themselves. The most important factor that could prevent the parties from reaching an agreement was time. Just 9 months (and less) to reach a huge agreement is very short. The EU negotiated with Canada or Australia for years before agreeing on terms of trade. All the forecasts made by the media, journalists, and ourselves have come true. The parties did not have time to agree to a certain point that would allow them to slowly ratify the deal and maintain “free trade” from January 1. Yes, now, according to many media outlets and EU and British diplomats, the deal is at the “finish line”. However, there is very little time left. This means that both parliaments will not have time to study the multi-page document in detail. This means that there won’t be time to make adjustments. There won’t even be time to think about it. But everyone knows the proverb “if you hurry, you’ll make people laugh”. Thus, it is safe to say that London and Brussels did not have time to agree. They have only intensified the negotiations, and even if they do, they are catastrophically out of time. Boris Johnson said that the talks should last until November 15 at most. A huge number of politicians and diplomats said that this week should end everything. We can only watch what is happening as spectators. Unfortunately, if the euro/dollar pair shows a fundamentally unjustified but clear upward trend, then it is unclear what is happening for the pound/dollar pair. This is not a flat or a trend that can be worked out. This is some kind of “upward swing”. The British currency seems to continue to be in an upward trend, however, it changes direction every day. As a result, technical indicators do not even have time to react to what is happening. As a result, it is very inconvenient to trade this pair now, although formally the upward trend remains.

Based on all of the above, you need to do what traders are already used to doing in the last four years. To wait. Wait for the parties to complete the negotiations or completely fail them. Wait for Michel Barnier or David Frost to make an official statement. Wait for what both Parliaments will say later (after all, they can block the current version of the deal). See if both sides and both Parliaments have time to ratify the agreement (if it is reached at all). Wait for the pound to leave the hurricane it has been in recently. Of course, we do not dissuade anyone from trading, but just looking at the charts sharply reduces the desire to open trade deals on the pound/dollar. 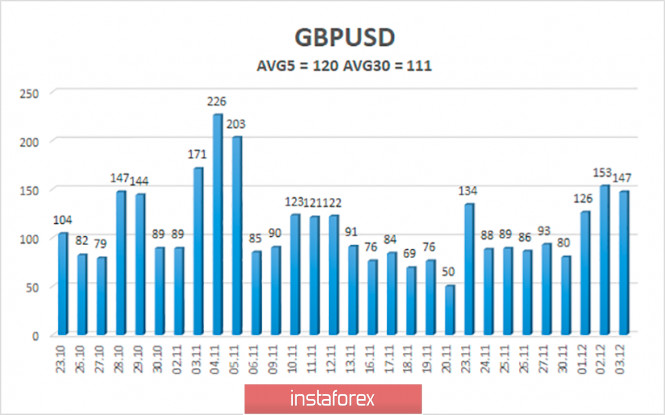 The average volatility of the GBP/USD pair is currently 120 points per day. For the pound/dollar pair, this value is “high”. On Friday, December 4, therefore, we expect movement inside the channel, limited by the levels of 1.3357 and 1.3597. A reversal of the Heiken Ashi indicator downwards signals a new round of downward movement.

The GBP/USD pair on the 4-hour timeframe is now in a new round of upward movement. Thus, today it is recommended to open and stay in long positions with targets of 1.3550 and 1.3597 until the Heiken Ashi indicator turns down. It is recommended to trade the pair down again with targets of 1.3306 and 1.32324575 if the price is fixed below the moving average line. In general, now the movement is very similar to a flat or “swing”. This is not a good time to trade.