The growth of the British pound against the US dollar still limits the very small probability of a trade deal for the UK’s exit from the European Union. The issues in dispute are still the same – fishing issues, as well as mutually acceptable terms of trade competition with equal conditions for both subjects. Let me remind you that there is less time left until the end of the year, when the Brexit issue should be finally resolved, and the chances for a deal are fading. Well, all this could be assumed, and the exit of the United Kingdom without an agreement is largely already taken into account in the price of the British currency.

The situation with COVID-19 is still far from stable, especially in the United States of America, where the increase in the daily number of people infected with coronavirus is still very high. In such conditions, investors are not in a hurry to open a deal to buy the “British”. To better understand this, we will immediately go to the technical picture for the GBP/USD currency pair. 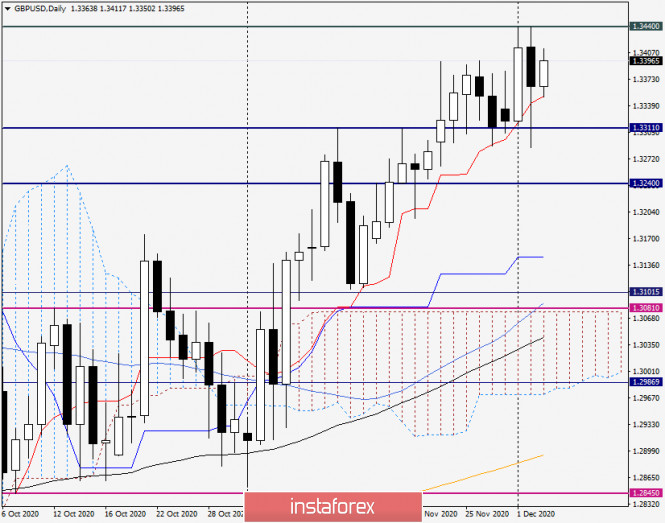 However, as a result of the rise, the pair broke through the important and strong resistance of sellers at 1.3310, after which it continued its upward movement and reached 1.3440. However, the growth stopped and the pair began to consolidate. As you can see, a pullback was given to the broken resistance of sellers in the area of 1.3300, after which the quote bounced up quite strongly, leaving a long shadow at the bottom.

As a rule, after such candles, which were formed at yesterday’s trading, you can expect a subsequent strengthening of the quote with a high degree of probability. At the moment of writing, the pair is trying to continue its upward trend and is trading near the iconic level of 1.3400. Strong support for the quote is provided by the Tenkan line of the Ichimoku indicator. If the growth continues and today’s trading closes above the resistance of 1.3440, it will be time to hope for reaching the important psychological and technical level of 1.3500. I believe that near this level, the pound/dollar will suspend possible growth for some time and will consolidate. The further direction of GBP/USD will be largely influenced by tomorrow’s statistics on the US labor market, which will be published at 14:30 London time. However, at the moment, the main trading idea for this currency pair is to buy it after corrective pullbacks. 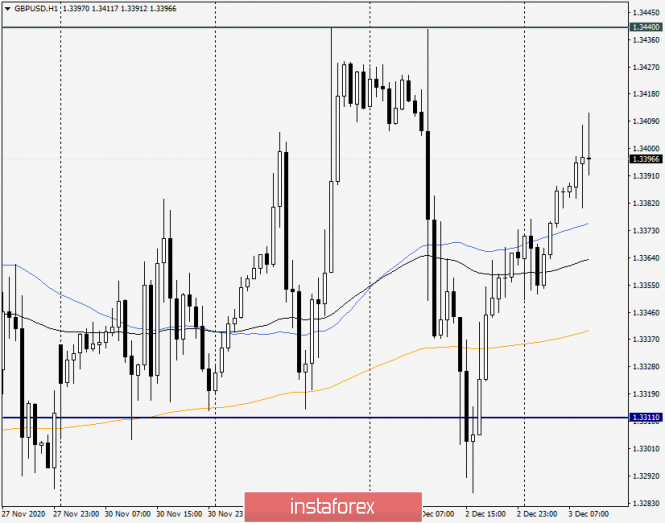 Taking into account the fact that the pair is trading above the moving averages used on the hourly chart (50 MA, 89 EMA, and 200 EMA), a decrease to each of the indicated moving averages can be used to consider opening buy trades since each of these moving averages can provide good support for the pair and turn it in the north direction. Thus, I recommend considering opening long positions on GBP/USD after short-term declines to the levels of 1.3380, 1.3355, and 1.3343. At the same time, if bearish patterns of Japanese candlesticks appear on the four-hour, hourly, or even daily timeframes after the rise to 1.3440, a signal will appear to open sales. However, according to the general technical picture, the main trading idea for this currency pair is to buy from the prices indicated above.