We waited for fairly good entry points to appear yesterday afternoon. Let’s take a look at the 5-minute chart and talk about what happened and where you could make money. In my forecast, I focused on the breakdown of support at 1.3339 and recommended opening short positions after it was updated from the bottom up, which happened. I marked the entry area on the chart. As a result, the pair quickly collapsed to its next support at 1.3294, and the downward movement was more than 40 points. Then a false breakout at 1.3294, where I recommended long positions, led to a market reversal and a recovery to the 1.3386 high. 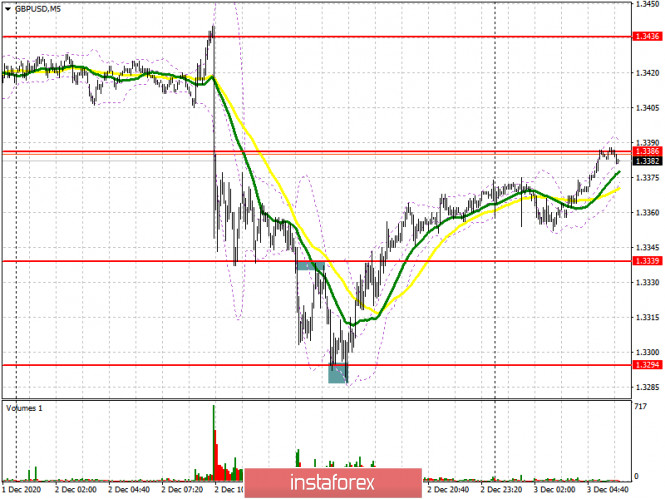 The initial task of the bulls is to maintain control over the 1.3339 level and a lot depends on this. The fact that buyers managed to return it yesterday indicates the presence of a fairly large number of optimists who believe in the conclusion of a trade agreement. Forming a false breakout at the 1.3339 level will result in a signal to buy the pound. In this case, one can count on an attempt to return to the resistance area of 1.3386. Getting the pair to settle above this range and testing it from top to bottom will open a direct way for GBP/USD to a monthly high of 1.3436, where I recommend taking profit. Only good news on the Brexit trade agreement can open new levels around 1.3509 and 1.3563. If the pound is under pressure in the first half of the day, and the bears achieve a breakout of 1.3339, I recommend postponing long positions until yesterday’s low at 1.3294 has been tested, which is last week’s major support. From it, you can open long positions immediately on a rebound, counting on a correction of 25-30 points within the day. A larger low is seen around 1.3251, where one can also expect a good rebound on the initial test.

Sellers of the pound have retreated from the market again amid rumors that the parties are about to agree on the main issue of the fisheries, which could lead to a trade agreement in its raw form. The initial target is to protect resistance at 1.3386, where a false breakout will weigh on the pair and lead to a renewed low at 1.3339. The next goal will be a breakout and getting the pair to settle below 1.3339. Testing this level from the bottom up produces a good signal to sell the pound in hopes to pull it down to the 1.3294 and 1.3251 areas, where I recommend taking profits. Bad news on the trade deal will cause GBP/USD to fall to 1.3194 and 1.3114 lows. If the bulls manage to regain the 1.3386 level, then it is better to take your time with short positions. The optimal scenario for selling the pound will be unsuccessful consolidation above 1.3436. I recommend opening short positions immediately on a rebound from a new high in the 1.3509 area, counting on a downward correction of 25-30 points within the day. Pound sellers can also count on weak data from the UK services sector today, which will entail a slowdown in economic growth in the fourth quarter of this year. 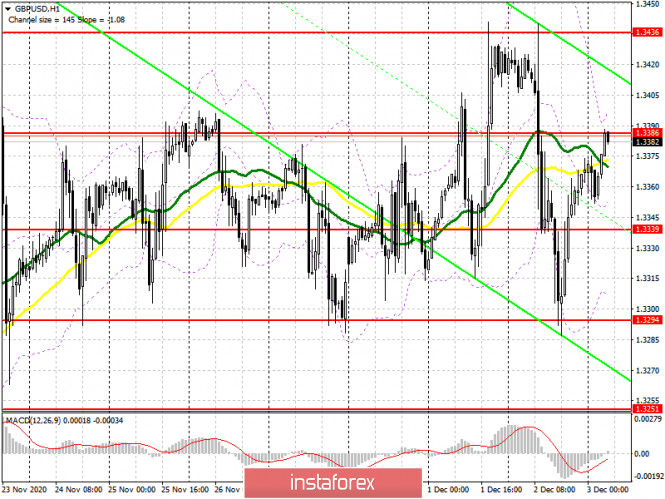 The Commitment of Traders (COT) report for November 24 showed an increase in long positions and a small inflow of short ones. Long non-commercial positions increased from 27,454 to 30,838. At the same time, short non-commercial positions only slightly grew, from 47,200 to 47,968. As a result, the negative non-commercial net position was -17,130, against – 19,746 a week earlier. This indicates that sellers of the British pound retain control and it also shows their slight advantage in the current situation, but the market is beginning to gradually come back to risks, and reaching a trade deal will help it in this.

Trading is carried out just above 30 and 50 moving averages, which indicates the bulls’ attempt to restore the pound’s growth.