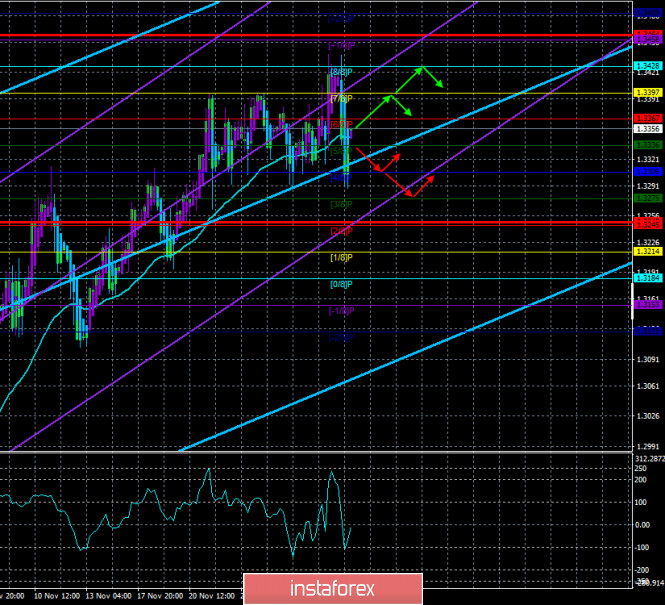 The British pound, which has been trading in a 100-point side channel over the past week, made a significant upward leap yesterday and left the limits of this channel. Left to return to it in a few hours and work out its lower limit – the level of Murray “4/8”-1.3306. Thus, the pound remains either flat or “swing”. However, whatever you call this movement, the essence remains the same: it is extremely inconvenient to work it out, and it is impossible to predict the further movement of the pair. Thus, formally, the upward trend in the pound sterling remains, however, this is of little use. This is not to say that the markets are currently in a state of panic or passion. There’s nothing to panic about. In America, nothing is happening right now (except for ordinary speeches by Jerome Powell and ordinary macroeconomic statistics), and in the UK, everyone has been waiting for the results of negotiations on a trade agreement for several weeks or even months. Thus, you can only panic now because of the possible absence of a trade deal, which is still very likely. But in this case, the pound should fall, not rise. We still do not see any reasons for the strengthening of the British currency, except for speculative ones. It seems that, as in the case of the euro currency, the pound is simply in demand among major players, which leads to its growth. In this case, sooner or later, the collapse of quotes of this currency will follow.

Meanwhile, it became known that with the arrival of Joe Biden as President of the United States, nothing will change in relations between China and the United States. At least not right away. Biden said the other day that he was not going to “take immediate action”. “And this applies to the current duties,” the future US President stressed. Thus, in 2021, Washington and Beijing are likely to resume their trade negotiations. At the moment, the following duties continue to apply against Chinese imports: 25% on Chinese goods worth $ 250 billion and 7.5% on Chinese goods worth $ 120 billion. And the new agreement (signed in January 2020 and called the “first phase”) provides for the purchase of industrial goods by the Chinese side in the United States for 75 billion, agricultural products for 40 billion, and energy carriers for 50 billion. Discussions on the “second phase” have not even started yet.

At the same time, it became known that there were no violations in the process of elections, voting, and counting in the United States. This was stated by US Attorney General William Barr. His office examined all the circumstances of the vote count and did not reveal any large-scale violations and falsifications that Donald Trump spoke about. Mr. Barr also explained that the police checked all electronic voting machines that could distort the results, which the US President insisted on, but did not find any errors or incorrect operation of them. Trump himself continues to act on two fronts. On one, he continues to fight (or create visibility) for the past elections, trying to cancel their results, on the other – to prepare for the 2024 elections. “It was a great four years. We’re trying to get another four years. If not, we’ll see you in four years,” Trump said at the Republican Party Convention.

Meanwhile, it became known that London slightly lowered its requirements in the “fish issue”. British media reported that Boris Johnson gave the go-ahead to reduce the requirement to return to the UK a certain amount of catch in British waters by European fishing vessels. David Frost’s offer is now 60% (previously 80%). However, despite this concession, the difference of opinion between the parties on this issue alone remains very wide. At the very beginning of the discussion of this issue, Brussels proposed to return from 15% to 18% of the fish catch. Michel Barnier, head of the EU negotiating team, believes the next 48 hours will be crucial. He reported this to the 27 ambassadors of the EU countries. Barnier also said at a briefing in Brussels that differences remain on three main issues.

Thus, even if the deal is eventually signed, the pound may in any case begin to fall in the near future. If we continue to recommend traders to follow the trend for the euro/dollar pair, because the trend for this pair is convenient and it can and should be worked out, then in the case of the pound/dollar pair, the movements are very unstable, inconvenient and frankly “torn”. Thus, despite the fact that there is still an upward trend, we believe that this pair should be traded very carefully or not at all. As for the prospects for the pound, even if the deal is signed, the markets have worked this out a long time ago. Thus, it may now turn out a paradoxical situation: the deal will be signed and the pound will collapse down. Now all the fundamental and macroeconomic factors speak in favor of the fact that the British currency should start a new fall. And if you look at 2021, nothing will change, and we believe that the decline will continue next year. The “Scottish” issue, the damage from Brexit (in any case, with or without a deal), the “ultra-deep” monetary policy of the Bank of England, the weakness of Boris Johnson, who is still completely losing the fight against the “coronavirus” and still cannot sign a trade agreement with the EU. In general, there are a huge number of problems and the UK can’t get away from them. Given the baseless growth of the British currency in recent months, which was initially interpreted as a banal correction before a new fall, the pound may now fall for a long time and strongly. 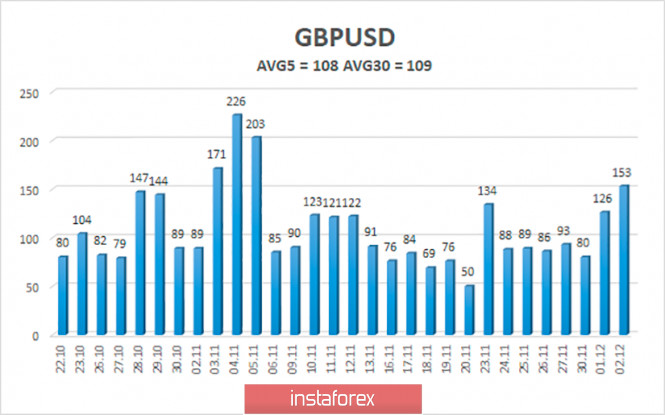 The average volatility of the GBP/USD pair is currently 108 points per day. For the pound/dollar pair, this value is “high”. On Thursday, December 3, therefore, we expect movement inside the channel, limited by the levels of 1.3248 and 1.3464. A reversal of the Heiken Ashi indicator to the top signals a new round of upward movement.

The GBP/USD pair is currently in a downward movement on the 4-hour timeframe. Thus, today it is recommended to open new long positions with targets of 1.3397 and 1.3428 if the Heiken Ashi indicator turns up. It is recommended to trade the pair down again with targets of 1.3306 and 1.3275 if the price remains below the moving average line. In general, now the movement is very similar to a flat or “swing”. This is not a good time to trade.