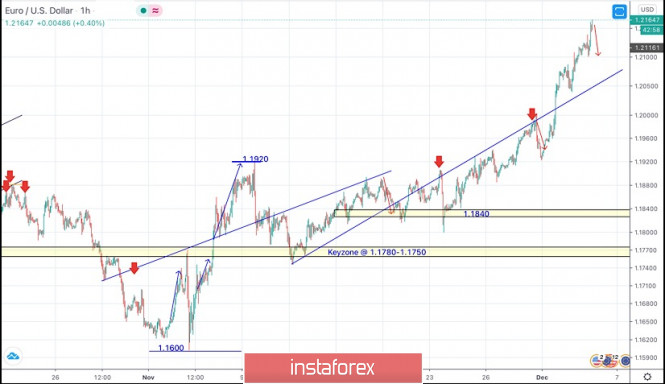 After such downside movement that took place in November, evident signs of bullish reversal were demonstrated around the depicted price levels of 1.1600.

That’s why, another upside movement was expressed towards 1.1950-1.1980 where the depicted trendline failed to offer sufficient resistance.

Further upside movement is being demonstrated towards 1.2160 where a false breakout to the upside may be expressed as a possible bearish reversal signal.

Hence, Bearish closure below the mentioned price zone of 1.2100 is needed to turn the intermediate outlook for the pair into bearish and enhance a quick bearish decline towards 1.1920 and 1.1840.

Currently, Conservative traders should be looking only for SELL Positions. Bearish Closure below 1.2100 should be waited for confirmation. Exit level should be placed above 1.2160.