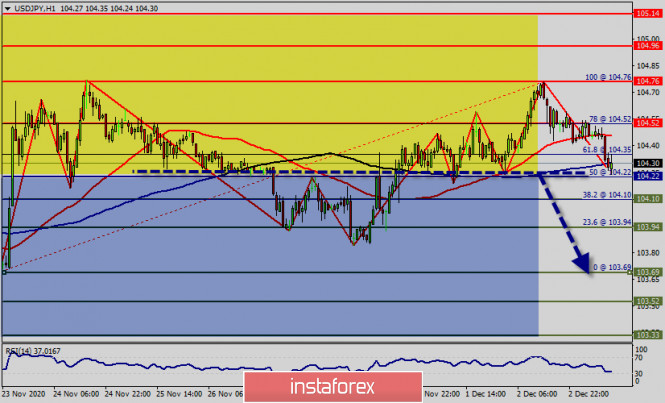 USD/JPY : The 104.22 pair is representing psychological level on the H1 chart. Also, the level of 104.22 represents a daily pivot point for that it is acting as major resistance/support this week.

Factly, the USD/JPY pair movement was debatable as it took place in a narrow sideways channel for a while. The market showed signs of instability. Amid the previous events, the price is still moving between the levels of 104.76 and 103.69.

The pair is still in a downtrend, because the USD/JPY pair is trading in a bearish trend from the new resistance line of 104.76 towards the first support level at 104.22 in order to test it.

The daily resistance and support are seen at the levels of 104.76 and 104.22 respectively. In consequence, it is recommended to be cautious while placing orders in this area. Thus, we should wait until the sideways channel has completed.

The price spot of 104.76remains a significant resistance zone. Therefore, there is a possibility that the USD/JPY pair will move to the downside and the fall structure does not look corrective.

In overall, we still prefer the bearish scenario as long as the price is below the level of 103.69. Furthermore, if the USD/JPY pair is able to break out the bottom at 103.69, the market will decline further to 103.19.

However, it would also be sage to consider where to place a stop loss; this should be set above the second resistance of 104.96.