AUD/USD is trading at 0.7427 and it seems to have enough momentum to continue higher. The price is pressuring a strong resistance area, a valid breakout suggests further growth. The price is almost to register a new higher high which indicates strong buyers.

USD continues to drop versus its rivals, not only against the AUD, as the ADP Non-Farm Payrolls Employment Change has come in worse than expected. The economic indicator was reported at 307K, versus 433K expected.

Today, the US ISM Services PMI, Final Services PMI, and the Unemployment Claims could bring high action on AUD/USD. Some poor figures could boost the price, while better than expected to could help the greenback to rebound.

AUD/USD Trading In The Green! 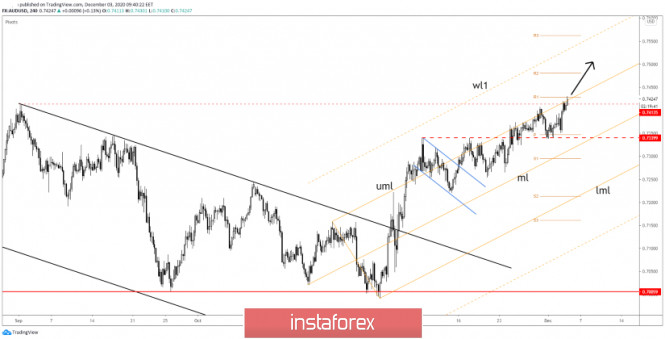 AUD/USD rallies after retesting the 0.7339 static support (resistance turned into support). Now it has passed above 0.7413 static resistance and it seems unstoppable. Closing and stabilizing above the R1 (0.7428) and above the upper median line (uml) of the ascending pitchfork signals further growth towards the R2 (0.7480), 0.7500, or up to the first warning line (wl1).

A valid breakout above 0.7413 former high confirms an upwards continuation. Still, you should be careful because the US data could bring high volatility at the end of the week. The NFP, Average Hourly Earnings, and the Unemployment Rate will be released tomorrow.

The breakout through the upper median line (uml) is somehow expected as the rate has continued to stay near this dynamic resistance, failing to come back to retest the median line (ml).

Stabilizing above 0.7413 suggests buying as AUD/USD could approach the 0.75 psychological level. A bullish closure above the R1 (0.7428) could represent a bullish signal.

Technically, the outlook remains bullish as long AUD/USD stays above the 0.7339 static support.