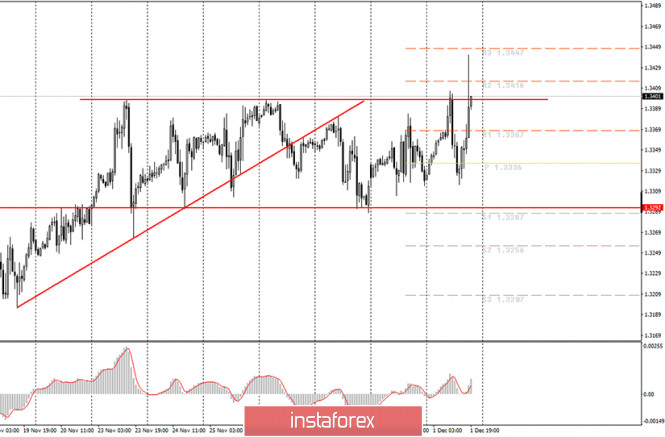 The GBP/USD pair’s movement on Tuesday was even more upbeat and unpredictable than the EUR/USD pair. The pair’s quotes have been trading inside the channel for more than a week with borders near the levels of 1.3292 and 1.3397. After rebounding off the upper limit of this band, the price fell 60-70 points, afterwards a new round of upward movement abruptly began and exceeded the horizontal channel by 40 points. But this was not enough to gain a foothold above the channel and at the time of this writing, the quotes remain inside it. Naturally, it was impossible to predict such movements during the day. Trading within such a narrow horizontal channel is generally not recommended. The euro/dollar pair’s quotes were in a two-hundred-point channel for four months, within which there were excellent short-term trends, which could be traded. The pound is stuck in a much narrower range, within which trends cannot be found. Therefore, we advise you to wait until the pair leaves the horizontal channel, and only then should you consider the possibility of opening new positions.

Fundamentals for the pound/dollar pair were strong on Tuesday. Manufacturing PMIs in the UK and US were unlikely to be the reason for the pound’s strong gains in the afternoon. The speech of Bank of England Governor Andrew Bailey had absolutely nothing to do with it, since the euro and the pound were simultaneously rising in price, which means that it was about synchronous sales of the dollar or purchases of the euro and the pound. Federal Reserve Chairman Jerome Powell delivered a speech, but it took place when both pairs had already gone up 60-80 points. Maybe the markets played out Powell’s speech in advance? No, because Powell did not mention anything important, and the text of his speech was known even days earlier. Powell reiterated that the coming months will be difficult for the American economy due to the pandemic and also despite the invention of two vaccines. He said the same thing several times already. Thus, none of Tuesday’s events can be linked to what is happening on the market.

No major events scheduled for tomorrow in the UK, so focus will be on the US. However, this is only according to the calendar. In fact, traders ignore macroeconomic reports now, and Powell’s second speech in Congress will be identical to the first, so he will probably not say anything new. But we might receive news from the UK regarding the trade talks with the European Union. Traders have been waiting for this news for several weeks, but they still have not received any. But sooner or later they will appear?

1) Traders failed to overcome the 1.3397 level, and so the pair has just been trading in a horizontal channel for a week. Therefore, long deals are irrelevant now. You have to wait for a new upward trend or until the 1.3397 level has been overcome in order to be able to expect the return of the upward trend, and then you can aim for 1.3416 and 1.3447.

2) Short deals, from our point of view, are more convenient now, and for a number of reasons. However, since the price is inside a horizontal channel, in order to open short positions, novice traders are advised to wait until the price settles below its lower border of 1.3292 and only after that should they consider the possibility of opening short positions with targets at support levels of 1.3256 and 1.3207.