The first half of the day was quite interesting for traders, but then it did not show anything good during the US session, trading was mostly around the middle of the horizontal channel (1.3348). Let’s take a look at the 5-minute chart and break down the trades. In my morning forecast, I recommended opening short positions when a false breakout is formed in the resistance area of 1.3348. You can see how the bulls made an unsuccessful attempt to rise above the middle of the horizontal channel at 1.3348, after which a false breakout was formed (I highlighted the area of the false breakout on the chart). Then, when testing 1.3348, a signal to sell the pound appeared from the bottom up. The first downward movement brought about 40 points, but the bears have not yet reached the main target. No larger downward movement and the price returned to the 1.3348 level during the US session. The bears tried to form another sell signal in the middle of the US session, similar to the morning entry, but nothing sensible came of it.

Before examining the technical picture of the pound and running to buy it, let’s take a look at what happened in the futures market last week. Lack of clarity on the trade agreement, along with the lockdown of the British economy in November, clearly does not add optimism and confidence to buyers of the pound. However, the expectation that leaders will still be able to make concessions and find the necessary common ground on the key issue of fisheries leaves hope that the pound will continue to rise, as the report tells us. The 4-week growth of the negative delta was interrupted, and we did not see a major fall in the pound. This is the first signal of an impending market reversal. The Commitment of Traders (COT) report for November 24 showed an increase in long positions and a small inflow of short ones. Long non-commercial positions increased from 27,454 to 30,838. At the same time, short non-commercial positions only slightly grew, from 47,200 to 47,968. As a result, the negative non-commercial net position was -17,130, against – 19,746 a week earlier. This indicates that sellers of the British pound retain control and it also shows their slight advantage in the current situation, but the market is beginning to gradually come back to risks, and reaching a trade deal will help it in this. 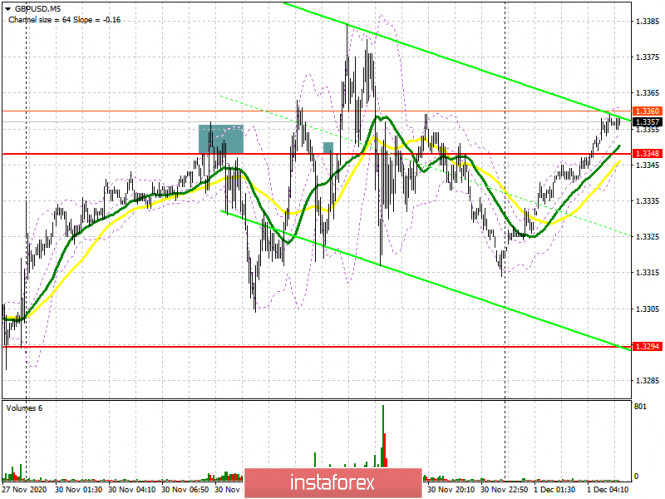 As for the technical picture of the pair, buyers of the pound need to protect support at 1.3348. We can expect the pair to recover until trading is conducted above this range. A false breakout in the 1.3348 area will be another signal to open long positions in order to return to the upper border of the horizontal channel at 1.3395, where I recommend taking profits. We are unlikely to overcome this range if we do not receive good news on the trade deal. In case the pair settles above 1.3395, you can further build up long positions while aiming for 1.3453 and 1.3509. In case the pound is under pressure and it falls below the 1.3348 level in the first half of the day, it is best to hold back from long positions until the lower boundary of the horizontal channel at 1.3294 has been tested, which we did not reach yesterday. A false breakout there will be a signal to open long positions in hopes to continue trading in a horizontal channel under the bulls’ control. If it is not active in the 1.3294 area, it is best to buy the pound immediately on the rebound from the 1.3251 low, or even lower in the 1.3194 area, counting on an upward correction of 20-30 points within the day.

The initial task of pound sellers is to return support at 1.3348 under their control. Getting the pair to settle below this range and testing it from the bottom up, similar to yesterday’s sales, which I analyzed a little higher, forms a good entry point to short positions, which will open a direct road to the low of 1.3294, as the pair’s succeeding direction depends on it. Receiving negative news on the trade deal will surely pull down GBP/USD to the lows of 1.3251 and 1.3194, where I recommend taking profit. The longer the uncertainty about the trade agreement with the EU persists, the stronger the pressure on the British pound will grow. If the bulls continue to push the pound up, it is best not to rush to sell, but wait until a false breakout forms in the resistance area of 1.3395 and open short positions only after that. I recommend selling GBP/USD immediately on a rebound from the high of 1.3453, or even higher from the resistance of 1.3509, counting on an upward correction of 20-30 points within the day. 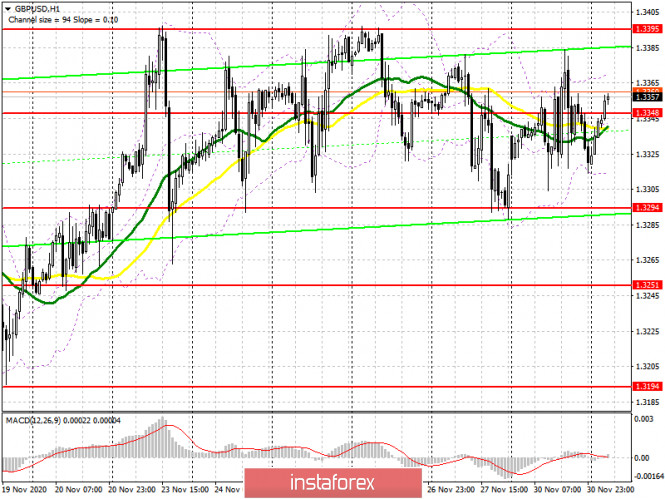