Today we use the Elliott wave theory to identify in which phase of this bullish cycle we are in EURUSD. According to our analysis we are in the final fifth wave of the upward move that started in March at the lows around 1.0630. 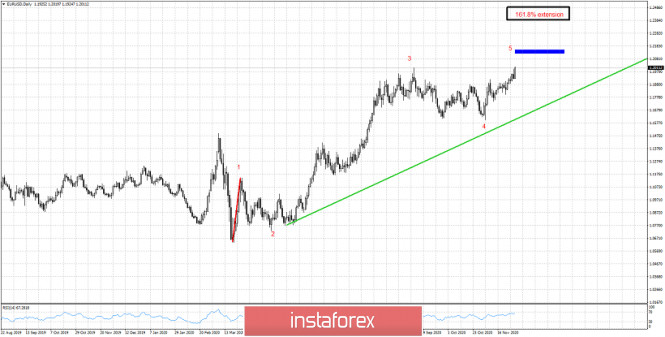 EURUSD is currently inside a bullish wave formation from 1.06 lows. So far we with high degree of certainty we can say that waves 1,2,3 and 4 have been completed and we are inside the final upward wave, wave 5. An extension of wave 5 equal to 161.8% of wave one will bring EURUSD to 1.24-1.2440 area. However the most probable outcome would be for wave five to be equal to the first wave and reach 1.2130 where our first target is and where we expect to see a medium-term top. Wave 5 has started at recent lows at 1.1597 and so far there is no clear 5 wave formation in order to assume wave five has been complete. Only a reversal below 1.16 will confirm that the entire upside wave pattern is complete. Until then we expect price to continue higher to finish its fifth wave around 1.2130.

The Financial Times criticized Citibank analysts for an implausible forecast for bitcoin.

Technical Analysis of ETH/USD for March 3, 2021