The GBP bulls were unimpressed by the upward revision to the UK Final Manufacturing PMI, as mixed Brexit headlines weigh on the pound. 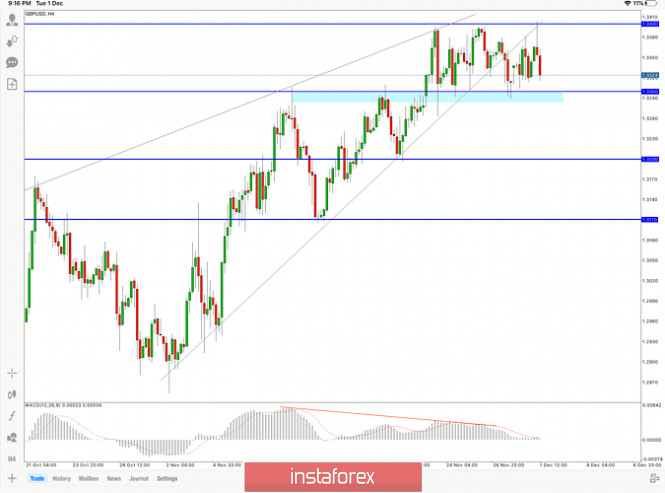 GBP/USD has retreated from the 1.34 level as EU and UK negotiators are sending mixed messages about the chances for a Brexit deal can be clinched this week despite sticking points.

Monday’s inverted hammer, bullish candlestick, on the daily chart directed the GBP/USD buyers towards the November high near 1.34. However, on the 4-hour chart, we can see that a shooting star occurs after the failure to breach above 1.34. This indicates the price could start falling. The long upper shadow represents the buyers who bought during the day but are now in a losing position because the price dropped back.

Since last week, the GBP/USD exchange rate has been testing the resistance level formed by the weekly resistance at 1.340. GBP/USD trims monthly gains while declining in the last week to re-test 1.3300. The GBP/USD pair ended trading in a consolidation mode between 1.34 – 1.33. Alternatively, the monthly high near 1.3400 adds to the upside filters. Attempts to break above the ceiling of 1.3400 have been unsuccessful, yet there is still room for a breakout. However, any subsequent move up is more likely to meet resistance near the top barrier at 1.3390- 1.34.

On the downside, the formation of bearish divergence ( MACD) suggest a reversal to the south could occur. If a breakout below 1.33 round figure mark is seen, the trend reversal from MACD bearish divergence is confirmed. This would probably ignite an impulsive downside push back towards 1.320 region mark.