Several experts from various European banks agreed that we are even four or five years away from the proof of the digital euro concept.

In today’s panel entitled “Upgrading money to the digital age: bringing the digital euro”, participants agreed that the current task is primarily to familiarize everyone with the specifics of the digital euro, postponing real implementation for the future.

Central bank digital currencies, or CBDC, have been an extremely popular topic of debate in recent years, but especially since the onset of the COVID-19 pandemic.

Austeja Sostakaite from the European Central Bank said the ECB would not make a decision on whether to pursue the digital euro by mid-2021, which contradicts the ECB president’s estimates earlier this month. The question for now, he said, is: “How do you introduce the euro into the ecosystem and how does it work with commercial bank money?”

Swedish Riksbank advisor Carl Andreas Claussen said the central bank was finalizing its e-krona concept review in February, but similarly estimated that the real launch would be “in four or five years”.

“There are several legal issues and it is such a big issue that we cannot make a decision. We need political support. We proposed to the parliament that it set up a committee of experts to take care of it,” he said.

Sweden is part of the European Union but not the euro area, which means it keeps its own currency. The internal use of cash in Sweden is among the lowest in the world.

The ETH/USD pair is approaching the level of $620.52. So far the local high was made at the level of $592.29, because it hit the 38% Fibonacci retracement on the Weekly time frame. The momentum is strong and positive, so the breakout back above the $620.52 is just a matter of time. The levels of $600 and $578.89 will now act as temporary technical support for the price. The is no indication of the up trend reversal on the higher time frames like weekly and monthly.

The up trend on the Ethereum continues and the next long term target for ETH/USD is seen at the level of $700, so any correction or local pull-back should be used to open the buy orders. Moreover, the bulls has hit the 38% Fibonacci retracement located at the level of $587.53 on the weekly time frame chart, but the current up trend is still valid. This scenario is valid as long as the level of $360 is broken. 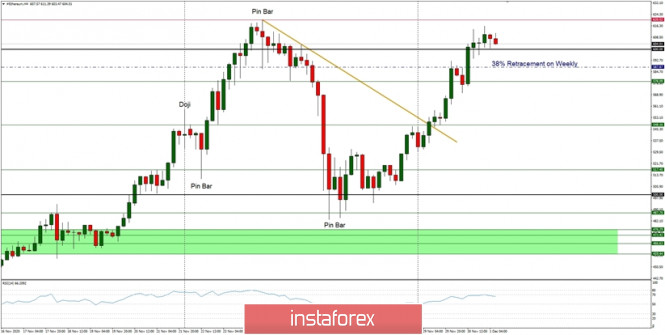